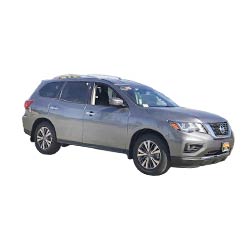 What 2020 Nissan Pathfinder Trim Level Should you Buy? What is the Difference Between Trims?

Families today need more out of their vehicles than ever before. Three-row SUVs have been a growing segment of the market thanks to their spaciousness and capability. As a result, there are more options available for consumers to consider.

The 2020 Nissan Pathfinder is one of these three-row SUVs. It has room to seat up to seven people and a very impressive towing capacity for this vehicle class. Plus, all trim levels have some very enticing driver assistance features, something that will undoubtedly appeal to safety-conscious families.

For 2020, the Pathfinder does not get any significant updates. This is likely due to the many changes that happened just last year. The Pathfinder is still available in four different trim levels. The popular Rock Creek Edition, available on the middle two trims, continues to be an option for those who want a more rugged-looking version of the Pathfinder.

Before deciding which model to buy, it is important to have a firm grasp on the differences between the trim levels. Here is a guide that aims at helping consumers do just that.

Compare the 2020 Nissan Pathfinder S vs. SV Trim Levels. What is the difference?

The entry-level S trim has the same engine underneath as all other versions of the Pathfinder. It is a powerful 3.5L V6 with direct injection. This engine is capable of producing 284-horsepower and 259 lb-ft of torque. Working alongside this engine is a continuously variable transmission. Like all models, the S is available in both 2WD and 4WD versions. Either way, the Pathfinder is capable of towing up to 6,000 pounds. Despite the size and power of its engine, the Pathfinder still manages to get 20 MPG in the city and 27 MPG on the highway.

Drivers will find that the Pathfinder lives up to its name with a few off-road enhancing features. Standard on all models are front and rear stabilizer bars, an independent multi-link rear suspension, and an independent front suspension. Dual Flow Path shock absorbers are also featured.

The S trim level rides on 18-inch wheels. It comes with roof rails, LED daytime running lights, and power outside mirrors featuring turn signal integration. Also standard is a body-colored rear spoiler. Rounding out the exterior features for the Pathfinder is rear privacy glass along with UV-reducing solar glass in the front.

Inside the Pathfinder, consumers will find a decent list of standard equipment for the S trim. Drivers get comfort features such as tri-zone automatic climate control and an in-cabin micro filter. There are also many features aimed at convenience, such as two 12-volt power outlets, remote keyless entry, and push-button start.

As for the seating, the driver gets a six-way manually adjustable seat including lumbar support. The front passenger gets four-way manual adjustment. In the second row, drivers get the EZ FLEX seating system that allows for easy access to the third row. This may be the biggest draw for families with multiple children.

The second row has the ability to fold completely flat for convenience. As for the third row, it can both fold flat and recline for comfort. With both the rear rows of seating folded down, the Pathfinder reveals an impressive 79.5 cubic feet of space. Even with these seats up, there is a roomy 16.2 cubic feet of space.

NissanConnect is the standard infotainment system. It runs on an 8-inch touchscreen. While it does have Bluetooth, it is lacking other common smartphone integration technologies. Other tech features for the S trim include satellite radio, an auxiliary jack, steering-wheel-mounted audio controls, and HD radio.

Going up to the SV trim adds quite a bit to the 2020 Pathfinder. Although this trim is mechanically the same, several important features are added. For example, the SV gets intelligent automatic headlights. It also gets fog lights.

Inside, the SV gains the Nissan Intelligent Key. This allows drivers to lock and unlock their vehicle by simply pressing a button on their door if the Pathfinder can detect the key fob. Also added to the SV is a remote engine start system and a HomeLink universal transceiver.

Small upgrades to certain features are also made to the SV. The power windows in the front get a one-touch auto up/down feature. For the variable intermittent windshield wipers, there is now a speed-sensing feature. Inside the visor, the vanity mirror gains illumination. The rearview mirror is now auto-dimming and a third 12-volt power outlet is added.

More upgrades are made to the interior. The driver's seat gets eight-way power adjustment. The lumbar adjustment feature remains manual. Driver aids are added to the SV as well. Standard features here include a blind spot warning, rear cross traffic alert, and intelligent cruise control. A tire pressure monitoring system is standard on the S, while the SV and above add an individual tire display as well as the easy-fill alert feature.

Drivers can choose to purchase the Rock Creek Edition of the SV trim level. It costs around a grand more and adds styling touches. These models have dark-finished aluminum-alloy wheels, specialized exterior badging, and black overfenders. On the inside, this trim has leatherette-appointed seats with cloth trim and unique Rock Creek Edition badging. The interior trim is metallic. Available on these models are heated front seats as well as a heated steering wheel. Going with the Rock Creek Edition also gives drivers the option of adding navigation and NissanConnect Services.

The SV gives consumers many convenient features. The Rock Creek Edition, in particular, has a lot to offer and will likely appeal to many consumers.

Compare the 2020 Nissan Pathfinder SV vs. SL Trims.  What is the difference?

Deciding to go with the SL version over the SV will mean paying quite a bit more. At the same time, the SL has many popular features that consumers today are after. Again, this version of the Pathfinder is identical mechanically as the other models.

LED low-beam projector headlights are added as standard equipment for the SV. It also gets a reverse tilt-down feature for the side mirrors. One of the most significant additions is a motion activated liftgate, a feature that is very popular with busy families.

Sitting down inside the SL will reveal welcome lighting as well as a 120-volt AC power outlet. The driver's seat itself now has ten-way power-adjustment with two-way power lumbar support. This seat, as well as the driver side mirror, gain a memory feature for convenience. For the first time, the front passenger seat gets four-way power adjustment. Both the first and second row get leather-appointed seats.

Other nice upgrades seen in the SL trim include leather-appointed door trim and heated front seats. Even the second-row outboard seats are heated in the SL. A heated steering wheel is also standard. The interior trim is now metallic but appears different than the Rock Creek Edition trim. Stainless steel front kick plates are included with the SL.

Standard for this trim is the Nissan Navigation system. NissanConnect Services are added and allow drivers to unlock, lock, and start their vehicle remotely. These services also allow drivers to take advantage of the Google Assistant or Amazon Alexa feature. With the purchase of the Pathfinder, consumers get six months of the premium plus package and three years of the select plan for the NissanConnect Services.

The only upgrade as far as safety features is the intelligent around view monitor. This feature utilizes cameras in the side view mirrors, front grille, and above the rear license plate. Through these cameras, the around view monitor can show drivers their vehicle's position in relation to any objects in the area. Drivers can choose a variety of angles to see on the split-screen. Considering it can even alert drivers when objects are moving nearby, it can be incredibly useful when parking.

Drivers once again can choose to go with a Rock Creek Edition of the Pathfinder when they go with the SL. The only significant difference between the SL version and the SV one involves the seats, which get upgraded to leather here. All-in-all, the SL has a lot of attractive features, whether drivers go with the standard or Rock Creek Edition.

Compare the 2020 Nissan Pathfinder SL vs. Platinum Trim Levels.  What is the difference?

The final and most extravagant version of the 2020 Nissan Pathfinder is the Platinum. This is the only trim level to get eye-catching 20-inch aluminum-alloy wheels. Buyers should be aware that these wheels can make the ride of the Pathfinder a bit stiff, however. Also exclusive to the Platinum is a dual-pane panoramic moonroof. A tow hitch receiver featuring a seven-pin wiring harness, which was available on lower trims, becomes standard here.

Inside the Platinum trim is a power tilt-and-telescoping steering column. The steering wheel also gains a memory function here, something very useful when the Pathfinder regularly has two different drivers. The seating inside of this trim is upgraded to perforated leather in the front and second row. Front seats are also "climate controlled" in this trim, which simply means they are both heated and ventilated. Wood-tone interior trim further sets this model apart from the others.

One significant upgrade in this trim involves the stereo. Up until this point, the Pathfinder had only six speakers. Inside the Platinum trim lives a BOSE sound system that has an impressive 13-speakers. This stereo system also utilizes acoustic wavelength technology, a method of getting more powerful sound out of smaller speakers.

Available only inside the Platinum trim is a tri-zone entertainment system. It features dual head restraint-mounted 8-inch screens as well as two pairs of wireless headphones. There is a remote control and the driver and front passenger can control the system through the infotainment screen. Adding this system adds an HDMI input in the back.

As for the safety features, drivers looking for more advanced aids will be disappointed. The main upgrades found in the Platinum trim have more to do with comfort and convenience, rather than performance or safety. Still, the new features are likely good enough to attract some consumers.

When it comes down to it, an argument can be made for all four of the trim levels offered by the 2020 Nissan Pathfinder. The entry-level model may not be flashy, but it does give drivers a few useful driver aids and tech features. Plus, it is powered by the same exact engine as the upper trim levels. Moving up to the SV trim does add a few sought-after amenities as well.

For most consumers, jumping up to the SL trim is going to make the most sense. The hands-free liftgate, navigation, and interior upgrades make it a much more enjoyable vehicle. Drivers with small children may be tempted to go with the Platinum trim for the rear seat entertainment system. However, this trim comes with a steep price increase and a loses some finesse thanks to the larger wheels.

Consumers who choose the SL version of the 2020 Nissan Pathfinder will find themselves with a well-rounded vehicle that is perfect for day-to-day driving as well as weekend adventures.
Did you find this article useful?
Please rate this page. Select a star rating from 1 to 5 below:

Save Money on a 2020 Nissan Pathfinder:
Find New Car Clearance Prices - Many Vehicles are Selling Below Dealer Invoice Prices.

Every dealer offers a secret price. Many prices are below invoice. Find yours here.
2020 Nissan Trim Level Buying Guides: