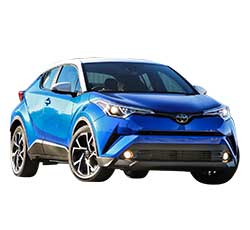 What 2018 Toyota C-HR Trim Level Should you Buy? What is the Difference Between the Trims?

Once the king of the subcompacts, superminis, and other small economy cars, Toyota has recently fallen behind its competitors in the segment. Its Yaris subcompact has seen steadily declining sales for almost a decade before Toyota was forced to replace it with a rebranded version of its competitor Mazda 2.

Against this backdrop, this year’s release of Toyota’s newest car - a compact crossover called the C-HR - has been eagerly watched by Toyota fans and competitors alike. Will the Toyota C-HR mark the start of Toyota’s triumphant return into the subcompact market, or is it just the latest in a series of missteps?

So far, the 2018 Toyota C-HR appears to be neither. Its unique looks, good driving feel, spacious interior, and generous features have made it quite an attractive vehicle, but on the other hand, its weak engine and lack of all-wheel drive have kept it from being considered as a competitor for the top spot in the class.

Still, the 2018 Toyota C-HR can be a strong choice for many buyers. As this is the first year that the car is available in the United States - it has already been available in Japan and Europe for a year - the selection of trim levels is fairly limited.

There are only two models currently on offer: the mid-range XLE and the high-end XLE Premium. If the sales of the 2018 C-HR go well, it is not unlikely that Toyota will add to both ends of this lineup, with an even nicer high-end model and one or two less expensive budget models with a few less features than the XLE. But for now, buyers have only those two models to choose from.

In this guide, we examine both of the models closely, contrasting them between each other and identifying the major differences in features that each one offers. This should serve as a helpful primer for potential C-HR shoppers who are not sure which of the two trims might suit them best.

Compare the 2018 C-HR XLE vs XLE Premium Trims. What is the difference?

While the XLE is the lowest trim level of the new Toyota C-HR, it definitely does not feel like a base model. Toyota probably has a more basic version of the C-HR currently in the works, but for now this nicely loaded up trim level represents the lowest rung on the C-HR equipment ladder. It goes without saying that power locks, windows and mirrors, as well as keyless entry, air conditioning, and cruise control are all standard.

The C-HR also comes with plenty of good upgrades rarely seen among entry-level models. It rides on 18-inch alloy wheels, which looks especially striking when combined with the car’s unique visual architecture. It also comes with dual-zone automatic climate control and steering wheel audio controls. The other method for controlling the audio is the 7-inch infotainment screen that has a USB port and supports voice commands, HD radio, and Bluetooth.

It is also filled with other great convenience features, from a rearview camera and heated side mirrors to LED daytime running lights. It also comes with the full Toyota Safety Sense equipment set. Toyota Safety Sense includes forward collision warning with pedestrian detection and automatic braking, adaptive cruise control, active lane control, and automatic high beams. This adds up to a lot of standard equipment for the model, and makes it a solid selection for an entry-level subcompact SUV.

However, it does come at a cost, as the Toyota C-HR XLE is notably more expensive than most other cars in the segment. Part of that is because it is equipped with features that are more in line with a mid-range model from its competitors.

The other part of it comes from Toyota’s decision to position the C-HR slightly upmarket from its rivals, giving it a little extra features and a slightly higher price to make it a more exclusive subcompact rather than a budget one. The C-HR XLE does not offer any optional packages or major factory-installed options, and comes solely with front-wheel drive and an automatic transmission.

The XLE Premium is an upgrade on the XLE and the highest trim level currently available on the Toyota C-HR. Just like the XLE does not feel like an entry-level model, the XLE Premium does not quite feel like the top of the lineup. It mostly adds a few useful features and styling cues to the already abundant amount of features that the base XLE offers.

The XLE Premium comes with its own seats and upholstery. The seats are still clothed in fabric, but they are more sporty in design and the material is of a higher quality than on the XLE. The front seats are equipped with seat heaters on this model. The XLE Premium also gets a few extra safety features. It comes with blind spot monitors and rear cross traffic alert, as well as an electronic parking brake system.

The rest of the added features are relatively small. The side mirrors have built-in puddle lights, and the keyless entry system is upgraded to a smart key setup that automatically unlocks the doors when you touch the handle if you have the key on your person. The XLE Premium also adds fog lights to the front bumper, and the driver’s side seat gets a powered lumbar support adjustment.

Like the base XLE, the XLE Premium does not offer any further options, with no optional packages available and no extra factory upgrades to select from. Both trim levels do have a large range of dealer-installed accessories to customize the car, including items like wheel locks, roof cross rails, and bumper and side sill protectors.

Unusually for pretty much any automotive genre, the 2018 Toyota C-HR actually has a very narrow trim level range. There are only two trim levels to choose from - the XLE and the XLE Premium - and they are very close to each other in terms of both equipment and price.

The XLE Premium lists for less than $2,000 over the price of the regular XLE. The lack of either budget version or a luxury version may dissuade some buyers looking that the C-HR, but for most people either of the two trim levels are likely to satisfy the key desirable features. Both come with the most important in both passive and active safety equipment.

The XLE Premium adds blind spot monitors, but those can also be considered a convenience feature, saving drivers half a second to have to check their blind spot. However, for those that have been driving a car with that equipment for a while, using it could be a hard habit to shake.

Beyond those main considerations, the XLE Premium is basically a slightly nicer version of the base XLE model, which is already fairly solidly equipped. Given the small price difference between the two, the best choice depends on each driver’s personal preferences. The XLE is a good model to start, with an upgrade to the XLE Premium if there are some key features that are missing.

Buying Tip: To avoid overpaying on a new car, shop prices online first. Get up front pricing before you walk into a dealership. We recommend the following free services; Car Clearance Deals, NADAguides, CarsDirect & Motortrend.
These free services will offer you the lowest prices and supply you with multiple competing price quotes. You will know the best price before you visit the dealer.
Save Money on a 2018 Toyota C-HR:
Are you Shopping for a New Vehicle? Find the Best Deals with "Free - No Hassle" Prices Quotes.