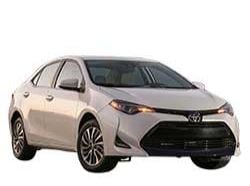 What 2018 Toyota Corolla Trim Level Should you Buy? What is the Difference Between the Trims?

As one of the most common cars on the road today, the Toyota Corolla has made a name for itself as a good and inexpensive all-around compact car. Good gas mileage and solid reliability make it an attractive car for pretty much everyone, as do its good safety scores. And while its performance and handling are not much to get excited about, the car continues to do well year after year in spite of that.

The 2018 Toyota Corolla is pretty much identical to last year’s model, including carrying over all seven of its different trim levels. That is slightly more than most of its competitors in the compact sedan class, but it does give the car a degree of granularity when it comes to selecting features and options. This guide will give you a breakdown of what each trim level offers and help you decide which one is right for you based on your driving needs. We will also point out a few of the high-value or high-impact options that particularly stand out to us in the current 2018 Toyota Corolla trim level lineup.

Compare the 2018 Corolla L vs LE Trims. What is the difference?

The Corolla L is the price leader model in the lineup, and its primary attractive point is its low list price. As such, it is relatively sparse compared to other Corollas and offers a limited selection of options: there are no special packages for this model and only a few colors to choose from.

Despite that, it is still a fairly nice car. It has a nice Entune™ infotainment system, which includes a 6.1-inch touchscreen, a rear-view camera, voice command recognition, Bluetooth, and a six-speaker audio system. It also comes standard, as do all Corolla models, with Toyota Safety Sense P, which is a system incorporating forward collision warning, automatic emergency braking, pedestrian detection, lane keep assist, automated cruise control and automatic high beam control.

The LE is a small step up from the L, at less than $500, adding an armrest to the rear seat, climate control, larger 16-inch steel wheels, keyless entry and a small digital screen on the instrument cluster.

The LE can also be upgraded with the Premium Package, which replaced the steel wheels with alloys and the 6-inch infotainment with a 7-inch system that supports music streaming, navigation apps and satellite radio. You can also opt for the Premium Package with Moonroof instead which, predictably, adds a moonroof to the above for an extra $400.

As the Corolla L is primarily designed for fleet sales and the occasional lease special advertisement, you are rarely going to come across one on a dealer lot. In general, the keyless entry and the climate control are important enough features for most drivers that the small price increase for the Corolla LE is easily worth it.

The optional packages also offer a very good value. The Premium Package with Moonroof, for example, costs only slightly more than a moonroof on its own does in most of the Corolla’s competitors. If any of the equipment added in the Premium or the Premium with Moonroof packages looks appealing to you, then the upgrade is easily worth the money.

Compare the 2018 Toyota Corolla LE vs LE Eco Trims. What is the difference?

Despite a $400 higher list price, the LE Eco is more of a ‘side-grade’ than an upgrade to the LE. It includes some features that are absent on the LE, but it lacks others. It is the most fuel-efficient of the Corollas, with a maximum of 40 miles per gallon on the highway, as well as the most powerful, at 140 horsepower to the other Corollas’ 132.

The 8 horsepower make little difference in terms of performance however, as the LE Eco is optimized towards efficiency. To that end, it also borrows the smaller steel wheels from the Corolla L and adds a rear spoiler for lower air resistance. It also comes with a standard moonroof. Unlike the LE, it does not have any available packages, so it is impossible to equip it with the more advanced infotainment.

Given the amount of tradeoffs that the LE Eco demands in terms of standard and available equipment, it is hard to recommend it over the more versatile LE. It gets between 2 and 5 mpg more than the other Corolla models, which is noticeable, but not game-changing considering how efficient the entire slate of models is. If you drive long highway distances and want to maximize your fuel economy, the Eco is an appealing option. For the average driver though, the Eco offers only around $100 in annual savings, making it a less attractive choice than the LE.

Compare the Corolla SE vs LE Trims. What is the difference?

The Corolla SE adds sport-flavored visuals to both the interior and the exterior of the car, giving it a slightly more attractive and upscale look. It is roughly $1,500 more expensive than the LE, it includes a unique mesh-pattern grille, 17-inch alloy wheels, a rear spoiler, a sport-design steering wheel, a sport-themed instrument cluster and a mixed cloth-leather upholstery.

In terms of practical gear, the SE adds multi-LED headlights, heated side mirrors and rear disk brakes rather than the drums found on the other models. It also comes with a sport mode toggle and steering-wheel mounted paddle shifters to move the continuously variable transmission through simulated gears.

The SE Premium is the only optional package, and it is very similar to the Premium Package with Moonroof from the LE, though it also includes a smart key system with push button start and is not available without a moonroof.

From a safety standpoint, the rear disk brakes are a major feature that most other manufacturers include as a standard, with Toyota being one of the holdouts that still puts rear drum brakes on their lower-priced models.

Drum brakes are not as good at stopping the car as disk brakes, wear down faster, and are more difficult - and therefore more expensive - to replace. That alone is a good reason to upgrade to the SE, especially since it is still priced very competitively compared to other compact cars with similar equipment.

Compare the Corolla SE vs SE 6MT Trims. What is the difference?

The Corolla SE 6MT is the manual transmission version of the Corolla SE. It has the same set of features as the SE, except it replaces the CVT that is standard on all other Corolla models with a six-speed manual transmission. Because of this, it lacks the regular SE’s sport mode toggle and paddle shifters, as both of those worked by altering the shift logic of the automatic transmission.

The SE 6MT is roughly $1,200 more expensive than the SE model, but all SE 6MT Corollas include the SE Premium package as standard. As that package has an MSRP of $1,535, you are actually saving around $300 by going with the manual transmission.

If you are looking for a manual transmission Corolla, the SE 6MT is the only choice available. If you can drive both manual and automatic transmission cars, the 6MT can offer a good value, as it provides some savings off of the price of the SE Premium package. Beyond that, the rarity of the manual transmission acts as a potent deterrent against both car thieves and friends or relatives looking to borrow your car. That said, expect the SE 6MT models to be fairly rare among Toyota dealers, so unless there is one in your vicinity, looking for it could be more trouble than it is worth.

Compare the 2018 Toyota Corolla SE vs XLE Trims. What is the difference?

The XLE serves as the biggest jump in both price and features among the 2018 Toyota Corolla trim levels. It does not have the performance features from the Corolla SE, such as the spoiler, the sport mode or the rear disk brakes, but it has plenty of other features that make it attractive.

It has heated front seats and is upholstered in leatherette, as well as a standard moonroof. The XLE offers only one optional package - the Premium Audio Package. That package includes all of the features of the SE Premium package, as well as integrated navigation and the Entune App Suite.

While the App Suite is not a substitute for Apple CarPlay or Android Auto, neither of which is available on the Corolla, it does make it easier to use some of your phone’s apps while driving using the car’s touchscreen.

In terms of value for the money, most buyers will find the XLE to be the best return on their investment out of the entire Corolla line. Our only reservation is the lack of disk brakes on this model, which is remedied on the XSE.

Compare the 2018 Corolla XLE vs XSE Trims. What is the difference?

The Corolla XSE is the same as the Corolla XLE, just with the styling and performance features from the SE model. That includes the custom grille, spoiler, larger alloy wheels, sport steering wheel and rear disk brakes. The paddle shifters and the sport mode also make a comeback, though the manual transmission is not available for the XSE. It matches those with the comfort features of the XLE, like the heated leatherette seating and moonroof. Similarly, it can also be upgraded with the Premium Audio package.

At $750 more than the XLE, the value of the XSE depends on whether you enjoy the more sporty look that it provides and if you want the rear disk brakes. If the lack of disk brakes does not worry you, then the XLE model is a more cost-effective option that still gets you all the features that you can get on the Corolla. If you opt for the disks, then the XSE is your choice. While it is the most expensive model of the Corolla at a list price of $22,780, most other cars in the segment range from $25,000 to $30,000 or more when fully loaded.

The 2018 Toyota Corolla is a very good value vehicle, which serves to explain its consistent popularity with car buyers. Drivers looking for something fairly basic will probably want to go with the Corolla LE. It is very inexpensive compared to both the competition and the other Corolla trim levels, while still delivering all of the key features.

The LE Eco is the trim to choose if you are looking to maximize mileage, while the SE is our pick thanks to its use of rear disk brakes along with a good feature set. The XLE and the XSE offer the most features for the money out of the entire Corolla lineup though, with the XSE our favourite choice due to its value and equipment.

Save Money on a 2018 Toyota Corolla:
Are you Shopping for a New Vehicle? Find the Best Deals with "Free - No Hassle" Prices Quotes.