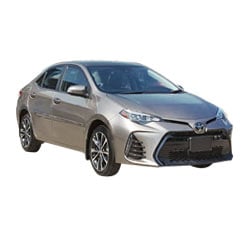 What 2019 Toyota Corolla Trim Level Should you Buy? What is the Difference Between Trims?

There’s no overlooking the 2019 Toyota Corolla’s popularity. It has long remained one of the most popular cars in America. Drivers love this compact sedan’s excellent reliability and everyday comfort. Solid gas mileage also makes the Corolla a great choice for drivers looking to save money. Meanwhile, a roomy design seeks to satisfy families.

Once known for its Plain Jane exterior styling, the Corolla now has a far cooler look than previous generations. This is especially true for the upper trim levels.

Toyota gives you six Corolla trims to choose from: L, LE, LE Eco, XLE, SE, and XSE. Let’s see how these trims differ from each other.

Compare the 2019 Toyota Corolla L vs LE Trims. What is the difference?

With a starting price of less than $19,000, the base Corolla L will save you the most cash. Powering the Corolla L is a 1.8-liter, four-cylinder engine. It develops a decent 132 horsepower. This is the same engine found throughout the lineup. An automatic CVT seeks to conserve fuel.

Although the Corolla L may not be quite as stylish as some of the other trims, it does look rather nice. LED headlights come standard. Unfortunately, a less attractive set of steel wheels with hubcaps are found on this base model.

Budget-minded drivers will not be disappointed with the Corolla L’s list of standard equipment. A height-adjustable driver’s seat and a tilt/telescoping steering wheel help you to sit comfortably. Meanwhile, a six-speaker sound system provides your entertainment. Some of the other standard features include Bluetooth, a voice-activated touch screen, and Siri Eyes Free.

Like every new Corolla, the base L trim comes standard with Toyota Safety Sense. This advanced safety package includes driving aids like a pre-collision warning and lane departure alert with steering assist. A backup camera is also found on the Corolla L.

Although the Corolla LE isn’t a big notch above the base Corolla L, it does provide just a few more creature comforts. Upgraded upholstery makes the cabin look more attractive. Dual-zone automatic control, heated exterior mirrors, and keyless entry are also featured on the LE trim.

A Premium package is optional for the Corolla LE. It enhances the sedan’s curb appeal by adding a more stylish set of 16-inch machined alloy wheels and LED running lights. Along with the package comes an upgraded 7.0-inch Entune infotainment system.

Compare the 2019 Corolla LE vs LE Eco Trims. What is the difference?

While the Corolla LE Eco is equipped similar to the LE trim, it’s specially tuned to save you more fuel. Unique suspension tuning and Valvematic engine technology help the Corolla LE Eco to return up to 40 mpg. The LE Eco trim’s engine develops 140 horsepower, which is slightly more than the other trims. A smaller set of 15-inch wheels and tires also help boost fuel economy. If you’re willing to sacrifice some efficiency, you can improve the Corolla LE Eco’s styling by adding the LE’s optional Premium package.

Compare the Corolla LE Eco vs XLE Trims. What is the difference?

The Corolla XLE is basically a more luxurious version of the lower LE trim. It adorns Toyota’s SofTex upholstery, which is a simulated-leather fabric. A power-adjustable driver’s seat and heated front seats also come standard in the Corolla XLE. Some of the XLE’s other equipment consists of a 7.0-inch infotainment display, keyless ignition, a navigation app, and satellite radio.

In terms of exterior styling, the Corolla XLE has just a bit more flair than the LE and LE Eco trims. Upgraded headlights with LED accents and LED taillights come standard. This trim also features a better-looking set of 16-inch alloy wheels.

Compare the Corolla XLE vs SE Trims. What is the difference?

The Corolla SE has a sportier character. In contrast to the lower trims, it comes outfitted with shift paddles for the automatic transmission and a Sport driving mode. This is the only trim in the lineup that can be equipped with a manual transmission.

On the inside, sports seats and race-inspired gauges give the Corolla SE a more exciting feel. A leather–wrapped steering wheel enables you to maintain a solid grip while driving. Toyota’s SofTex upholstery lines the interior. An upgraded Entune Plus infotainment system is optional, which includes a larger 7.0-inch display with navigation.

If you decide to get the Corolla SE with a manual gearbox, you’ll be rewarded with a few extras. Push-button start, a sunroof, and the XLE’s upgraded infotainment system are included.

Compare the Corolla SE vs XSE Trims. What is the difference?

The Corolla XSE features all of the Corolla SE’s sporty upgrades. However, it boasts creature comforts like heated seats and a power driver’s seat. You’ll also enjoy the upgraded Entune infotainment system with integrated navigation. A standard sunroof, push-button start and satellite radio also come standard in the range-topping XSE trim. Aside from unique emblems, the XSE trim looks virtually identical to the SE trim. Be aware that a manual transmission is not offered on the Corolla XSE.

Don’t hesitate to buy the base Corolla L. It comes loaded with ample equipment for a base model. Toyota Safety Sense gives you an extra degree of assurance. When equipped with optional 16-inch alloy wheels, the Corolla LE looks a bit more stylish than the base Corolla L. You can also get features like satellite radio and a sunroof on the LE trim.

Drivers who are interested in maximizing their fuel savings should consider the LE Eco trim. Over the course of a year, the extra gas mileage is bound to make a difference. It’s actually a better choice than the regular Corolla LE. You’ll only be paying an additional $400. To experience just a bit more luxury, step up to the Corolla XLE.

The Corolla SE definitely has a sporty look with its mesh grille and larger 17-inch wheels. Because the Corolla SE has such a cool appearance and an attractive list of features, some people consider it to be the best value in the lineup. Unfortunately, it drives just like the other Corolla trims. On the bright side, you can get the Corolla SE with a manual gearbox. Folks who enjoy changing gears will be able to squeeze just a bit more performance out of the Corolla SE.

As previously mentioned, the 2019 Toyota Corolla only offers a single engine choice. However, Toyota’s Valvetronic engine technology does help the LE Eco trim to conserve more fuel. When traveling at regular highway speeds, you should have no trouble getting up 40 mpg. City gas mileage stands at 30 mpg. Other trims will return 28 mpg in the city and 36 mpg on the highway. Despite the Corolla LE Eco packing an extra eight horsepower, don’t expect to notice a difference in real-world performance.

Most Corolla trims come equipped with a continuous variable transmission. It effectively transfers the available power. However, most driving enthusiasts will describe the CVT as being a tad boring. You will have more fun driving the Corolla SE fitted with a six-speed manual gearbox. When commuting to work and running everyday errands, the enhanced performance is bound to come in handy.

The Corolla delivers a good ride with its standard suspension setup. Although the Corolla SE and Corolla XSE may look sporty, these trims don’t deliver much more driving fun than the other trims. A true performance-tuned suspension is unavailable. Features, such as the sport seats and race-style gauges, are more for show.

All versions of the 2019 Toyota Corolla provide Toyota Safety Sense. This safety package definitely gives the Corolla a clear advantage over some competitors. Nevertheless, car critics have reported flaws in some of the driving aids. The lane departure system does not work at lower speeds. Meanwhile, Toyota’s Dynamic Radar Cruise Control won’t bring the Corolla to a complete halt when approaching traffic.

Toyota’s Entune infotainment system is a breeze to use. While some drivers will be disappointed by the Corolla’s lack of Android Auto and Apple CarPlay, Bluetooth does a good of integrating smartphones. While the standard 6.1-inch touch screen gets the job done, expect the upgraded 7.0-inch touch screen to be more rewarding. Aside from the larger screen, it also comes with a navigation app.

In contrast to competitors like the 2019 Subaru Impreza and the 2019 Nissan Sentra, the 2019 Toyota Corolla doesn’t give you access to a premium sound system. While the standard six-speaker stereo sounds okay, your music may become fuzzy upon dialing up the volume.
Save Money on a 2019 Toyota Corolla:
Are you Shopping for a New Vehicle? Find the Best Deals with "Free - No Hassle" Prices Quotes.