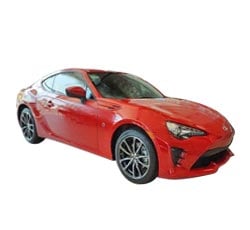 What 2019 Toyota 86 Trim Level Should you Buy? What is the Difference Between Trims?

With a starting price of less than $27,000, the 2019 Toyota 86 remains one of the most affordable pure sports cars on the American market. It’s a great choice for the driving enthusiasts who can’t afford a high-end model. However, available performance upgrades can transform the 86 into a competitive track machine. Meanwhile, decent fuel economy makes the Toyota 86 an especially fun daily-driver. Beautiful styling is another one of this sleek coupe’s highlights.

In the land of inexpensive sports cars, the 2019 Toyota 86 only has a few direct competitors. Many people will be cross-shopping the new 86 with the Mazda MX-5 Miata. While the Nissan 370Z may pack more power, it doesn't feel as graceful as the new Toyota 86.

For 2019, Toyota didn’t make any big modifications to the 86. Nevertheless, a limited-production TRD Special Edition trim has been introduced into the lineup. This means you now have an extra option to choose from at your local Toyota dealer. Let’s find out how the available Toyota 86 trims differ from each other.

Compare the 2019 Toyota 86 Base vs GT Trim Levels. What is the difference?

The least expensive version of the 2019 Toyota 86 is the base model. Most buyers will find it to be quite appealing. Like the rest of the lineup, the base 86 comes standard with a Subaru-built four-cylinder engine. When paired to a six-speed manual transmission, this engine develops a pleasing 205 horsepower and 156 pound-feet of torque. If you decide to opt for an automatic gearbox, total power drops slightly to 200 horsepower and 151 pound-feet of torque. Paddle shifters also come with the automatic transmission, which will rev-match when downshifting.

Despite being the least expensive model, the base Toyota 86 still comes equipped with some valuable performance goodies. While a “track” mode enables you to turn off the stability control system, a sports-tuned suspension with rear stabilizer bars help tighten up the car’s handling. Toyota also offers dealer-installed performance upgrades like a sport exhaust and a track-ready suspension.

In terms of styling, expect the base Toyota 86 to look more appealing than the typical entry-level trim. It has the profile of a classic sports car. LED headlights and twin chrome outlets for the exhaust come standard. You’ll also notice the base model’s 17-inch performance wheels, which accentuate its low and aggressive stance. Some of the alluring paint colors include Neptune, Halo, and Ablaze.

On the inside, the base Toyota 86 features a driver-focused cockpit. Race-inspired features, such as an analog tachometer with a rev indicator and digital speedometer, hint at the car’s sporty intentions. While the sport bucket seats are nice, you’ll have to manually adjust them. A tilt-and-telescoping steering wheel wrapped in leather comes standard as well. When driving fast, the knee support cushions will provide an extra degree of comfort.

While the base Toyota 86 is not big on technology, it does provide some modern features. The 7.0-inch touch-screen display can be controlled using voice commands. An Aha Radio app is built into the interface. You’ll also appreciate the eight-speaker sound system with HD radio. Some of the other standard tech include Bluetooth phone and audio streaming, a USB interface, and keyless entry. Navigation is available as a stand-alone option.

No version of the 2019 Toyota 86 offers a lot of advanced safety technologies. This means the base model won’t force you to make any sacrifices. With that said, an advanced traction control system and a backup camera do come standard. You’ll also benefit from an auto-dimming rearview mirror.

The Toyota 86 GT is roughly $2,100 more expensive than the base model. It comes equipped with the same engine, transmission, and performance features. However, there are more appearance upgrades on the GT trim. A matte black spoiler and an aerodynamic under-body panel accentuate the car’s sleek design. LED fog lights also come equipped on the Toyota 86 GT.

More goodies are found inside the Toyota 86 GT. The biggest highlight is the GT trim’s upgraded driver information display, which uses a 4.2-in. TFT screen. It can monitor performance data like cornering force, engine coolant temperature, and torque curves.

Not only do the seats in the 86 GT feature heated cushions, but they are also covered in leather with contrast stitching. Leather-like knee cushions give the 86 GT an even more luxurious feel. Dual-zone automatic climate control and push-button ignition are featured on the 86 GT as well.

Compare the 2019 86 GT vs TRD Special Edition Trims. What is the difference?

In comparison to the other trims, the limited-production 2019 Toyota 86 TRD Special Edition will be a lot harder to find. Less than 1,500 units were made. Unsurprisingly, it has a steeper MSRP of $32,420.

Although the Toyota 86 TRD Special Edition is not more powerful than the 86 GT, it does benefit from some exclusive performance parts. Stickier tires and upgraded TRD suspension dampers help the 86 TRD Special Edition to take corners at a higher rate of speed. Meanwhile, beefier Brembo brake calipers seek to enhance stopping power. When accelerating aggressively, expect the TRD Special Edition’s free-flowing exhaust to sound especially powerful.

If you’re a driving enthusiast who is looking for a budget-friendly sports car, the base Toyota 86 is a perfect solution. Its low MSRP of $26,500 is hard to beat. You’ll be getting an incredibly fun car that’s efficient and easy to maintain. Drivers praise the manual transmission for its precise shifting.

While dealer-installed performance accessories are available, most people will enjoy driving the base Toyota 86 right out of the box. There’s also a good amount of standard equipment on the base 86. An eight-speaker sound system and a 7.0-inch infotainment screen help keep you entertained.

Although the 86 GT costs more money, it does bring some upgrades to the table. While heated front seats and dual-zone automatic climate control give you a more comfortable driving environment, the upgraded driver information display is a must for the track. While the base 86 and the 86 GT come equipped with identical wheels, a rear spoiler and other styling upgrades make the 86 GT look just a tad more upscale.

To get your hands on the range-topping 86 TRD Special Edition, you’ll have to act fast. This limited-production model will be a bit difficult to find in some areas. The 86 TRD Special Edition may become a collector’s item in the near future. TRD, which is Toyota’s racing division, equips this model with a number of performance goodies. Keep in mind that some of these same features are offered on the lower trims. You can save a lot of cash by choosing either the base 86 or the 86 GT.

Toyota does not give you access to an optional engine. However, there are plenty of performance parts available. While the standard sports-tuned suspension is great for everyday driving, you’ll find the stiffer TRD-tuned suspension to be more ideal for taking laps at the track. In terms of road handling, the available performance tires are just as beneficial.

When preparing to buy a new 2019 Toyota 86, you must decide which transmission to get. To get the most performance out of this sports car, go for the six-speed manual transmission. It enables you to get the most performance out of the four-cylinder engine. Automatic-equipped Toyota 86 models accelerate slower. On the plus side, you can look forward to saving a bit more money at the pump. While the manual version will return a combined 24 mpg, automatic models will deliver a combined 27 mpg.

Most drivers will be more than happy with the standard gauges in the base Toyota 86. If you plan to do some serious driving at the track, the upgraded driver information display will prove to be a very valuable commodity. You’ll have easy access to a lot of vital performance data. Remember, this feature is not available on the base model.

A 7.0-inch touch screen comes standard throughput the lineup. It’s easy to use and displays album cover art when streaming music. While some drivers will be disappointed by the interface’s lack of Apple CarPlay and Android Auto support, you can quickly pair your smartphone using Bluetooth. Navigation is only available as a dealer-installed option.
Save Money on a 2019 Toyota 86:
2019 Toyota Trim Level Buying Guides: