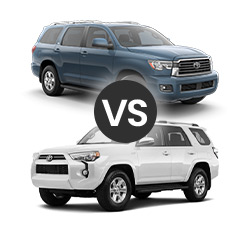 2021 Sequoia vs 4Runner - How do they stack up? What are the differences?

Full-size SUVs are attractive for many reasons. The Toyota Sequoia and Toyota 4Runner are two models that are strong and have plenty of room for gear and/or passengers. Toyota has given them many available high-end features as well, so they really do have a lot to offer. This guide will review what they have in common and, perhaps more importantly, how they differ.

For some, it may be difficult to park the Sequoia. It's going to take up a lot of space in a garage, and it may not fit into some smaller spots. The 4Runner might be more ideal for those who live in urban environments for this reason.

This brings this overview to an important point. Every Sequoia comes standard with three rows of seating, but not all 4Runners have that additional row. In the Sequoia, there could be room for eight or seven passengers, depending on whether the middle row has a bench seat or a pair of captain's chairs. The bench seat would have room for three, while the captain's chairs would only accommodate two in that row. The third row of the Sequoia is wide enough to fit three extra people.

In the 4Runner, four out of the nine available trims can be set up with a third row. This third row can seat two, so the 4Runner could have a total of seven seats. It's not available with captain's chairs, and every 4Runner has a bench seat in its second row.

The 4Runner is large, but it's nowhere near as big as the Sequoia is. Its maximum cargo capacity is 88.8 cubic feet. Behind its second row of seats, it has 46.3 cubic feet of space. If a 4Runner has the third row, this really limits its cargo capacity. The cargo hold behind that third row only has a volume of nine cubic feet.

In terms of style, both vehicles have an imposing presence. This is partly due to their height of their frames and the fact that the sit almost ten inches off the ground. The 4Runner looks a little more agile next to the bulky Sequoia.

LED headlights and LED fog lights are standard in these two Toyotas. The Sequoia has standard LED Daytime Running Lights as well, and it can have chrome, dark silver, or darkened chrome around its fog lights. Both models can have chrome exterior accents to make them look more refined. TRD Pro trims are available, and those come with special badging.

Some of the nicer elements that are available with the 4Runner are 20-inch wheels, cargo baskets or roof racks, a power moonroof and a power liftgate, and automatic running boards. The Sequoia can be configured with front skid plates, aluminum or black running boards, a power liftgate and moonroof, and special side mirrors. Those mirrors can automatically dim, and they can have a reverse tilt-down feature in addition to a memory function and puddle lights.

Neither one of these Toyotas lacks power. They should be able to impress many drivers with their capability.

Many people plan on using their SUVs for towing cargo. While the 4Runner can tow up to 5,000 pounds, which is impressive, the Sequoia can do better. It can tow up to 7,400 pounds when equipped the proper components.

The two models have similar types of transmissions. Both are electronically controlled automatic transmissions, and they have sequential shift mode to give drivers some manual control over shifting. In the Sequoia, the transmission has six speeds, and in the 4Runner, there are five speeds.

Almost all of the Sequoias can either have rear-wheel or all-wheel drive. The TRD Pro trim, which is at the top of the lineup, is exclusively offered as an all-wheel-drive SUV. If a Sequoia has all-wheel drive, it would have a Torsen limited-slip center differential that can be locked into place to enhance traction.

Many Sequoias can have enhanced suspensions. For instance, the TRD Pro has TRD FOX shocks with piggyback reservoirs. The Platinum trim has an adaptive variable suspension, meaning that it can make adjustments based on the road conditions. If the terrain is uneven, then the adjustments will be made so that the ride is softer. When traveling on a smooth highway, then there doesn't need to be as much movement in the shock absorbers.

Toyota has given the 4Runner some extra features to help drivers deal with rugged terrain. Select trims can have Multi-Terrain Select so that their performance can be optimized to the exact conditions, and they can have Crawl Control. This program controls the speed of the SUV by adjusting the throttle and brakes so that the driver can keep all of his/her focus on steering.

While there's a lot to appreciate about how the Sequoia and 4Runner handle themselves, it has to be mentioned that they don't do well with fuel economy. The Sequoia only gets an estimated 13/17 (city/highway) miles per gallon. The 4Runner has slightly better fuel economy, earning an estimated 16/19 (city/highway) miles per gallon.

The Sequoia has some attractive features that will keep passengers comfortable and happy. Every one of its trims has automatic climate control with three zones, a power-adjustable driver's seat, a smart key entry system, and a leather-wrapped steering wheel. The lower trims have cloth upholstery, while the others can have leather or perforated leather. Most trims have heated front seats and power-adjustable front-passenger seats, and some can have heated and ventilated front seats. The second row can also have heated front seats to provide some extra warmth.

Higher trims of the Sequoia can have auto-dimming rearview mirror with HomeLink transceivers. They can have retractable sunshades for the second- and third-row windows, and they can have cargo nets to help with organization.

In the area of technology, the Sequoia has a fairly comprehensive system. It comes standard with a seven-inch touchscreen and the Audio Plus infotainment program. It comes with Apple CarPlay, Android Auto, and Bluetooth. In addition, it includes Amazon Alexa, SiriusXM, and Wi-Fi Connect so that people can stream content, browse the internet, and more easily stay in touch with others while on the road.

Every Sequoia is available with dynamic navigation to provide drivers with turn-by-turn directions. Along with this navigation program, there would be dynamic voice recognition and a point-of-interest search function. On the higher end of the lineup, there could be a premium audio system with 14 speakers. The other options would be to have 12 or eight speakers.

In the 4Runner, there are many of the same components. Though it's the smaller of the two SUVs, it has the slightly bigger touchscreen. It uses an eight-inch touchscreen. The base trim of the 4Runner has all of the standard features that the entry-level Sequoia has. This basic package can be upgraded with navigation. As with the Sequoia, navigation would be available on all trims. The top trims of the 4Runner have standard navigation and JBL sound systems with 15 speakers.

Though most 4Runner trims have dual-zone automatic climate control, the base trim starts out with a manual system. Cloth, SofTex (which is a synthetic leather), leather, and perforated leather are all available as seating material. A cargo net and auto-dimming rearview mirror are optional, and a leather-trimmed steering wheel is standard. The front seats can be heated and ventilated, but the rear seats cannot be heated.

Toyota has made an effort to integrated driver-assist technologies into its vehicles. The Sequoia and 4Runner have many advanced components that can play active roles in protecting people.

The two models have the Toyota Safety Sense P package. It consists of pre-collision braking and frontal collision warning, pedestrian detection, high beams that can automatically turn on and off as necessary, adaptive cruise control, and lane departure alert.

Things go a step further with the Sequoia. Blind spot monitoring and rear cross-traffic alert are standard with this SUV. With these features, drivers can be more aware of vehicles that they might not be able to see.

All Sequoias have sonar systems in the front and rear to help with parking. If the vehicle gets to close to other objects while traveling at low speeds, then alerts would be issued. This program can be found in the 4Runner, but only on select trims.

It can be hard to decide between the Sequoia and 4Runner since both are capable and ready for adventure. As full-size SUVs, they have plenty of space, but the Sequoia has the edge when it comes to passenger comfort and cargo capacity. The 4Runner could feel cramped if its packed full of people.

There are some other differences to keep in mind. The Sequoia has the more powerful engine and it can tow more weight, but it doesn't do as well in the efficiency department. The Sequoia is also the more upscale model, with a comprehensive safety package and several sophisticated interior amenities. The 4Runner does have nice features, but it lacks a few of the extras that the Sequoia has, such as heated rear seats.

Finally, this comparison will end with a brief discussion of pricing. The Sequoia does have more to offer than the 4Runner does, but it's base trim is over $13,000 more expensive than the base trim of the 4Runner. The TRD Pro at the top of the Sequoia's lineup costs $64,325, and the 4Runner's TRD Pro trims has a starting price of $50,745. Obviously, these are pretty significant price differences.

Customers will have to really think about whether the extra cost of the Sequoia is worth it. Do they need the extra seating, cargo space, and power, or will they be fine with what the 4Runner can offer?