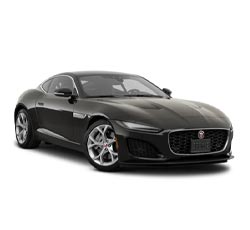 Price Tip:
To avoid overpaying on a new Jaguar F-Type, shop prices online first. Get up front pricing before you walk into a dealership. We recommend the following free services; Car Clearance Deals,   NADAguides,   Motortrend &   CarsDirect
These services will offer you the lowest prices and supply you with multiple competing price quotes. You will know the best price before you visit the dealer.
Jaguar Price Guides::
• Jaguar F Pace Prices
• Jaguar F Type Prices
• Jaguar XF Prices

Despite an overwhelming demand for SUVs of all sizes, there is still very much a place in the luxury market for coupes and convertibles. The 2021 Jaguar F-TYPE can come as either a drop-top or a coupe - your choice. They are fairly similar in terms of standard features and mechanical specs, so the only serious differences are in terms of physical design.

The F-TYPE launched onto the market in 2014 and is still in its first generation. In the time since its launch, Jaguar has listened to critiques offered by buyers and reviewers alike, making necessary changes as they go. And 2021 is no exception. You will find that this year's line-up looks quite a bit different from the 2020 models, and the line-up has been trimmed down to just a few trim levels since some trim levels were not selling as well as others.

So, is the 2021 Jaguar F-TYPE the right small luxury coupe or convertible for you? This review will go over what is new for the model year, the available styles and trim levels, how it drives, and what you can expect as far as fuel economy goes. Hang around until the end to get our final verdict on this sporty little number.

As we already mentioned, Jaguar made some serious changes to the 2021 F-TYPE. The most obvious is the exterior styling. Jaguar added a bigger grille to the front, which has been sculpted in a more swooping motion. The LED headlights and taillights have been reshaped in order to fit with the new undulating movements of the front and rear fascias. Once vertical, they are now oriented more horizontally. This lends to the front end having a sportier and more aggressive appeal.

Inside, you might notice that there is a new reconfigurable TFT screen gauge cluster. It has new graphics that are exclusive to it as well as aspects focused on sport performance, such as the shift light display.

The R has been given more power this model year, now possessing the 575 hp and 516 lb-ft of torque that the old SVR trim level's engine put out. The SVR has been axed from the line-up along with the P380 RWD and P340. A lot of the other features and specs from those vehicles have been shuffled around to the remaining trim levels.

You can get the 2021 Jaguar F-TYPE as a coupe or convertible. You can choose whichever you like for any of the trim levels, including the R, which is kind of in a class all of its own.

Since three of the previous trims have been eliminated, the remaining options on the F-TYPE are the P300, P380 R Dynamic (with standard all-wheel-drive), and the R.

The 2021 Jaguar F-TYPE is undoubtedly cool to look at. But it is also pretty cool to drive. The base trim is strong enough with its 2.0-L turbocharged 4-cylinder engine that generates 296 hp and 295 lb-ft of torque. The V6, however, does not mark a significant upgrade with its 380 hp and 339 lb-ft of torque. This is the engine that comes on the R Design. You can upgrade to the R for a stronger performance, as it has the SVR's old V8 that puts forth 575 hp and 516 lb-ft of torque. Most buyers will likely want to go with the V8 since they will likely prefer power output over fuel efficiency.

Despite being incredibly small inside, the F-TYPE is plush with comfort, as you should expect from a luxury vehicle. The adaptive dampers do a phenomenal job of filtering out road surface imperfections, and even when in Dynamic mode, the ride remains composed and comfortable. There is some noise intrusion from the wind and tires at almost all times, but they are doable compared to the growling of the engine.

The 2021 Jaguar F-TYPE is ultimately a sporty but small vehicle that puts forth a strong performance when it comes to powerful engine options. You also get a ton of standard features. However, the F-TYPE is not the most comfortable vehicle in its segment and lets in far more wind, tire, and engine noise than many of its well-insulated competitors.

How to Calculate The Dealer Cost of a Jaguar F-Type:

Note: All Jaguar F-Type MSRP, invoice and dealer cost dollar figures above are approximate amounts. Prices are subject to change without notice.