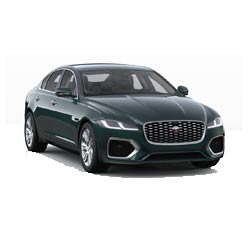 Price Tip:
To avoid overpaying on a new Jaguar XF, shop prices online first. Get up front pricing before you walk into a dealership. We recommend the following free services; Car Clearance Deals,   NADAguides,   Motortrend &   CarsDirect
These services will offer you the lowest prices and supply you with multiple competing price quotes. You will know the best price before you visit the dealer.
Jaguar Price Guides::
• Jaguar F Pace Prices
• Jaguar F Type Prices
• Jaguar XF Prices

If anyone is looking for a premium sedan, the 2021 Jaguar XF would be a great choice. As a Jaguar, it has an upscale vibe and it offers plenty of excitement for anyone who gets behind its wheel. The XF has a modern style and looks classy and sophisticated, and inside its cabin, there are many high-end materials for people to appreciate.

This year, Jaguar has decided to streamline the available XF models. Instead of offering a supercharged V6 and a turbocharged four-cylinder engine, the company has just stuck with the turbo engine. There are, though, two different version of that turbo engine.

In addition, there are now a few different wheel designs and a slightly different front fascia. People who love technology will be pleased to see the standard 11.4-inch curved touchscreen. This curved design should reduce glare and make the front part of the cabin feel very futuristic.

The XF has some kick to it, thanks to a turbocharged two-liter engine. On the P250 version of the XF, there's 246 horsepower, and this is increased to 296 on the P300 version. Given the size of the sedan, this amount of power should be more than sufficient.

Jaguar has put in an eight-speed automatic transmission. At various speeds, drivers should feel that they have the power they need.

It can sometimes be hard to find a sedan with anything other front-wheel drive, so the XF is an intriguing option. The P250 models can come with either rear-wheel or all-wheel drive. The more powerful P300 models are exclusively available with all-wheel drive so that people can have enhanced traction.

Another thing that helps with handling is the Torque Vectoring system. Through independent braking, understeer can be prevented and agility can be significantly improved. This is especially true when taking tight corners at relatively high speeds.

In this car, there's about 37 inches of rear-seat leg room. This isn't extremely generous, but it's also not too small. Two people would be perfectly fine in the back together, and three people would likely be comfortable on short rides around town. The trunk is fairly spacious, with a volume of approximately 18 cubic feet. This makes the XF more practical than a smaller vehicle. Clever storage compartments can keep the cabin from feeling cluttered and disorganized.

The exterior of the XF is quite stunning. It has a foil-tipped grille, interesting wheel options, and an aerodynamic shape. LED exterior lighting helps the sedan stand out as well. A power tailgate is very convenient to use, and the panoramic moonroof brings a lot of natural light into the cabin.

The Jaguar XF uses Pivi technology. The Pivi interface comes with an 1.4-inch curved touchscreen, along with a remote and Apple CarPlay and Android Auto. Wireless charging is standard, and this makes it very easy to maintain battery life on a smartphone. Further, SiriusXM is incorporated into every XF to provide people with more entertainment options. The sound comes through clearly with a Meridian speaker system.

A Pivi Pro interface is available, and upgrading to this program would give the vehicle integrated navigation. The navigation system has a self-learning function so that it can work efficiently and provide people with suggested routes based on traffic and road conditions. Another option is to get an XF with a Wi-Fi data plan. This gives passengers access to all kinds of streaming media, and multiple devices can connect to the high-speed network at the same time.

Some models can be connected with something called an Activity Key. An Activity Key is basically an advanced smartwatch. With this key/watch, people can lock and unlock their doors and start their engines without needing a traditional key fob. This can be very useful for people who frequently go on outdoor adventures in which they don't want to have to carry a bag or have things in their pockets.

Yet another way in which technology is incorporated into the XF is through the Clearsight rearview mirror. This mirror is more than what it seems. It can show the driver a live video feed of the images captured by the rear-facing camera mounted on the back of the car. This means that even if the cabin is full of cargo or passengers, the driver can have a clear view of what's behind his/her Jaguar.

Technology is a reason why vehicles like the Jaguar XF are safer than they've ever been. A driver can have an all-around view of the car when parking or maneuvering in tight spaces. Monitoring systems can alert people when they're getting too close to other vehicles or approaching pedestrians too quickly, and mitigation systems can remedy various situations by correcting steering or slowing the car down.

There's no question that the Jaguar XF deserves its designation as a luxury sedan. It would be a real treat to drive this car because of how it performs, how it looks, and how comfortable it is.
How to Calculate The Dealer Cost of a Jaguar XF:

Note: All Jaguar XF MSRP, invoice and dealer cost dollar figures above are approximate amounts. Prices are subject to change without notice.