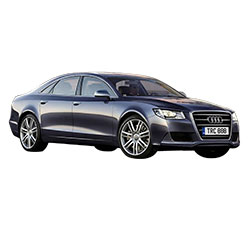 Should You Buy a 2017 Audi A8? Here Are Some Reasons For and Against

Over the years, Audi has experienced a continuous flow of stability and profitability. That is something that is sure to continue thanks to the 2017 Audi A8. The A8 serves as the company's flagship luxury sedan. It appeals to those looking for a high-class ride. Despite the fact that the A8 is an all-wheel-drive vehicle, it offers an aluminum frame that makes it lighter than most its rear wheel drive competitors. Of course, that isn't the only amazing feature this car has to offer.

The 2016 model of the Audi A8 offered plenty enough punch and gleaming visual features to wow critics. Just when it appeared that such features were hard to beat, the car company went and did it again with their 2017 version of the Audi A8. Though not much differs between the 2016 and 2017 models, the slight differences that exist are worth noting. For instance, the 2017 model offers a longer wheelbase, making it a strong contender among full-size sedans. There are also plenty of other features and benefits that make the 2017 Audi A8 a worthwhile choice.

With the 2016 model of the Audi A8, consumers could choose between four different powertrain options. With the 2017 model, Audi decided to narrow those choices down to just two. In this instance, narrowing down consumer options seems like a good choice. The company went ahead and removed their W-12 engine, which was both large and expensive, as well as the turbo diesel V-6. Now, consumers only need to choose between the supercharged V-6, or the more powerful twin-turbocharged V-8. All-in-all, the mileage return on both engines is rather similar.

2. Luxurious Comfort to Sink Into

When it comes to full-size sedans, the 2017 Audi A8 takes a stand as one of the most luxuriously comfortable of any luxury sedan found on the road. The added length of the 2017 model provides more legroom for backseat passengers compared to the 2016 model. In other words, five adults can sit comfortably within the confines of the vehicle without feeling cramped and aching for the next pit stop. The leather material of the seats provides added comfort and style as does the massage feature. A rear seat comfort package allows you to provide massage functions for backseat passengers, which means no more fighting over who calls shotgun.

Audi is known for producing visually appealing vehicles, and the 2017 Audi A8 is no exception. With this car, you have clean, simple lines that give the vehicle a sophisticated appearance. From the Singleframe grille to the aluminum trim found around the exterior of the windows, Audi made sure not to skimp on eye-catching features. If you opt for the 3.0T, you will enjoy LED head and taillights as well as sporty looking bumpers and a sun roof.

If the outside of the Audi A8 is not enough to draw you in, the interior will be. The interior features a gorgeous wood interior trim that complements the leather wrapped shifter. An LED fixture provides ambient lighting to further highlight the features found within the car. Power controlled 18-way seats allow for a wide range of adjustments that best suit you. The luscious interior makes the 2017 Audi A8 one of the most comfortable choices for long road trips.

If you are in search of a car full of safety rich features, the A8 has what you need. It offers the following top-notch safety features:

Unfortunately, the 2017 Audi A8 has not yet undergone evaluation for crash test safety ratings by the National Highway Traffic Safety Administration or by the Institute for Highway Safety. On the plus side, it does come equipped with all of the latest and greatest safety equipment.

6. Fuel Efficiency for the Economically Conscious

Although the 2017 model of the A8 may have had to sacrifice fuel efficiency by only offering two instead of four powertrain options, it still seems have decent stats. The 2017 model boasts an EPA MPG of 19 city and 29 highway, which is more than some of its toughest rivals such as the:

Considering that many consumers look for fuel economy to help them save money, it is a definite benefit to discover that the A8 is not lacking that department.

7. Space to Stretch Your Legs

What the 2017 Audi A8 lacks in comparison to some of its top competitors, it more than makes up for with spaciousness. Aside from the already talked about roomy interior, the A8 also offers rather sizeable trunk space. A wide trunk lid makes loading and unloading the space, which is just over 14-cubic feet, a cinch. Going grocery shopping or packing up for a road trip will not be an issue thanks to the spacious and well thought out design of the A8.

8. More Bang for Your Buck

Although there are certain competitor cars priced lower than the A8, it does offer plenty of value for your dollar, particularly when compared to top rivals like the BMW 7 Series, Porsche Panamera and the Mercedes-Benz S-Class. With a base price of $82,500, the A8 is certainly not the cheapest luxury car on the market, but it is similarly priced to the BMW 7 Series. It is also slightly cheaper than the Panamera and roughly $14,000 cheaper than the S-Class.

9. Driven by Performance and Power

Because the 2-ton 2017 Audi A8 sports an aluminum space frame, it feels both nimble and lightweight on the road. Because of that, it offers some rather superb handling backed by plenty of horsepower. The V-6 offers 366 horsepower with 325 pound-feet of torque. It can reach 60 mph in roughly 5.5 seconds. The twin-turbo V-8 offers 450 hp with 444 pound-feet of torque along with an 8-speed automatic transmission and an all-wheel drive feature.

Considering that it is probably the last of its current generation, Audi when out of its way to ensure that the 2017 Audi A8 had all the latest and greatest technology. From a supreme sound system to night vision, the only thing this car is missing is the ability to drive itself. The Bang & Olufsen stereo system keep you jamming to your favorite tunes while traveling. You can also enjoy WiFi connectivity and Bluetooth pairing.

1. No More Short Wheel Base

Although it is great that the A8 boasts a longer wheelbase, some consumers may find it disappointing that it is their only option. The shorter wheel base is no longer something drivers can choose as the lengthier option is the only one available. The diminished range of options with regard to length and even powertrain availability may be seen by some as a downfall rather than a plus.

Despite the aforementioned technological features, the 2017 Audi A8 does not offer USB connectivity. In a word that is strongly based on digital connection, many drivers look for an even rely on USB connectivity. With USB connections, drivers can charge their devices while on the go. Instead, drivers will have to purchase additional adapters to accommodate their mobile phones, tablets, and other mobile devices.

Although the A8 does sport a Multimedia Interface that is included in all models, you are likely to run into some issues with it. Overall, the menus are intuitive and easy to use. However, scrolling through the menu using rotating knobs proves a bit painstaking at times. There is also a voice command option, but the MMI seems to fall short when responding to natural commands. Another option is to use the touchpad located near the driver’s knee, but again, that seems rather lacking in ease of use.

The A8 has certainly delivered with consistency and excellence over the years, and the 2017 further proves that. However, there are at least a couple of competitor cars that remain favorites among consumers, such as the Mercedes-Benz S-Class and the BMW 7 Series. Of course, the BMW has a more feature-rich approach to it, such as USB connectivity, and the S-Class has more room and even greater style in comparison to the A8.

Still, that does not mean the A8 is not a top contender, particularly for an executive style sedan that offers just about everything you are looking for. In fact, there are plenty of reason why the A8 is better than its rivals, which namely revolves around fuel economy, price, and sleek simplicity. Some of the contenders might appear to over-the-top in terms of style. If you are looking for something simple and stylish, the 2017 Audi A8 is certainly the better choice.

Overall, while the 2017 Audi A8 may have a few pitfalls, the positives outweigh the negatives. As the company’s flagship car, the A8 is worth the purchase, particularly for those Audi fans who are looking to upgrade to a newer model. Consumers will not find themselves disappointed with their choice since the Audi offers power, comfort, style, and safety all in once luxuriously beautiful package.