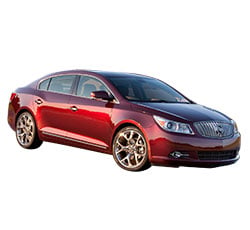 Should You Buy a 2017 Buick Regal? Here Are Some Reasons For and Against

The 2017 Buick Regal excels as a luxurious sedan with sporty aspirations. Enhancing the initial impression of style is an exterior that is sleek and punctuated by a spoiler that improves aerodynamics. Pluses like dual-zone automatic climate control, power-adjustable front seats, and a premium audio system are standard. This model offers plenty of advantages for the discerning buyers in exchange for a few minuses.

To slim down the lineup, the 2017 Buick Regal deletes three trim levels and replaces two exterior colors with Metallic options like Pepperdust and Black Cherry. Additions to the IntelliLink system allow compatibility with a wider range of smartphones.

Available 4G LTE Wi-Fi connects up to seven devices, including tablets, smartphones, and laptops, to the Internet. Everybody can get and stay online at speeds faster than a cellphone even while cruising down the freeway.

The National Highway Transportation Safety Administration gives the 2017 Buick Regal its highest five-star rating. This sedan showed superior performance in surviving frontal barrier and side crashes as well as side barrier hits. Helping with this high rating are such features as stability control, traction control, a rearview camera, and six airbags.

There are just some things that people are better at than machines, so OnStar® allows instant connections with a human agent. The touch of a button contacts somebody for roadside assistance or to provide emergency services. Even when drivers cannot respond during an accident, Automatic Crash Response can automatically dispatch first-responders using GPS.

Drivers can customize the information they need on the eight-inch-diagonal Driver Information Display. Conveniently located right in front of the steering wheel, the screen can contain contacts, fuel, music, warning information, and other data.

When the 2017 Buick Regal goes into reverse, a live video image of what's behind the vehicle appears on the dashboard screen. The Rear Vision Camera even projects guidelines to allow drivers to judge their path and distance to obstacles. Available Rear Cross Traffic Alert relies on radar to monitor backward path for approaching vehicles. When one gets within 65 feet from either side, audio-visual alerts appear.

Setting the available Following Distance Indicator allows drivers to define the distance to maintain between the 2017 Buick Regal and the car in front. If the sedan approaches too quickly and bridges that distance, the available Forward Collision Alert issues audio-visual warnings. This allows a driver enough time to react and prevent an accident.

With available Lane Departure Warning, the 2017 Buick Regal detects a drift out of its lane without an activated turn signal. It then issues alerts to help drivers get back in line.

Buick IntelliLink® is an infotainment system that allows access to such useful apps as Pandora® or SiriusXM Radio®. Familiar tapping and swiping on the 8-inch touchscreen provides control. If the driver want to keep his or her attention on the road, voice recognition allows natural-language commands.

The 2017 Buick Regal accommodates up to five within its four doors. Those in the front get comfort and support, especially for longer journeys. However, those sitting in the rear might feel more confined due to a sloping roofline that impinges on interior comfort. Additionally, the trunk space of 14.2 cubic feet provides less room for groceries and luggage than for almost all the sedan's competitors.

Acceleration with the base 182-hp 2.4-liter inline-four is considered substandard when compared to the higher-lever trims. The 2.0-liter turbocharged version, which appears on all models above the base, boasts better acceleration. However, power delivery with the turbocharger experiences a delay, which disappears once the sedan gets going.

For a midsize, the 2017 Buick Regal doesn't do well in terms of gas mileage, getting only 30 MPG on the highway and 19 MPG for the base engine, compared to the 36 MPG in the Chevrolet Malibu. The turbocharged engine gets even less on the highway at 29 MPG but does better in the city at 21 MPG.

How It Stacks Up to The Competition

Even within the Buick lineup, you could do better with performance using the LaCrosse, which comes with a 300-plus horsepower engine that accelerates swiftly. Handling is also better on the LaCrosse and more comfortable on long-distance drives.
The Chevrolet Malibu has a cheaper base price at $21,680 compared to $27,000 for the Regal. But you get what you pay for with better quality materials in the Regal. The Malibu has more trunk space at 15.8 cubic feet and a wider range of trims and options.
Both the Toyota Camry and the Regal score high for safety from the Insurance Institute for Highway Safety. However, the Toyota gets the highest ratings for reliability and less cramped passenger accommodations in the rear. The Regal allows for Android Auto or Apple CarPlay compatibility, which is not available in the Camry.

The 2017 Buick Regal offers a nice combination of elegance and performance for the price. Its penchant for technology will please commuters who have to stay connected to the office and the Internet even on the highway. And numerous standard and available protective features make it a comfortable choice for safe family transportation.