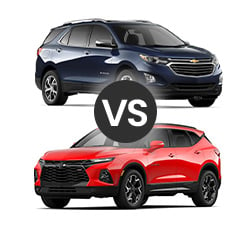 2021 Equinox vs Blazer - How do they stack up? What are the differences?

Chevy is a company that's known for its SUVs. The company builds sturdy, reliable models that many people find convenient and practical. The Equinox and Blazer are two of the two-row SUVs in Chevrolet's current lineup. The Blazer has a long history, and after taking a long break from the market, it has recently made a comeback. The Equinox has been around for awhile, and it has been updated with modern components.

This overview will go over how the Equinox and Blazer differ. Since they're fairly similar in size and style, this detailed information should hopefully be helpful to prospective customers.

By a small margin, the Blazer is the larger of the two models. It has a maximum cargo capacity of 64.2 cubic feet. This is not much more than what the Chevy Equinox offers, which is 63.9 cubic feet. Note that these volumes are calculated when the rear seats have been folded down.

When those rear seats are up, there are still decent-sized cargo areas in the back of these vehicles. The dedicated cargo hold in the Blazer has a volume of 30.5 cubic feet. This is slightly larger than what's found in the Equinox's cargo area, which measures 29.9 cubic feet.

There's really not much of a difference when it comes to leg room. In fact, the second-row passengers in the Equinox have a bit more room than people in the Blazer do. Second-row leg room in the Equinox is 39.9 inches, and it's 39.6 inches in the Blazer. The Blazer does offer more head, shoulder, and hip room, and riders will likely appreciate this, especially if there are three people in the back together.

Up front, people shouldn't have any problem getting comfortable. First-row leg room is 40.9 inches in the Equinox and 41 inches in the Blazer.

In terms of exterior style, the Blazer is the one that has the more modern appearance. This is mostly due to the sharp angles found around its frame. The standard LED daytime running lamps and LED taillamps help in this regard.

With both models, there are many available upgrades to enhance their style and level of quality. They can have panoramic power sunroofs to let in more natural light, hands-free lift gates that can come in handy when someone is loaded down with bags, black or chrome exterior accents to help the vehicles stand out, and roof racks that can be convenient when securing gear to the top of the vehicles. Their side mirrors can come with heating elements, and they can have turn signals integrated into them as well as auto-dimming functions.

Three engines are available with the Chevy Blazer, while only one is offered with the Chevy Equinox. The Equinox runs on a 1.5-liter turbocharged engine. This engine should be sufficient for the average driver, though it's certainly not anything to get too excited about. It can make 170 horsepower and 203 pound-feet of torque. Chevy has matched it with an electronically controlled automatic transmission with six speeds.

The Equinox can come with front-wheel or all-wheel drive. Either way, there would be StabiliTrak, which is a system that makes the right adjustments in order to enhance stability and traction. The towing capacity on an Equinox is 1,500 pounds when all the proper equipment has been installed.

With the Blazer, the first option is a 2.5-liter engine with four cylinders. It's found on the first two trims. Even though it's the most basic engine for the Blazer, it's still more powerful than what the Equinox has. This 2.5-liter engine can generate 193 horsepower and 188 pound-feet of torque. It, too, can tow up to 1,500 pounds.

The higher trims of the Blazer either run on 2.0-liter turbo engines or 3.6-liter V6s. The turbocharged engine has a decent amount of capability, having 227 horsepower and 258 pound-feet of torque. With this amount of power, the SUV will definitely feel more responsive and athletic. Like all the other Blazer engines, it works together with a nine-speed electronically controlled automatic transmission and can have front-wheel or all-wheel drive. It can be used to tow the same amount of cargo as the 2.5-liter version.

Finally, the last choice would be a fairly sizable engine. As a V6 with a displacement of 3.6 liters, it's much stronger than any of the other available engines. It comes with an impressive 308 horsepower and 270 pound-feet of torque. Notably, this engine has a tow rating of 4,500 pounds. If anyone is planning on pushing his/her SUV to the limits and will frequently be towing heavy loads, then this V6 engine is almost a necessity.

Of course, these engines will all have different fuel economies. With the way things are today, many potential customers will be looking closely at these numbers. The Chevy Equinox can earn an estimated 31 miles per gallon on the highway and 26 miles per gallon in the city. With all-wheel drive, those numbers drop to 30 and 25, respectively.

Out of the three Blazer engines, the turbocharged version does the best with conserving fuel. It has an estimated fuel economy of 29/22 (highway/city) miles per gallon. The 2.5-liter and 3.6-liter engines aren't far behind, with respective fuel economies of 27/21 and 27/20 miles per gallon. With each engine, having all-wheel drive leads to using a little more gasoline.

Since the Blazer is the more expensive SUV out of these two Chevys, it makes sense that it has more to offer. It comes standard with an eight-inch touchscreen, along with the Chevrolet Infotainment 3 system interface, Bluetooth, smartphone compatibility, and voice recognition. The Equinox has those same technological features, but it has a seven-inch touchscreen instead of the eight-inch one. With both models, higher trims can have eight-inch touchscreens and integrated navigation. The middle trims are where SiriusXM Satellite Radio starts to be come standard.

For those who love listening to music, podcasts, or anything else, note that these SUVs mostly come with six-speaker sound systems. On higher trims of the Equinox, a Bose sound system with seven speakers is available. With the Blazer, the upgraded system consists of eight Bose speakers. It's available on select trims and is standard on the Blazer Premier.

When comparing the entry-level trims of the Equinox and Blazer, many similarities are apparent. Both models start out with cloth seats and manually adjustable front seats, for example. Keyless open and push-button start are both standard.

In several ways, though, the Blazer feels like the more upscale vehicle. For instance, every one of its trims has dual-zone automatic climate control. In contrast, only the higher trims of the Equinox have this feature. Only the Premier trim of the Equinox has heated front seats, and in comparison, three Blazer trims have heated front seats. The Blazer's top trim even has heating and ventilating in the front row seats, heating units integrated into the second-row outboard seats, and a heated steering wheel that can turn on automatically. These features are only optional on the top trim of the Equinox.

One available feature that's found on the Equinox but not the Blazer is a rear-seat entertainment system. Eight-inch screens can be built into the front-row headrests so that passengers can have a great view. The system comes with two wireless headphones, a remote control, and various inputs, to include HDMI and USB ports.

What's great about modern SUVs like the Equinox and Blazer is that they can be built with driver-assist technologies. This means that they can have their own set of eyes, in a sense. They can monitor what's going on, warn drivers about potential problems, and have the ability to take action, if necessary, to avoid an accident.

The Equinox has automatic emergency braking, pedestrian detection, and frontal collision alert so that its drivers can avoid hitting objects in their path. This model has lane departure warning as well as lane keep assist, which is a corrective steering function that can get the SUV back into the right position.

This is a pretty big contrast with what the Blazer has. Unfortunately, the Blazer doesn't have these same systems in its base trim. Not even its second trim, which is the 1LT, has these components as standard features. It's only at the 2LT level where these are found.

With both models, the mid-level and higher trims have blind spot monitoring, lane change alert, and rear cross traffic monitoring. These can be useful since it's not always easy to see other vehicles on the roads. Instead of having basic rear vision cameras, they can have surround vision cameras, and they can have rear park assist. This program lets drivers know when they're getting too close to other objects when backing up.

In the Equinox and Blazer, there could also be adaptive cruise control. This is an enhanced version of cruise control. It can maintain a set speed, and it can also adjust that speed if the leading vehicle has changed how fast it's going. It's a great program to use on long stretches of highway. Unlike many other companies that have made adaptive cruise control a standard part of the safety suite, Chevy has chosen to make it an option on these models.

There are more available trims of the Blazer than of the Equinox. The Blazer comes in the L, 1LT, 2LT, 3LT, RS, and Premier trims. In contrast, only four Equinox trims are available. They are the L, LS, LT, and Premier. This smaller lineup may be limiting to some customers.

For anyone who likes power and performance, the Blazer makes much more sense. It has three available engines that all have good capability. As a bonus, the Blazer is slightly larger than the Equinox is, and in many ways, it has the nicer cabin.

The Equinox can still be an ideal SUV, though. It has a practical size, many advanced safety systems, a nice-sized touchscreen with smartphone compatibility, and a versatile cabin. Most importantly, it is affordable. Its price is going to make it very attractive to budget-minded consumers.