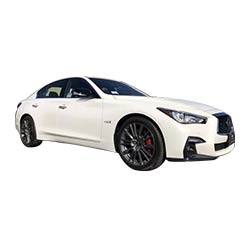 Should You Buy a 2020 Infiniti Q50? Here Are Some Reasons For and Against

The Infiniti Q50 is an impressive luxury sport sedan. Drivers enjoy its seductive exterior styling and long list of standard technologies. Comfortable seats also make the Q50 a great car for traveling. However, there are quite a few strong competitors in this segment. Should you make the new Q50 your top choice?

Although the Q50’s exterior styling remains unchanged, its most important update is on the inside. Infiniti’s dual-touchscreen interface now provides Apple CarPlay and Android Auto mobile support. A new Edition 30 trim was introduced as well. Furthermore, last year’s turbocharged four-cylinder engine has been removed from the lineup.

Infiniti has discontinued the Q50’s turbocharged four-cylinder engine, which developed 208 horsepower. This year, even the base trim receives a twin-turbo V6 engine. Its total output of 300 horsepower allows the Q50 to deliver a more interesting performance. There’s no overlooking the sedan’s stronger kick. When accelerating onto the interstate, expect to hit 60 mph in about 5.1 seconds. With a highway rating of 29 mpg, fuel economy also doesn’t take a dramatic dip.

While most people will have fun driving the lower trim levels, serious performance enthusiasts will want the Red Sport 400 model. Infiniti calibrates its engine to develop 400 horsepower, which translates to even snappy acceleration. Testers have clocked this trim with a low 0-60 mph time of 4.5 seconds. You’ll also benefit from some extra performance goodies. An adjustable suspension allows you to instantly fine-tune the Red Sport 400’s ride and handling.

3. Good Value for a Sports Sedan

Before you go buy a new BMW 3 Series or a Mercedes-Benz C-Class, first go test drive the 2020 Infiniti Q50. It’s noticeably less expensive than its European rivals. Buyers won’t be sacrificing any performance. You can also take advantage of Infiniti’s longer warranty, which covers the powertrain for 70,000 miles. A good amount of standard equipment adds to the Q50’s value. Highlights include an updated touchscreen, automatic collision braking, and LED headlamps.

The Q50’s seductive styling is one of its biggest attributes. In the eyes of many automotive critics, this is among the most dazzling cars in the class. Drivers are drawn to the Q50’s sculpted body. Eye-inspired headlights also help the Q50 to demand attention. For 2020, a new Edition 30 trim has hit the lineup. It boasts an exclusive black-on-white color scheme and special wheels. Meanwhile, painted brake calipers are found on the sport trims.

Expect the 2020 Infiniti Q50 to yet again receive solid crash scores from the IIHS. It also comes standard with some very impressive safety technologies. Infiniti’s forward collision intervention system can predict an accident two vehicles ahead. If you fail to respond to an imminent road hazard, the system will automatically energize your brakes. You can also upgrade to a 360-degree parking camera. Other available safety innovations include turn-adapting headlights, blind-spot intervention, and active lane control.

Over the years, Infiniti’s TwinTouch infotainment system has received a great deal of criticism. Some people complained about the interface’s dated graphics and poor smartphone integration. The updated version is far better. For the first time, drivers can integrate their mobile phone using Apple CarPlay and Android Auto. Travelers will especially appreciate the display’s new map graphics. You can even pull up Google street views. Furthermore, owners have the ability to perform over-the-air updates.

Although the 2020 Infiniti Q50 has a sporty design, it doesn’t force you to sacrifice passenger comfort. Test drivers praise the Q50 for its comfortable seats. While the sport seats hug your body around curves, they also provide outstanding support on long drives. There’s enough legroom to keep taller drivers happy. Meanwhile, an accommodating backseat makes the Q50 a great alternative to a sports coupe. Despite its stiffer suspension, the Q50 offers a satisfying ride quality.

Like so many other people, you probably need to access the web at least a few times a day. However, heavy internet use can drain your phone’s data. An available Wi-Fi hotspot makes the 2020 Infiniti Q50 a more rewarding choice. You can stream music and surf the web at high speeds without needing to leave the car. Because multiple people can link to the Wi-Fi hotspot at once, it’s a feature all of your passengers will love.

The standard 2020 Infiniti Q50 sends power to the rear wheels. If you live an area that doesn’t have harsh winters, you’ll be perfectly fine with the Q50’s rear-wheel-drive system. However, folks who plan to travel in the snow will need Infiniti’s intelligent AWD system. By monitoring factors like wheelspin and throttle, it’s able to promote better traction on slick road surfaces. When enhanced grip isn’t needed, the AWD-equipped Q50 handles just like a classic sports sedan.

The 2020 Infiniti Q50 should have no problem returning a combined 23 mpg. However, while this is good enough for many drivers, others may want to save more money at the pump. For example, Volvo rates the new S60 to return up to 34 mpg. Expect the new Audi A4 to be just as economical.

When driving the new 2020 Infiniti Q50, prepare to experience a fair amount of road noise. Don’t be surprised to hear the tires pattering against the pavement. Although the Q50 is not extremely loud on the inside, some people may still desire less noise. Despite being so comfortable to drive, this car seems to err on the side of sport as opposed to luxury.

3. Could Use More Standard Safety Features

Forward collision intervention is standard on the new Q50. This feature certainly helps make the Q50 a more secure car. However, some of the other cars in this class come standard with even more accident-avoidance features. For instance, the Genesis G70 provides extra safety technologies like blind-spot detection and smart cruise control on every trim.

Most people looking to buy a new sports sedan actually want an automatic transmission. They prefer to allow the car’s computer to do the shifting. On the other hand, there are still some driving purists out there who favor a manual gearbox. The Q50’s paddle shifters don’t compare to a traditional stick-shift transmission.

The Q50’s interior is nice. However, it doesn’t have the refinement of a Mercedes-Benz luxury sedan. Some people have also described the Q50’s cabin’s appearance as being dated. You also don’t have access to cooled seats.

The 2020 Audi A4 is a solid car. It has one of the best interiors in the segment. However, a less powerful base engine with 188 horsepower puts the A4 at a disadvantage. To match the Q50’s level of performance, A4 buyers must spend a lot more money. You may also prefer the Q50’s sleeker exterior design.

There’s no denying the greatness of the 2020 Mercedes-Benz C-Class. It’s elegant and fun to drive. However, there are a few shortcomings to think about. Mercedes-Benz lists the C-Class with a noticeably higher MSRP. A less powerful four-cylinder engine also comes standard on the C-Class.

While the Lexus IS has a reputation for being one of the segment’s most reliable cars, it does not offer as much performance as the 2020 Infiniti Q50. There’s also not as much passenger room in its backseat.

The 2020 Infiniti Q50 remains a good pick for anyone looking to own a new luxury sport sedan. Its ageless exterior styling will look stunning for years to come. With a twin-turbo V6 engine now being standard, every driver can enjoy a very strong output. You also can’t forget about the Q50’s ultra-comfortable seats. While every trim benefits from forward collision intervention, there are some other great safety innovations on the Q50’s list of options.

What are the downsides to the new 2020 Infiniti Q50? For starters, its cabin allows more road noise to enter. While fuel economy is okay, some drivers may demand a more efficient performance.

Save Money on a 2020 Infiniti Q50:
Find New Car Clearance Prices - Many Vehicles are Selling Below Dealer Invoice Prices.

Every dealer offers a secret price. Many prices are below invoice. Find yours here.
2020 Infiniti Buying Guides: