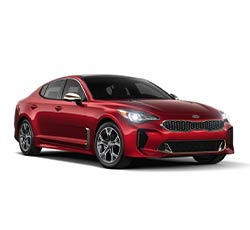 What 2021 Kia Stinger Trim Level Should you Buy? What is the Difference Between Trims?

With the Stinger, Kia has brought a high-quality sports sedan to the market. This car lives up to its unique name; it's sporty and edgy, and it has enough sophistication to appeal to those with refined tastes. Throughout the cabin of the 2021 Kia Stinger, there are numerous high-end features. Most importantly, the Stinger is fun to drive and has two available engines.

Having just been launched in 2018, the Stinger might not be something that everyone is familiar with. Anyone who pays attention to the Stinger, though, will likely be impressed. Kia has made sure to put in all kinds of advanced technology to help the Kia compete with rivals manufactured by luxury brands.

While the Kia Stinger looks athletic and aerodynamic, it still has a good amount of space. It offers 23.3 cubic feet of storage space in the back, 42.6 inches of leg room in the front row, and 36.4 inches of leg room in the second row. Since the Stinger is a hatchback, it's easier to load and unload bulky items into the cargo area. Fans of modern style don't have to worry about whether the car feels clunky at all because the Stinger has more of a sportback shape than a traditional hatchback. Its sloped roof adds to its athletic shape.

Customers can choose from four Stinger trims. This guide will go over how each trim is distinct from the rest, and it should hopefully be useful as people determine which one would best fit their needs and preferences.

Compare the 2021 Kia Stinger GT-Line vs GT Trims. What is the difference?

With its size advantage, the V6 has a lot more power. It can pump out 365 horsepower in comparison to the four-cylinder engine's 255 horsepower. When examining torque, it's a similar story. The GT-Line has 260 pound-feet of torque while the GT has 376 pound-feet of torque. Both engines are paired with eight-speed automatic transmissions, though obviously one engine is a lot quicker off the line than the other.

Besides the larger engine, there are a few other components that make the GT more exciting to drive. It has Brembo brakes, a variable gear ratio rack, and a limited-slip differential. Even if someone isn't an expert in vehicle mechanics, when he/she gets behind the wheel of a GT, the quality of the ride is sure to be noticed.

From the outside, the GT-Line looks pretty similar to the GT. They both have a black chrome front grille and a high gloss back hood trim. Black chrome side mirrors (that have LED turn signals built into them) match the black chrome side vents. Both trims have LEDs in their daytime running lights and rear brake lamps, and their dual chrome exhaust tips are a nice touch that helps the Stinger make a solid first impression.

The GT has a few things that the GT-Line doesn't. For starters, it sits on 19-inch wheels instead of 18-inch versions. It has LED rear turn signals and dual-lens full LED headlights in addition to all of the other LEDs. The GT-Line, on the other hand, has more traditional projector beam headlights. What the GT-Line offers, though, is an optional sunroof with a power sunshade.

From inside the cabin, passengers will be pretty happy with the Stinger's technology package. The car has standard smartphone compatibility, and these two trims have seven-inch touchscreens. In the GT-Line, there's an option to get an eight-inch touchscreen with navigation. Bluetooth and voice recognition are also standard, as are multiple USB charging ports and a wireless charger that can be very convenient to use.

The rest of the interior amenities will give people a treat. A smart key, push-button start, and a two-zone climate system are all standard. The GT is enhanced with LED accent lighting that shows different colors, and it has LED map lighting as well.

Both trims have leather seats, a 12-way power-adjustable driver's seat, and heating elements in the front seats to provide more warmth in the colder months. In the GT, there's also an eight-way power-adjustable seat for the front passenger. More leather is found in the steering wheel and shift handle, and drivers of either trim can opt for heated steering wheels. The GT is a bit more sleek with door sill scuff plates that have an aluminum appearance, and these match the aluminum accent trim. The GT, like the GT-Line, has alloy pedals that contribute to the sporty vibe of the sedan.

Compare the 2021 Kia Stinger GT vs GT1 Trim Levels. What is the difference?

The GT1 has many more driver-assist technologies than the GT has. Safety wasn't previously mentioned in the comparison between the GT-Line and GT. That's because those two trims come with the same exact safety components. They have blind spot monitoring, rear cross-traffic collision warning, and a system that helps people safely change lanes.

An addition to the GT1 is a warning system that can alert drivers to potential forward collisions with cars or pedestrians; if the driver doesn't take action right away, the Stinger can hit the brakes to hopefully prevent an accident or at least make the impact less powerful. The Stinger can also alert a driver when his/her attention needs to be refocused and when he/she needs to stay centered in a lane. The GT1 is equipped with smart cruise control, and this allows the Stinger to independently adjust its speed depending on the speed of the vehicle in front of it. Of course, this can be turned on and off quite easily, just like standard cruise control can be.

In terms of performance, the GT handles in a similar fashion to the GT. However, it does have an electronically controlled suspension that can do an excellent job of smoothing out the ride. Plus, it has something called coasting neutral control. This improves efficiency when the car is coasting.

The GT1 has some more upgrades inside the cabin. Its front seats aren't just heated - they're ventilated, too. The GT1's rearview mirror has a compass built into it and can use HomeLink technology to function as a garage door opener. Some types of lighting and security systems may be compatible with HomeLink as well. Further, the GT1 has sport gauges, a seven-inch display behind the steering wheel where people can find important vehicle information, and a power-adjustable steering wheel. The steering wheel and driver's seat can be programmed to remember favored positions.

In the technology department, the GT1 is notable because it comes standard with navigation and the advanced Harman Kardon sound system. Some consumers are specifically looking for navigation, so this will be an important factor for them.

Compare the 2021 Kia Stinger GT1 vs GT2. What is the difference?

Anyone interested in getting a luxurious car will be more than satisfied with the GT2. The top-of-the-line Stinger has the same mechanisms as the GT1 does, so it's enhancements are all about style, convenience, and sophistication. One thing that will affect driving is the shift-by-wire system. It barely takes the flick of one's wrist to shift gears.

This trim is the only one to have a smart power trunk. In order to open up the trunk, all someone has to do is stand behind it for a few seconds. As long as the smart key is detected in close proximity, the trunk will automatically pop up. This can be useful when someone's hands are full.

The GT2 is also the only trim to have low beam assist. With this feature, the GT2 can adjust the angle of its headlights to better light up the roads as it's turning. The driver doesn't have to worry about anything because adjustments are automatically made based on steering direction and vehicle speed.

As expected, the GT2 has all the fancy high-tech elements seen in the other trims. Navigation, the 15-speaker sound system, and an eight-inch touchscreen are just some of the components in this trim. One thing that the GT2 brings to the table is a head-up display. This display projects information, such as directions or speed, onto the windshield directly within the driver's line of sight. This ensures that the driver won't miss a beat while concentrating on the roads.

In the cabin, the GT2 is decked out with Nappa leather seats. Its drivers seat has thigh extensions, side bolsters, and the ability to move in 16 ways. The front passenger's seat is also advanced, as it can move in 12 ways and has a four-way power lumbar support. Rear-seat passengers aren't left out either, as they (at least those in the outboard positions) get to enjoy heated seats.

After reading all of this information, it's logical to wonder how much the 2021 Kia Stinger costs. It's not cheap by some standards, as the GT-Line starts out at $33,090. Some people may be surprised that a Kia is that expensive, but it's really not if one takes into account all the premium materials used in the cabin and the available engines. If it's put in the same class as luxury sedans, the Stinger is on the cheaper side of the spectrum.

While the GT-Line is exciting and stylish, its biggest disadvantage is its engine. It's the only trim to have the 2.0-liter engine. Most people would agree that it would be great to have 260 horsepower, but it's just not as amazing as having 365 horsepower. For that reason alone, the GT-Line gets knocked out of contention for being the most recommended Stinger trim.

When comparing the GT, GT1, and GT2, there's really not a bad choice. All of these Stinger trims handle exceptionally well, and they all have nice amenities like leather seats, advanced infotainment systems, wireless charging, and LED lighting. If people really want navigation, then they'll need to go with the GT1 trim. Otherwise, the GT would be a pleasure for anyone to drive.

Save Money on a 2021 Kia Stinger:
Are you Shopping for a New Vehicle? Find the Best Deals with "Free - No Hassle" Prices Quotes.