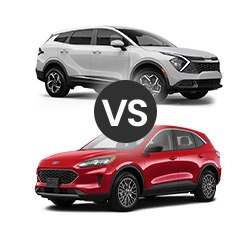 2022 Sportage vs Escape - How Do They Stack Up? Which is Better?

There are so many small SUVs on the market that buyers often do not know where to start their search. These vehicles rose in popularity due to their efficiency combined with their practicality. They work well as commuters for individuals as well as a way to drive the whole family around town.

Ford is a brand with a reputation for creating family-friendly SUVs, and the Escape is one of their more popular models. Kia, on the other hand, is a more recent heavy-hitter in the automotive world, and their Sportage can be credited for a great deal of their success. While there are many similarities between the 2022 Sportage and the 2022 Escape, there are also some differences that will likely sway drivers toward one or the other.

Nearly every trim level of the 2022 Sportage is powered by a 2.4L four-cylinder engine that creates 184-horsepower. Those who desire more acceleration can choose the SX Turbo, which has a 2.0L turbocharged four-cylinder that makes 240-horsepower. Either engine is paired to a six-speaker automatic transmission. Front-wheel drive is standard across the board, but each trim level is also available with an all-wheel drive.

The standard engine for the 2022 Escape is a turbocharged 1.5L three-cylinder, which allows for it to make 181-horsepower. Buyers who choose the Titanium trim level get a hybrid powertrain based on a 2.5L engine. It creates 200-horsepower total. This engine is also available for the SE and the SEL. Optional for the SEL as well as the Titanium is a turbocharged four-cylinder that creates 250-horsepower for more exhilaration at the wheel.

When properly configured, the Kia Sportage can tow up to 2,000 pounds. If buyers need a bit more, the 2022 Ford Escape can tow up to 3,500 pounds when it has the right equipment.

When it comes to the ride and handling, the 2022 Sportage is perfectly acceptable. It will not be described as sporty by any means, but it absorbs the bumps over the road and provides nice steering feedback. The 2022 Escape can be described similarly, although it experiences more body roll than the Sportage.

Considering the low towing number, buyers may hope that the Sportage has a lot of interior cargo space. Unfortunately, that is not the case. There are 30.7 cubic feet behind the second row, and there are just over 60 cubic feet behind the first. These are far lower than some of the other small SUVs currently available.

The Escape is much more spacious. It has 37.5 cubic feet behind the second row, nearly 7 cubic feet more than the Sportage. With the back seats down, the Escape offers 65.4 cubic feet. These numbers are near the top of the class.

All is not lost for the Sportage, however. When comparing the standard infotainment system, the Kia SUV is an obvious choice. It has an 8-inch touchscreen, Android Auto, Apple CarPlay, and a six-speaker sound system. In comparison, the Escape S has only a 4.2-inch display. At the same time, the Escape has a standard Wi-Fi hotspot, while the Sportage does not.

If buyers really want the Escape but need a more advanced infotainment system, they need to only step up to the SE. It is home to an 8-inch touchscreen and adds Android Auto and Apple CarPlay. The Ford SUV also has satellite radio and two rear USB ports. Both of these SUV options can be equipped with a wireless charging pad. The Sportage can upgrade to an eight-speaker sound system from Harman Kardon, while the Escape has an available 10-speaker Bang & Olufsen setup.

When it comes to the quality of the cabins, the Sportage wins once again. It utilizes upscale materials, even in its base model. The 2022 Escape goes with quite a few hard plastics and feels less sophisticated overall. As far as interior space, both the Sportage and Escape have plenty of room in both rows of seating. Giving the Escape a slight edge is the ability of its backseat to slide.

Both the 2022 Kia Sportage and the 2022 Ford Escape received an overall score of five out of five stars from the National Highway Traffic Safety Administration. The Sportage got five stars in its side crash testing but only four stars for rollover and frontal collisions. For the Escape, the score was five stars for both side crashes and frontal collisions. The Escape received four stars in rollover testing, which is common for SUVs.

Blind-spot monitoring becomes standard for the Sportage Nightfall Edition, which is just above the entry-level LX. The EX trim level can add adaptive cruise control and parking sensors by equipping the EX Technology package. Meanwhile, the Escape adds parking sensors on its SEL trim level. Select models can also have the Co-Pilot 360+ package, which includes evasive steering assist, navigation, and adaptive cruise control.

Many factors should be considered when calculating the value of each of these SUVs. The 2022 Sportage can be had for a lower price tag, with the entry-level model starting at $24,090. For the Escape, the starting price is $25,555, which is closer to the average for this vehicle class. The top-of-the-line Sportage starts at $33,750, while the top Escape will cost around $35,490. It costs $1,500 to upgrade to an all-wheel-drive in either SUV.

At first glance, the Sportage is the better deal. It comes with far more standard technology features and has a nicer cabin, all at a lower starting price than the Escape. On the other hand, the Escape has more safety features, can tow more, and has a more spacious cargo area, which may justify its additional cost.

Another thing to keep in mind when choosing between these two options is the "true cost to own." For example, how much will each of these vehicles cost over the course of five years if they are driven 15,000 miles each year? The following information pertains to the entry-level versions of the 2022 Sportage and the 2022 Escape.

Depreciation is a large factor in the true cost to own. The Sportage LX is estimated to lose around $9,600 over the first five years, while the Escape S will lose around $11,350. On the other hand, the Sportage will accumulate around $12,300 in fuel costs, while the three-cylinder Escape will only cost around $10,650.

Both the 2022 Kia Sportage and the 2022 Ford Escape are considered excellent options in the small SUV world. They both are spacious and have multiple advanced driver assistance features. Buyers can also choose from different powertrains when considering either of these options.

Things that give the Sportage an edge include the starting price and the number of standard technology features. It also will lose less value in five years, which will come in handy for anyone who changes vehicles frequently. The Sportage also has a well-built cabin that is comfortable for even long journeys.

At the same time, the Escape has a larger cargo capacity and much more impressive towing figures. It also has important driver aids, such as blind-spot monitoring, on its standard feature list. These factors make the Escape a good choice for adventurous families that plan on taking frequent road trips. That is especially true if they choose the hybrid or three-cylinder engine option, which will save them money at the pumps.

Ultimately, either the 2022 Kia Sportage or the 2022 Ford Escape can be considered a smart buy. Those who need fuel efficiency and cargo space will want to choose the Escape, while those who want a sophisticated cabin and a vehicle with a longer warranty should choose the Sportage.