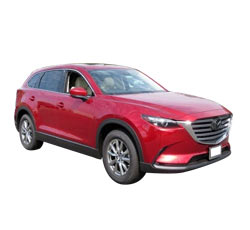 What 2019 Mazda CX-9 Trim Level Should you Buy? What is the Difference Between Trims?

Finding an affordable and spacious third-row seater is easier said than done these days. Although a lot of automakers have realized that growing families want the extra space without delving into mini-van territory, it seems like some manufacturers are struggling to make their third-row SUVs very accommodating. The 2019 Mazda CX-9 is sort of a mixed bag in this regard. While the third row and cargo area are not the most spacious in their class, they also are not the most cramped. Also, Mazda seems to be paying attention to consumers' demands for better technology by including more features, such as smarpthone app integration via Apple CarPlay and Android Auto.

This model year, Mazda gives its customers four solid choices of trim levels on the CX-9. Each one has been rated and regarded well in the past by consumers and auto gurus alike. Many customers love the power (250 hp and 310 lb-ft of torque, to be more precise) that they get from the standard 2.5T engine. But which trim level is the one that will best fit your needs? Is it the base Sport trim with its bountiful list of standard driver aids? Or is it the line-topping Signature trim, which comes with standard all-wheel drive? Or could the Touring or Grand Touring provide the best overall deal?

Compare the 2019 Mazda CX-9 Sport vs Touring Trim Levels. What is the difference?

The Sport comes with standard LED lights on the exterior, meaning that headlights, taillights, and daytime running lights are all LED. There is black body molding and a black grille up front, and a body-colored roof spoiler is built onto the rear. Also, the side mirrors are body-colored and feature integrated turn signals, something that generally does not come standard on base trims. A dual exhaust and rear privacy glass also adorn the body of the Sport, which rides atop 18-inch aluminum-alloy wheels. The Touring also equips LED lights, but it adds high beam control to the mix. Also, the Touring includes rain-sensing windshield wipers and heating for the side mirrors.

On the inside, both trim levels are also well-equipped. The Sport's cabin is temperature-controlled by a tri-zone automatic climate control system that comes complete with a pollen filtration device. Doors and windows are powered, and the doors have a speed-sensing automatic locking mechanism. "Answer back" comes with the remote keyless entry system, and push button start is standard. There are two 12-volt power outlets (one in the front, one in the cargo area), rear window defog, and illuminated front door pockets. The Touring equips all of this and adds courtesy lights to the front doors, a power lift-gate, a frame-less automatically-dimming rear-view mirror with the built-in HomeLink garage door transceiver. Mazda Advanced Keyless Entry and Start and Mazda Radar Cruise Control with a Stop and Go function also come standard on the Touring.

Otherwise, the interiors of the Sport and Touring look fairly similar. Both have designs that allow for seating seven passengers. The biggest design difference, however, comes in terms of upholstery. While the Sport has some nice cloth, the Touring equips some seriously chic leather upholstery in addition to the standard leather-wrapping found on the steering wheel and shift knob.

Again, both vehicles are well-equipped when it comes to standard safety features. In fact, the base Sport puts some other mid-level trims by other manufacturers to shame. The Sport is equipped with Trailer Stability Assist, a rear-view camera, a blind-spot monitoring system complete with a rear cross traffic alert, Smart City Brake Support, an engine-immobilizing anti-theft system, and a tire pressure monitoring system. The Touring, however, ups the ante by adding Lane Keep Assist, a lane departure warning, and Advanced Smart City Brake Support with a pedestrian detection feature.

Both trim levels have a few packages and stand-alone options. On the Sport, you can get the Power Driver's Seat and Heated Side Mirror package and two additional color options (Machine Gray Metallic Paint and Snowflake White Pearl Mica Paint). The Touring adds the option for Soul Red Crystal Metallic Paint and the Touring Premium Package (which includes a 12-speaker Bose sound system).

Compare the 2019 CX-9 Touring vs Grand Touring Trims. What is the difference?

Taking it up another notch, the Grand Touring takes everything that you will love about the Touring and adds quite a bit more. On the exterior, the Grand Touring features the full display of LED lights (including fog lights), an adaptive front lighting system, de-icer for the windshield wipers, automatic folding power side mirrors, and chrome body moldings. There are also aluminum roof rails that have been finished in beautiful satin chrome. Additionally, the wheels are larger, coming in at 20 inches.

Inside of the cabin, a lot of the standard features still hold strong, such as tri-zone automatic climate control, a tilt-and-telescopic steering wheel, and the remote fuel door release. The Grand Touring does add some extra creature comforts in the form of retractable sun shades for the rear windows and aluminum trim. The front seats are both heated and ventilated. The 12-speaker Bose sound system that is optional in the Touring is standard issue for the Grand Touring, and you also get upgrades that include SiriusXM Satellite Radio services.

For the most part, safety features remain the same. However, the Grand Touring receives a standard 360-degree surround-view monitor in addition to the rear-view camera. Also, parking sensors for the front and rear come equipped.

Regarding packages, there aren't any for the Grand Touring since it is so highly inclusive as it is. However, you are still left with options for painting the vehicle Machine Gray Metallic, Soul Red Crystal Metallic, or Snowflake White Pearl Mica.

Compare the CX-9 Grand Touring vs Signature Trim Levels. What is the difference?

At last, we have reached the pinnacle of the 2019 Mazda CX-9 line-up. The Signature trim is, without a doubt, the most feature-packed trim level of the bunch, even though it really isn't a huge step up from the already-luxurious Grand Touring. However, there are some differences between them that are worthy of note.

On the outside, the Signature has a Signature badge that differentiates it from the Grand Touring, but not much else. The interior is a bit of a different story. The Signature's cabin has LED accent lighting for the door pulls, door and window lock mechanisms, shifter area, and door pockets. It also features gorgeous Genuine Santos Rosewood inlays around the door switch-gear and shifter surround. The second row of seats receives heating, and the leather upholstery is upgraded to Nappa leather. The infotainment system gains standard navigation features in the Signature trim but otherwise remains fairly similar to that found in the Grand Touring. The same can be said for the list of standard safety features.

On a side-note, the only options difference is that you lose the ability to opt for the Soul Red Crystal Metallic body paint.

The 2019 Mazda CX-9 continues the CX-9's trend of being a well-loved third-row SUV. Each trim level packs a lot into its list of standard features, making even the base Sport trim a smart buy for most people.

Of course, if you want the best deal, the Touring incorporates a lot of great features into an affordable package. It does not have as many luxury items and creature comforts as the two higher trim levels, but it still feels like a high-end vehicle.

Still, if you can swing it, some of the upgrades on the Grand Touring make it feel more high-brow without destroying your bank account.