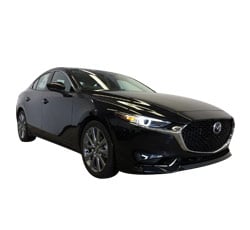 What 2019 Mazda3 Trim Level Should you Buy? What is the Difference Between Trims?

First unveiled at the 2018 Los Angeles auto show, the 2019 Mazda 3 has made a huge splash with auto enthusiasts and everyday drivers alike. The previous generation, which was introduced in 2013, was nothing short of stunning, but the new Mazda 3 kicks it up a notch or two.

The new Mazda 3 leaps into the future with a new spin on the automaker's "Kodo design language", which stems from the 2017 Vision Coupe Concept. This uniquely Japanese spin on automobile design lends to the high-tech, innovative nature of the Mazda 3. For all the tech-savvy drivers out there, this vehicle might be difficult to pass up. But is every trim level really able to live up to the hype?

Mazda keeps the 3's line-up simple this model year, giving customers just three trim levels to select from. You also have two body styles to select from: the 4-door sedan and the 5-door hatchback. Also, you now have the choice of getting all-wheel drive or sticking with the standard front-wheel drive system. This is a huge change for Mazda, as the 3 has never given drivers this option in the past.

So, which trim level is the right one for you? Is it the base Sport trim, the mid-level Touring, or the line-topping Grand Touring? Let us take a closer look at each of these trim levels, how they contrast, and which one has the features that will best suit your needs.

Compare the 2019 Mazda3 Sport vs Touring Trim Levels. What is the difference?

At the beginning of the 2019 Mazda 3 line-up is the Sport trim. The Sport receives its power from a 2.0-L 4-cylinder engine that is able to generate 155 hp and 150 lb-ft of torque. If you do not wish to drive on the standard 6-speed manual transmission, there is an optional 6-speed automatic transmission available. The manual transmission comes standard on all three trim levels, but the Touring and Grand Touring trim levels both get an upgraded 2.5-L engine that musters up 184 hp and 185 lb-ft of torque.

The differences between the Sport and the Touring are somewhat subtle, although they will be apparent to the discerning eyes of some Mazda fans. The Sport rides atop 16-inch wheels, whereas the Touring is crafted with larger 18-inch steel wheels. The side mirrors on both trim levels are body-colored and folding, but those on the Touring get integrated turn signals and are heated. Power door locks and power windows come standard on each trim level, as do push button start and a remote keyless entry system with an "answer back" feature. A bright trim beltline on the Touring helps to set it apart from the Sport, as does the addition of a body-colored rear decklid spoiler.

In terms of power, this is where the Grand Touring really sets itself apart. The Sport is powered by a standard 2.0-L DOHC 16-valve 4-cylinder engine whereas the Touring gets a stronger 2.5-L engine. Whereas the Sport's engine is able to generate 155 hp, the Touring can get 184 hp, giving it more ample acceleration speeds. To get a 4-door sedan or 5-door hatchback up and running, the 2.5-L engine is the better bet here.

On the inside, the differences become much more noticeable. In particular, the Touring's leatherette upholstery sets itself apart from the cloth-trimmed sport seats on the Sport. The leatherette gives the vehicle a more upscale vibe, as do the leather-wrapped steering wheel and gearshift knob. The driver's seat on the Touring gains 6-way power adjustability with manual lumbar adjustment. Also, the cabin of the Touring can be heated and cooled by an upgraded dual-zone climate control system. In the rear of the Touring, the center armrest provides cupholders for passengers.

Both trim levels come fairly well-stocked with helpful safety features. A rearview camera comes standard on the Sport trim, as does the E911 automatic emergency notification system, the tire pressure monitoring system, and Smart City Brake Support. Of course, the Touring amps it up in terms of safety features by adding an advanced blind spot monitoring system with a rear cross traffic alert. This lets the driver know if another vehicle or object is lingering in one of the vehicle's blind spots.

The 2019 Mazda 3 is also full of engaging infotainment features. Standard infotainment features on the base Sport trim come in the form of the Mazda Connect infotainment system. This system is loaded with voice command, internet radio integration (with Aha, Pandora, and Stitcher), HD radio, SMS text message audio delivery and reply, and the Radio Broadcast Data System program information. Additionally, the Sport has a 6-speaker AM/FM sound system, Bluetooth connectivity, two USB audio inputs, an auxiliary jack, cruise control, and buttons for cruise control and audio mounted onto the steering wheel. The Touring trim is essentially equipped the same way in terms of infotainment features. To get some serious upgrades, you will have to go with the line-topping Grand Touring trim level.

Compare the 2019 Mazda3 Touring vs Grand Touring Trims. What is the difference?

The 2019 Mazda 3 Grand Touring gives you the feeling of luxury for well below the price you would pay for even an entry-level luxury vehicle. It shares many of the same mechanics and features as the Touring trim. However, it is certainly more powerful and loaded with even more safety and infotainment features for all occupants of the vehicle to enjoy.

Of course, you can expect safety features to be top-notch on the Grand Touring. You can choose to equip a Premium Equipment package on the Grand Touring, which gives you the additional benefit of having a built-in navigation system. Additionally, this package contains a heated steering wheel, adaptive headlights, high beams that are automatic, and paddle shifters on the 6-speed automatic transmission variant. As far as driver aids go, the package includes all of the necessities: adaptive cruise control, lane departure intervention and warning, high-speed forward collision warning and avoidance, and a feature that can read traffic signs.

The standard 6-speaker audio system that comes on the two lower trim levels gets swapped out for a vastly improved, high-tech 9-speaker Bose sound system with AudioPilot 2 and Centerpoint 2. Also, a 4-month trial subscription to SiriusXM Radio comes as a complementary incentive on the Grand Touring. Also, it should be noted that, unlike the previous Mazda 3 model years, smartphone app integration via Android Auto and Apple CarPlay will be available across the 2019 line-up. This means that you do not have to upgrade to the Grand Touring to use navigation; you can simply access it through the app on your smartphone.

Choosing a trim level on the 2019 Mazda 3 is relatively straightforward, at least compared to other vehicles in its class. While you are not given a ton of options for customization, this can be a good thing for anyone who wants to avoid a ton of unnecessary frills. That is not to say that the Mazda 3 is cheap or low-tech. In fact, it seems that Mazda is bent on launching into the future with its design on this year's 3 line-up.

For the price, the Grand Touring trim is kind of a steal. It includes a lot of standard safety and infotainment features and also ups the ante in terms of comfort and convenience. With a strong engine powering it, the Grand Touring has the most overall appeal. Its performance is spunky enough, the interior feels rather luxurious, and the upgraded Bose sound system is worth the extra cost. Skip the two lower trim levels if you can and go right to the top of the line.

Save Money on a 2019 Mazda Mazda3:
Are you Shopping for a New Vehicle? Find the Best Deals with "Free - No Hassle" Prices Quotes.