2017 Mercedes Benz GLS Class Pros vs Cons. Should You Buy? 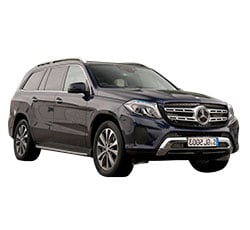 Should You Buy a 2017 Mercedes Benz GLS Class? Here Are Some Reasons For and Against

The 2017 model year is the first year for the GLS Class SUV. The SUV is a replacement for the full-size luxury SUV, GL Class, which was a popular luxury SUV for over a decade. Overall, there are a lot of similarities between the GLS and GL models, but the GLS has received a facelift, a new standard transmission that comes with nine speeds, and a variety of new tech features.

One of the main features of the new 2017 Mercedes Benz GLS Class is that it has a nine-speed transmission. While eight-speed transmissions have been the norm for luxury SUVs for years, the ninth speed provides drivers with a much smoother ride when accelerating and also helps to improve acceleration speed.

Similar to many other vehicles produced by Mercedes Benz, the 2017 Mercedes Benz GLS Class has some of the top interior features available. The GLS Class has standard luxurious leather upholstery, a 22 inch steering wheel, ventilated and heated seats, and several different controls to set different climates throughout the SUV.

Drivers of the GLS Class will also receive a wide array of tech features included for free. The SUV comes standard with a new instrument panel, which includes an infotainment system and an 8-inch display. Drivers can also use the SUV to connect to their smart phone, which allows several applications and GPS options to be displayed on the screen.

Those that like to listen to music while driving will enjoy the top-of-the line audio system. The 2017 Mercedes Benz GLS Class comes standard with 16 Bose speakers and HD radio. Drivers can also listen to music throughout the standard CD player or connect a device to one of several USB inputs.

Many drivers of large luxury SUVs also want to have the ability to tow trailers and other heavy items. With the GLS Class this will not be a problem. The GLS class has the ability to tow up to 7,500 pounds. This is an upgraded to several of the competing SUVs that have towing capacity of less than 7,000 pounds.

The 2017 Mercedes Benz GLS Class has one of the best safety ratings available to large SUVs. The GLS Class now comes standard with a wide array of safety upgrades and features, which often are only available as upgrades for larger SUVs. These include blind spot monitoring, lane departure warning and assistance, and emergency braking.

Drivers and passengers of the GLS Class have routinely commented that it has one of the quietest cabins available. The GLS Class has a quieter engine to begin with, but has also installed a variety of sound proofing barriers, which help to make the drive quieter and more relaxing.

Drivers of the 2017 Mercedes Benz GLS Class will also enjoy the ample amount of space there is for all passengers. The GLS Class comfortably can sit seven passengers and those that are in the third row will find that there is ample legroom for them as well.

Drivers of the 2017 Mercedes Benz GLS Class will also enjoy the customization options that they have when driving. Each driver of the SUV will be able to design a profile that will automatically set the SUV to certain preferences, which can include seat and wheel location, mirror placements, and even radio volume.

One complaint that some drivers have had with the SUV is that it does not provide the acceleration necessary when coupled with its base engine. The V6 diesel has 255 horsepower, but the acceleration at times seems insufficient to pass other vehicles on the highway.

Cargo space in the 2017 Mercedes Benz GLS Class also seems to be lacking compared to other SUVs. When all three rows are up, there is less than 20 cubic feet available. Since this is due to more legroom in the back row, the cargo space is more comparable to other SUVs in its class when the second and third rows are down.

Drivers that are considering the 2017 Mercedes Benz GLS Class will also consider the Lincoln Navigator, Cadillac Escalade, and Range Rover. Overall, the GLS Class favors positively when it is upgraded to the higher engine options. The luxury and tech finishes are what one would expect at this point price. However, the base engine option does not provide the power most would want.

In conclusion, the 2017 Mercedes Benz GLS Class will be a very popular choice with consumers due to the excitement of the new model type. Drivers will like the SUV for its luxury, tech, and safety features. Most will end up upgrading to the higher trim levels so the diesel engine issues may not be a concern.