2017 Mercedes Benz C Class Pros vs Cons. Should You Buy? 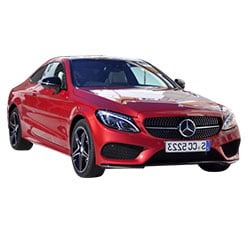 Should You Buy a 2017 Mercedes Benz C Class? Here Are Some Pros vs Cons

The Mercedes-Benz C-Class started out as the German automaker's entry-level model; but, thanks to constant revisions it is now slotted above the CLA-Class, and just a short step behind the E-Class. The 2017 Mercedes-Benz C-Class leaves almost nothing to be desired. It delivers on styling, comfort, performance, and most other aspects that one would expect from a luxury car of its stature.

For 2017, the C-Class adds fully redesigned coupes and convertibles to its lineup. However, the sedan continues almost unchanged since its last revamp in 2015. Mercedes-Benz also introduces the AMG C43 with a new nine-speed automatic transmission to replace the AMG C450. The sedan gets the rearview camera as standard equipment and customers can choose between two new exterior paints: Brilliant Blue Metallic and Selenite Gray Metallic.

The 'C' in C-Class seems to stand for 'Choices.' The 2017 Mercedes-Benz C-Class is available in three body styles: the sedan, the coupe, and the convertible. These three options are further offered in five flavors:

The C350e, a plug-in hybrid, is set to hit the market anytime soon. The C300 also offers two sub-trims - Luxury and Sport. Of course, creature comfort and under-the-hood aggressiveness increases as one moves up the trim levels, and so does cost.

The new-for-2017 Mercedes-Benz C-Class convertible and coupe share some of the sedan's best traits, but very lightly. They come with a similar front clip and a recognizable grille, but that is as far as the similarity goes. The coupe and convertible are characterized by sharper, bolder lines, a relatively upright windshield, wrap-around headlights, S-Class coupe-like taillights, and a softly sloping roofline. The transformations are even more dramatic in the AMG trims. For starters, they are wider by 2.5 inches and 2.6 inches up front and in the rear respectively. The whopper from Affalterbach also features new, aggressive-looking front and rear fenders, perhaps to scare away the model's more timid competition.

The new C-Class interior boasts of being the first to be developed in Daimler's Italian design studio. The cabin is both futuristic and traditional blending modern tech aspects with Mercedes-Benz's evocative classic design. As is customary of the German automaker, material and build qualities are excellent. Even the standard MB-Tex simulated leather upholstery is impressive when in the C-Class. Perhaps as a show of superior craftsmanship, Mercedes-Benz has very artfully cut and curved the center stack out of a single wood veneer sheet. It is also pleasant that the new C-Class' dashboard layout is clutter-free, with a simple rotary dial and a touchpad that responds to swipes, gestural inputs, and handwriting.

2017 Mercedes-Benz C-Class' front seats provide excellent lumbar support and a wide range of adjustments in all trim levels. The sedan offers adequate rear headroom and legroom; although, expectedly, the coupe and the convertible offer a little less of both. The C-Class coupe offers up to 10.5 cubic feet of trunk space, which is a competitive amount for its segment. The trunk space can also be increased by folding the back seat. Drivers can also include the optional Air Balance Package that infuses perfume into the AC system.

Mercedes-Benz claims that the C300 sedan and coupe will make a 6.3-seconds dash to 60 mph. The AMG C43 employs a new nine-speed automatic transmission to rush from naught to 60 mph in 4.6 seconds while the C63 reaches the same speed in only 4.0 seconds. The C63 S reduces a second to sprint from zero to 60 mph in 3.9 seconds. The two top trims are fitted with a multi-clutch, seven-speed automatic transmission. Convertibles, regardless of trim, are uniformly a tenth of a second slower.

The Mercedes-Benz C-Class provides a calm and composed ride over uneven terrain. It is rarely uncomfortable even in Sport+ mode+ and unbelievably serene in Comfort mode. The C-Class' Airmatic suspension defines the term "like floating on air." This suspension cushions the ride and makes it a rare pleasure to drive on run-flat tires. There are four drive mode settings: Comfort, ECO, Sport, and Sport+.

The IIHS gave the C-Class sedan a top score of Good in all crash-test categories. The institute also gave it a top superior rating for its frontal crash mitigation system. All models are fitted with an extensive list of standard safety equipment including antilock brakes, a 360-degrees airbag system, and a drowsy driver monitor, among others.

Equipment is in plenty in the 2017 Mercedes-Benz C-Class. Even the base trim receives keyless entry, a touch-pad-operated multimedia interface, and dual-zone climate control. The convertible gets a power-retractable soft top, heated front seats, and AIRSCARF. Features such as Bluetooth audio streaming and ECO start/stop are standard on upper trims.

The optional features are now placed in four premium packages to ease the ordering process. Some packages are standard on higher trims but optional on lower trims. They also differ slightly between the two-door and four-door versions.

Although all controls and dials are easily accessible to the driver, some are awkwardly positioned. For example, the touchpad infotainment interface looks out of place on top of the dashboard.

With prices starting at above $40,000, the 2017 Mercedes-Benz C-Class is much costlier than its competitors. However, it comes with your money's worth of equipment.

The base C300 is not quite as powerful as entry-level cars from competitors such Audi, BMW, and Cadillac. However, higher C-Class trims are almost unparalleled performance-wise.

All in all, very few of the latest C-Class' rivals offer noteworthy competition. While competitors such as the BMW 4 Series Coupe and the 3 Series sedan lean more on the sporty side, the C-Class provides an excellent balance between its sporty and luxurious side. The 2017 Mercedes-Benz C-Class is also better-rounded than the redesigned 2017 Audi A4 sedan and offers a more upscale interior than the new Cadillac ATS.

Why the people at Daimler are putting so much emphasis on the C-Class is still a mystery, although no one is complaining. The new generation of the C-Class was aimed at combating the model's competition; however, the 2017 model seems to have been built with elimination in mind. It is undoubtedly in the top three tier of its segment.