2021 Nissan Armada Pros vs Cons. Should You Buy? 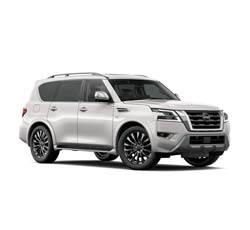 Should You Buy a 2021 Nissan Armada? Here Are Some Reasons For and Against

As a full-size SUV with plenty of capability and three rows of seats, the 2021 Nissan Armada has everything that some people might want in their next vehicles. The Armada is worthy of a lot of attention, since it's strong and athletic while being practical and packed with modern technology.

Nissan has taken a slightly different approach to the design of the Armada for the 2021 model year. The front end is a bit more square than it was in the past, and the headlights, rear bumper, and taillights have all been upgraded. A new trim - the Midnight Edition - is available for anyone who likes the look of a blacked-out vehicle. The Midnight Edition looks aggressive and edgy.

Inside the cabin, there have been some additions. There's now a 12.3-inch touchscreen and a seven-inch information display in every trim. In addition, a number of advanced safety systems have become standard in this Nissan. Also, due to a tweak in design, the V8 that powers the Nissan is now a little more powerful than it used to be.

Under the hood of a 2021 Nissan Armada, there's a 5.6-liter V8 engine. It gives the SUV 400 horsepower and 413 pound-feet of torque, so there's definitely no shortage of power. When carrying a full load of passengers or towing cargo, people will be able to drive confidently.

Both rear-wheel and four-wheel drive are available, with the 4WD models coming with a two-speed transfer case.

The Nissan Armada sits high off the ground, with a ground clearance of over nine inches. This gives it the ability to clear many kinds of obstacles. Driving on snowy roads, bumpy terrain, or rocky paths shouldn't be a problem in most cases. Also, a lot of people prefer to have this type of height because it gives the an unobstructed view of the road ahead. When sitting behind the wheel, having a high perch can be useful.

Having three rows of seating can be an advantage. The Armada has a very spacious second row that has 41 inches of leg room. In the third row, things aren't as roomy, but there's still over 28 inches of leg room. Three people can sit in the back row, and in the middle row, there could either be a bench seat or a pair of captain's chairs.

It's very simple to rearrange the seating in order to accommodate cargo instead of passengers. With either the push of a button or the pull of a lever, the rear seats can all fold down. The resulting cargo capacity is extremely generous.

4. Ready for a Trailer

Whether people need to tow cargo for work or fun, it's important that they drive vehicles that they can count on. The 2021 Nissan Armada comes with a towing capacity of 8,500 pounds, so it can be used in many kinds of situations. The Armada is far from what one would consider a lightweight. Trailer Sway Control and a Trailer Brake Controller can both enhance safety when something is hooked up to the vehicle.

Every Nissan Armada comes with refined features, such as heated front seats, power lumbar support in the front seat, and a leather-wrapped steering wheel. Instead of starting out the trims with cloth, Nissan gave its base model leatherette upholstery. All of the other trims have leather seats, with the top-level trim being upgraded with quilted leather. Beyond this, the Armada can have ventilated front seats, heated rear seats, and a heated steering wheel. This rivals what many luxury vehicles showcase in their cabins.

These days, many models do offer navigation, but usually it's only an available feature. What's really impressive is that Nissan has made navigation a standard part of every Armada's infotainment package. Navigation can be helpful when trying to find new locations and avoid getting stuck in traffic. Using the vehicle's system can be safer than using a navigation program on a phone, since it saves people from having to look down at the small screens on their phones.

In addition to navigation, every Armada gets to have a 12.3-inch touchscreen. It can be so nice to have such a large screen, as it makes it easier to read and interact with. Android Auto and wireless Apple CarPlay are both standard, and so is SiriusXM. People who love staying connected to the network will be happy to hear that every Armada is set up to act as a Wi-Fi hotspot. Multiple devices are supported through this Wi-Fi network.

Customers with kids may know that it can sometimes be hard to keep everyone entertained on long trips. That's why it's great that Nissan offers a tri-zone entertainment system. It gives the SUV an additional pair of monitors that measure eight inches, and the system comes with a remote control and wireless headphones.

9. Has Its Own Pair of Eyes

This SUV can watch out for potential problems on its own. Because it has various monitors and sensors placed around it, the Armada knows when it's about to hit an object or veer out of a lane. If this type of situation arises, the vehicle can warn the driver and prompt him/her to take corrective measures. If a driver is unable to react for whatever reason, the Armada could correct steering or slow itself down. A bonus is that the Nissan's forward collision system can sense the presence of not only vehicles, but also pedestrians.

Blind spot monitoring and rear cross-traffic alert are both standard, as are sonar systems that can help with parking. Many trims have camera systems that give them a 360-degree perspective.

As a premium SUV, the Nissan Armada makes its presence known. It has LED headlights and LED Daytime Running Lights, with LED fog lights being an option. The side mirrors on the vehicle are heated and have LED turn signals built into them, and some of the trims have side mirrors with puddle lights and an auto-dimming function. All of the trims, with the exception of the base model, have a power liftgate and moonroof. These two components are highly sought after by many customers.

Reasons Not to Buy a 2021 Nissan Armada – The Cons

It's not uncommon to see full-size SUVs offered with only one engine. Still, it should be noted that there is no alternative to the V8. There's no supercharged version, for example, nor is there a larger V8 for people who really value performance.

The Nissan Armada is not the SUV to pick if anyone is especially considered about gas consumption. In the city, his SUV can only travel about 14 miles with a single gallon of gas. Highway numbers are better, but not by that much. With all-wheel drive, the fuel efficiency drops by about one mile per gallon. Anyone who does purchase the Armada should be expecting to spend a lot of money on gas each month.

3. May Not Have the Best Looks

The appearance of the Nissan Armada may not appeal to some buyers. The Armada is tall and wide, and it may be too boxy for some people. These consumers may instead turn to vehicles that have softer corners and a more aerodynamic shape.

4. The Price May Not Be Right

A starting price of over $52,000 may turn some people away from this Nissan model. Compared with some other SUVs and minivans, the Armada could be viewed as too expensive. It does come with many features, but some people just won't have the budgets to accommodate this kind of purchase.

The Suburban is an iconic SUV that has been popular for a long time. It matches up well with the Armada, though it's the more expensive out of the two models. Because it's longer the the Armada, it may be more difficult to maneuver. With full-size SUVs, there comes a point when the vehicles just get too big. Some may lean more towards the Armada than the Suburban because of this reason.

As another three-row SUV, the Honda Pilot may compete for attention with the Nissan Armada. While it's significantly cheaper than the Nissan, the Honda just doesn't compare in terms of quality. It falls well short of the mark that the Armada sets with horsepower; some might consider it to be a different class of vehicle for this reason.

Plus, it doesn't have all of the upscale amenities that the Armada has, like standard heated seats and standard navigation. The base model of the Pilot doesn't even come with Apple CarPlay or Android Auto.

The 2021 Nissan Armada is an attractive vehicle for several reasons. It has a striking appearance that matches its capability; there's no question that this SUV would be up for a challenge with its 400-horsepower engine. To please customers, Nissan has put in many upscale features in its cabin, and they include advanced technology and refined seating materials. The safety package is equally impressive, and it can be so reassuring to know that one's vehicle is being proactive about keeping passengers out of harm's way. If people have the opportunity to get an Armada, it may be something that they want to take advantage of.


Save Money on a 2021 Nissan Armada:
Are you Shopping for a New Vehicle? Find the Best Deals with "Free - No Hassle" Prices Quotes.