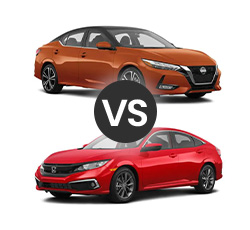 Affordable sedans are always going to be popular. The Nissan Sentra and Honda Civic are two well-known compact cars. The 2021 versions of these cars look sporty and athletic, and they've been built with a lot of advanced technology. It's pretty impressive what a top-of-the-line Civic and Sentra can be equipped with, but even if someone sticks with an entry-level trim, there will be plenty of advantages.

It can be hard to choose between such evenly matched cars like the Sentra and Civic. This overview will compare how the two cars do in several categories. After reading this comparison, a potential customer should hopefully be able to decide which model might suit them better.

(Before jumping into the details, here's a quick note that there are actually many kinds of Civics. There are coupe and hatchback versions of the Civic, and they're going to be similar to the sedan but will have different dimensions. There's also the Civic Type R. This is a racing-inspired Civic that has more than 300 horsepower and many sporty components. For the purposes of simplicity, this overview will simply be comparing the regular Civic with the Nissan Sentra.)

Comparing the standard engine with the Sentra's engine is going to be a fairly even match-up. One of them has the edge when it comes to horsepower, and the other has more torque. In real-world situations, most drivers won't notice a difference between the two. What drivers could notice is the enhanced performance of the Honda's turbocharged engine. The fact that this engine has more capability will make it hard to pass up for drivers who like accelerating quickly and want to be able to drive with more confidence.

Nissan and Honda have matched all of these engines with continuously variable transmissions. These types of transmissions are commonly found in cars of this class, so this isn't really a surprise. Front-wheel drive is standard, and there is no option to get these models with all-wheel drive.

One component that the Civic has is available paddle shifters. The Sport and Touring trims of the Civic come with paddle shifters on their steering wheels, and this allows drivers to take manual control over shifting whenever they want to. Both models have Hill Start Assist, and this can prevent them from rolling backwards when being stopped on a hill. There's always a short lag time when drivers move their feet from the brakes to their gas pedals, and during this time, the Sentra and Civic can hold pressure on the brakes before the vehicle is ready to get moving again.

These cars might not be the most powerful ones in the market, but they're certainly easy to drive. Their compact size has a lot to do with that. Both of them are exactly 182.7 inches long. The Nissan is a tiny bit wider and taller, but basically, these are two light, compact sedans.

The trunk of the Sentra has a volume of 14.3 cubic feet, and the Civic has a slightly larger trunk. Its trunk has a volume of 15.1 cubic feet. This discrepancy may matter to some customers since trunks can quickly fill up with groceries, luggage, and other types of gear.

Most modern consumers are going to be looking at various vehicles' infotainment systems as they shop around. Fortunately, the Sentra and Civic have pretty good technology, especially considering how affordable these models are.

In the Nissan Sentra, the base model has a seven-inch touchscreen. It comes with Apple CarPlay and Android Auto so that it can be simple to connect one's smartphone to the infotainment system. Bluetooth is standard and is useful for making hands-free phone calls, and other features are one USB port and an AM/FM radio with four speakers. People can use the touchscreen, voice commands, or controls mounted on the steering wheel to pick up phone calls, change the radio station, or adjust the volume.

On the higher trims of the Sentra, there are several enhancements. These trims have eight-inch touchscreens, six-speaker sound systems, a total of three USB ports, and SiriusXM Radio. Plus, they have seven-inch digital instrument clusters that provide all kinds of vehicle information. This is an upgrade over the 4.2-inch screen that's found in the base model.

The top trim comes with the option to get a Bose audio system that has eight speakers. This trim also has an available Wi-Fi hotspot. Passengers will definitely appreciate this if they'd like to stream media content on a road trip or if they need to get some work done while traveling.

Things are slightly different with the Civic. That's because its base model only has a five-inch LCD screen. It doesn't have a touchscreen like the rest of the Civic trims do, and it doesn't have Apple CarPlay or Android Auto either. However, it does have Bluetooth so that people can stream audio and make hands-free phone calls. It has an AM/FM radio system with four speakers as well.

The other trims of the Honda Civic all have eight-speaker sound systems, seven-inch touchscreens, and smartphone connectivity. They have at least two USB ports as opposed to only one, which is what the base model has. Mid-level Civic trims have SiriusXM andHD Radio, and the top-level trim has navigation and ten speakers, one of which is a subwoofer. The fact that the Civic has available navigation is going to be significant when this car is compared against the Sentra and other sedans that don't offer this option.

Just like Nissan decided to equip with the Sentra with advanced components to keep people entertained and connected, it also installed many high-tech safety features into this car. Every Sentra has automatic emergency braking, forward collision warning, and pedestrian detection to hopefully prevent frontal collisions. The Sentra even has reverse automatic braking so that driver's won't accidentally back into objects. In addition, the Sentra comes standard with lane departure warning, lane keeping assist, automatic high beams, a driver alertness warning, blind spot monitoring, and rear cross traffic alert. It's not that common that such affordable models have all of these driver-assist systems as standard, so this really helps the Sentra stand out.

Its higher trims have adaptive cruise control, which is a program in which the car can sense the speed of the vehicle in front of it. If that other vehicle slows down when adaptive cruise control is engaged, the Sentra can slow down, too. It can then speed up when appropriate. The most premium Sentra trim has an available around view monitor, and this can provide a driver with useful visual cues when parking or maneuvering around smaller spaces.

Honda is another company that has concentrated a lot of its efforts on driver-assist technology. "Honda Sensing" is the name of the Civic's standard suite of advanced safety features. It includes adaptive cruise control, lane keeping assist, lane departure warning, and road departure mitigation. Plus, the Civic has forward collision warning and collision mitigation braking so that it can independently hit the brakes if a driver doesn't have a chance to respond to a collision warning. Like the Sentra, it has automatic high beams, too.

Higher trims of the Civic have something called Honda LaneWatch. Essentially, it's a blind spot monitoring system, but it goes a step further. It uses a camera to provide the driver with a live feed of the vehicle in his/her blind spot. So that it's not distracting, it would only turn on if a turn signal has been turned on.

The Sentra is priced at a lower point than the Civic is. The Sentra's base model, which is the S, only costs $19,460. In comparison, the LX trim of the Civic costs $21,250. When taking into account that the LX doesn't have a touchscreen or smartphone connectivity, it appears that the S has the better value.

Remember that the Civic EX, EX-L, and Touring all have turbocharged engines, so they're quicker and more exciting to drive than the lower trims of the Civic and all of the Sentra trims. The Touring has integrated navigation, so that's a huge advantage. The EX-L and Touring have leather seats, and the three top trims of the Civic each have a power-adjustable driver's seat and heated front seats. With the Sentra, heated seats are only an option on the top two trims, and they don't have leather seats (though it's an option on one trim). Even a power-adjustable driver's seat is only an option.

Both models do have push button start, and many trims in both models have remote start capabilities. While the top two trims of the Sentra have dual-zone automatic temperature control, they lack the standard auto-dimming rearview mirror that's found in the higher trims of the Civic. Another reason why the Civic is more sophisticated is because some of its model have power moonroofs. These are only optional on the Nissan Sentra.

When analyzing all of the extra features that these cars can come with, it's clear that the Civic is the more refined model. It has some nice materials and amenities that can make the car feel more sophisticated. The top three trims of the Civic have turbocharged engines, and this is going to be really important for many buyers. In many ways, the Civic is a car that offers some surprises and can actually be fairly upscale.

That being said, the Sentra is the cheaper version. Its base model is extremely affordable, having a starting price that's under $20,000. It can be hard to find quality vehicles at this price point, and the Sentra still has a touchscreen, Apple CarPlay, Android Auto, and an impressive list of driver-assist systems.

The Nissan Sentra lacks some of the nicer elements in its cabin, but it has everything that one would need to stay comfortable. It's going to be the more budget-friendly option, with the Honda Civic being the one that would appeal to people with a little more money to spend and those who want to treat themselves to some extra amenities.