2019 Toyota Sequoia Pros vs Cons. Should You Buy? 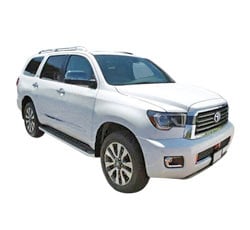 Should You Buy a 2019 Toyota Sequoia? Here Are Some Reasons For and Against

The 2019 Toyota Sequoia is an enticing choice for those looking to purchase a full-size SUV. This impressively large SUV features a wide range of options in the base model, and subsequent upgraded models offer even more luxury upgrades. However, there are some downsides to the SUV as well, especially for drivers who value forward-thinking interior technology in their vehicles.

Toyota has not changed anything significant in its 2019 model as compared to its 2018 model. There are some minimal exterior changes, like a front grille redesign and some headlight changes depending on the trim level purchased. The base trim now comes standard with 18-inch wheels, slightly larger than in previous years.

SUVs are known for their ability to haul full families or tons of cargo on long drives. However, comfort can be limited in some budget SUV models. The opposite is true in the 2019 Toyota Sequoia, which maintains comfort even on extremely bumpy roads. The seats are quite comfortable, absorbing much of the vibration that does enter the cabin - though not much gets through the body of the vehicle, which has been engineered to minimize road noise as well. The Sequoia also comes with an adjustable suspension, meaning that the vehicle maintains smoothness on the road even when filled to capacity.

An integral part of the comfortable ride mentioned above is the low level of noise coming from the exterior of the vehicle. Toyota is known for its attention to body construction, and the 2019 Sequoia clearly demonstrates that attention. Even on poorly-maintained highways at high speed, vibration is barely noticeable. There is some noise from higher winds, particularly at extremely high speeds, but that is to be expected in a vehicle of this size.

You should expect a full-size SUV to have plenty of cargo space, and the 2019 Toyota Sequoia delivers on that expectation. With all seats up, the Sequoia has just under 19 cubic feet of space. But when the back seats fold down, that expands to an absolutely massive 120.1 cubic feet. This huge amount of space is made possible by the back two rows of seats folding down. With just one row of seats (the third row) folded down, there’s still an impressive 67 cubic feet of cargo space available.

The 2019 Toyota Sequoia is one of many full-size SUVs that can tow a significant amount of weight. The maximum towing capacity for a 4-wheel-drive model of the Toyota is an astounding 7,000 pounds, putting it towards the top of the SUV class in terms of weight-pulling capabilities. Its hauling capabilities are up to par, allowing for up to 1,300 pounds to be hauled. Though it’s not the most powerful SUV for towing or hauling, the built-in towing and hauling mode of the vehicle optimizes shifting while under heavy loads. This allows you to waste less fuel and more efficiently switch between gears, a particularly useful feature when towing through hilly country.

If you’re aiming to customize your SUV, then the Sequoia could not be more perfect. There are four distinct trim options available for the vehicle as well as optional packages for two of those trims. The base model, the SR5, includes everything you need in an SUV - a rearview camera, USB/Bluetooth connectivity, LED headlights, and more. The first upgraded model is the TRD Sport, which includes technical upgrades to increase car handling like 20-inch wheels and sporty dampers. The TRD Sport’s taillights are also blacked out, giving it a sleeker look. The Limited trim adds even more to the SR5 base model, upgrading the interior dashboard and opening up some deluxe packages. There’s a package that shifts the interior to only include two seats in the second row, as well as a package that upgrades the sound system in the car. The ultimate Sequoia trim is the Platinum trim, which decks out the vehicle with an extra console, more heated seats, and an even more comfortable suspension.

Some SUVs struggle to heat or cool the entire interior of the vehicle, as that space can be too large to efficiently push air through. The 2019 Toyota Sequoia does not struggle with that problem, pushing heated or cooled air through the car with ease. The front seats and the second row of seats can individually have control over airflow. The front seats get integrated control over the car’s climate control. Though the front seats get more customizability of air temperature and flow options, the second row’s control is no joke - temperature, speed, and mode of climate control are all available for that second seat.

The spacious interior of the 2019 Toyota Sequoia has been mentioned in the context of cargo space, but its roominess for all passengers cannot be overstated. For the front seat driver and passenger, there’s ample space to comfortably shift around until you find an adequate position. In the second row, the optional upgrade to two captain’s seats offer that same level of room availability to those passengers. Even without that upgrade, the second row offers plenty of room for children and adults alike, allowing them to stretch out their arms and legs without any cramping or lack of space.

Full-size SUVs can be nerve-wracking to switch lanes with, as large columns can obscure critical viewpoints that help to inform you of nearby cars. The 2019 Toyota Sequoia has been designed with this in mind and does not have overly large columns or small windows. The rear window is quite large, which allows you to check for small cars safely and back up without worry. The side columns do not create large blind spots either.

The cabin of the 2019 Toyota Sequoia is no slouch when it comes to storage space. Each of the main seats has door pockets and channels to keep easily accessible snacks or temporarily store trash. Each passenger has at least one cupholder, and likely two cupholders (in the Platinum). Many of these cupholders are small in the rear seats and are likely meant for children’s cups. The center console is absolutely massive, able to fit nearly anything that you want to store inside.

Some SUVs struggle to accelerate to full speed in a timely manner. The 2019 Toyota Sequoia doesn’t seem to face that problem, managing to hit 60 miles per hour in just over seven seconds. While this is not the absolute fastest acceleration in the full-size SUV class, it’s near the top - and the V8 engine can reliably keep up that acceleration when necessary. This means that merging onto a highway or changing speeds quickly will never be a stressful event.

Reasons Not to Buy a 2019 Toyota Sequoia – The Cons

The Toyota Sequoia line debuted in 2009, and Toyota has not done more than the bare minimum to keep up with technological trends in the line. Even the top-of-the-line Platinum trim of the Sequoia struggles in the technology arena. The infotainment system only pairs with your smartphone via Bluetooth or USB - no Android Auto or Apple CarPlay. The touchscreen feels low-quality and can be extremely sluggish.

Like most SUVs, the 2019 Toyota Sequoia struggles to handle well on curvy roads. While you can maintain a slower speed to ensure an even grip on the road, high speed turns and sharp corners can cause the SUV to judder a bit. This is compounded by the lack of road feel given by the tires - input from the road to the steering wheel is minimal.

The 2019 Sequoia’s interior quality is somewhat puzzling. While the dashboard and front controls feel robust, some of the cabin plastics feel extremely cheap. There are some bulky plastic panels that take up more space than necessary, but overall the interior feels slightly cheaper than it should.

The 2019 Toyota Sequoia is competing in a very crowded class. It has some notable competitors, like the well-know 2019 Chevrolet Tahoe or the 2019 Ford Expedition. While all of these vehicles serve their purpose well, the 2019 Sequoia outclasses the others in specific areas. It’s a fantastic tower and hauler, and interior comfort is outstanding.

If you’re looking to purchase a full-size SUV this year, then the 2019 Toyota Sequoia should be one of the first you consider. Though it has some downsides, like some lower-quality interior parts and some slightly outdated technology, the Sequoia shines in other areas. Its towing capabilities, outstanding interior comfort, and comfy suspension make this a joy to use and drive on a daily basis.

Save Money on a 2019 Toyota Sequoia:
Are you Shopping for a New Vehicle? Find the Best Deals with "Free - No Hassle" Prices Quotes.