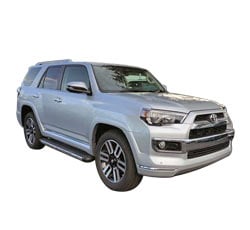 Should You Buy a 2019 Toyota 4Runner? Here Are Some Reasons For and Against

While crossovers have started to dominate the car market, there are still a lot of drivers who appreciate the toughness of a truck-based SUV. The 2019 Toyota 4Runner remains a great choice for the families who enjoy an outdoor lifestyle. Models equipped with 4WD are especially skilled at tackling rough terrain. Despite its many strong points, the 4Runner may not be the best option for some drivers. Let’s find out if this midsize SUV can keep pace with the competition.

1. More Dependable Than Most Competitors

As you may know, Toyota vehicles tend to last for a very long time. The 4Runner’s above-average predicted reliability makes it an outstanding investment. Whether you use the 2019 Toyota 4Runner for everyday commuting or weekend adventures, it should deliver a dependable performance. A sturdy design helps the SUV to withstand a wide range of challenging conditions. You can also take advantage of the 4Runner’s rather affordable cost of maintenance.

Although the 4Runner’s standard V6 engine isn’t highly advanced, it has proven itself to be very durable. Toyota rates this engine to produce a fulfilling 270 horsepower and nearly 280 pound-feet of torque. Toyota’s five-speed automatic transmission is just as tough. With an average 0-60 time of 7.5 seconds, the 2019 Toyota 4Runner is certainly not slow. When you need to pass another vehicle, there’s always a healthy kick under the hood.

3. Can Handle Any Adventure

The 2019 Toyota 4Runner is far more rugged than a car-based crossover. This is why it attracts so many adventure seekers. If you truly want to explore the backcountry, step up to the TRD Pro. It’s specially designed to overcome nature’s toughest challenges. TRD-tuned shock absorbers help keep the 4Runner TRD Pro stable over rough terrain. Meanwhile, a thick skid plate protects the undercarriage from rubble.

Because of the Toyota 4Runner's truck-based frame, some people may expect it to drive more like an old-school pickup. However, the 2019 Toyota 4Runner is actually quite balanced on the road. Accurate steering makes it easy to drive. While the 4Runner will never be mistaken for a sporty vehicle, it’s very confident around curves. A special X-REAS suspension makes the luxurious Limited model feel especially controlled.

If you don’t like the easy-going appearance of most crossovers, the new 4Runner could capture your heart. It has a very tough appearance. Even the base SR5 model looks like it means serious business. A bold front fascia and projector-beam headlights come standard. Meanwhile, an available hood scoop adds to the 4Runner’s sporty look. While some drivers will like the TRD Off-Road model’s adventurous styling, others will prefer the upscale Limited model.

An optional third row increases the 4Runner’s capacity to seven people. While the third row provides enough space for kids, the first two rows will comfortably accommodate adults. Heated and ventilated front seats are found in the range-topping Limited model. The 2019 Toyota 4Runner also offers good utility. A squared-off design enables the SUV to offer a lot of cargo space. When camping, you can fold down the rear seats for sleeping.

Drivers who want to limit their spending should consider the base 4Runner SR5. Prices start at around $34,900, which is thousands of dollars less than the TRD Off-Road model. It comes standard with features that outdoorsmen love, including roof rails and rugged skid plates. There’s also ample equipment on the inside. Some of the highlights consist of a 6.1-inch touch screen, a media player interface, and an eight-speaker sound system.

Although the 4Runner takes up space, available parking sensors make it a bit easier to steer into narrow spots. When attempting to squeeze between two cars, the parking sensors will help you to avoid costly fender benders. It never hurts to have an extra peace of mind.

A lot of families will enjoy the 4Runner’s powered rear window. When driving around on a hot day, the ventilation will help cool the cabin. Dogs will especially appreciate the extra breeze. If you happen to be traveling off-road, you’ll also be able gain better outward visibility. It can easily be rolled down at the simple touch of a button.

If you’re looking for a fuel-efficient family vehicle, the 2019 Toyota 4Runner will not make you smile. You can anticipate getting an EPA-estimated 17 mpg in urban areas and 21 mpg on the highway. When pulling a heavy load, expect to get even worse gas mileage. The bright side is that you don’t have to use premium unleaded fuel.

2. Some Models Are On the Expensive Side

The 2019 Toyota 4Runner is not the cheapest SUV in the class. Stepping up to the higher trim levels will cause you to fork over a lot of money. Prices for the stylish Nightshade Edition start at roughly $45,000. Meanwhile, the beefy TRD Pro model demands an additional $1,500. If you don’t plan on venturing off-road, you’ll save money by getting an SUV such as the 2019 Nissan Pathfinder or the 2019 Kia Sorento.

All versions of the 2019 Toyota 4Runner are equipped with a reversing camera. Unfortunately, it’s the most advanced safety feature available on the 4Runner. You won’t be able to get advanced driving aids such as forward collision alert and blind-spot detection. These features are available on the more family-friendly Toyota Highlander.

When it comes to safety, the 4Runner has a few blemishes. Not only the IIHS give the 4Runner a “Marginal” rating for its driver-side front impact protection, but it also gave the SUV’s headlights a poor rating. A three-star rollover rating by the NHTSA is also a weak point for the new 4Runner.

The 4Runner’s high ground clearance helps make it a formidable off-road machine. However, a tall step-in height makes it difficult for some people to climb aboard. This is especially true for small kids and elderly family members.

The 2019 Nissan Pathfinder is also a good alternative to the 4Runner. Although the Pathfinder is a less capable off-road performer, it provides a higher level of passenger comfort than the 4Runner. Nissan’s optional dual-screen entertainment system will keep kids happy on road trips.

Although the 4Runner can’t match the practicality of a modern crossover, very few SUVs have such an adventurous character. Whether you’re climbing a snowy mountain or driving along a muddy trail, the 2019 Toyota 4Runner will inspire confidence. Because of the 4Runner’s proven reliability, you won’t have to worry about putting miles on it. Before you buy a new 4Runner, be aware of its shortcomings. This SUV’s poor fuel economy and lack of safety technologies may turn away some buyers. Furthermore, some of the upper trims may be beyond your budget.

Save Money on a 2019 Toyota 4Runner:
Are you Shopping for a New Vehicle? Find the Best Deals with "Free - No Hassle" Prices Quotes.