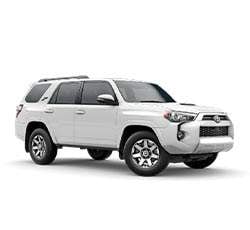 To find the best possible price on a new Toyota 4Runner, shop prices online first. Get up front pricing before you walk into a dealership. We recommend the following free services; Car Clearance Deals,   Edmunds,   NADAguides,   Motortrend  &   CarsDirect
These services will offer you the lowest prices and supply you with multiple competing price quotes. You will know the best price before you visit the dealer.

How to Calculate The Dealer Cost of a Toyota 4Runner

The 4Runner has been around for awhile, and throughout its history, it's been known as a rugged and tough SUV with an adventurous spirit. The 2022 version of the Toyota 4Runner stays true to form. It's powerful and agile, and it has excellent off-roading capability. At the same time, it has a modern technology package and convenient interior features. However, some may find the 4Runner to be a bit pricey considering the entire package that it has to offer.

This year, the TRD Sport trim joins the 4Runner lineup. The TRD Sport looks more athletic than some of the others and has adaptive dampers. Also, the Toyota SUV now has standard LED high beams.

A strong four-liter V6 provides power to the 4Runner. It can generate 270 horsepower and 278 pound-feet of torque, and it works with a five-speed electronically controlled automatic transmission. There isn't a manual option, but there is a sequential shift mode that gives drivers some control over shifting, if they're looking to have that type of experience.

Both a 4x2 and a 4x4 drivetrain are available. Some trims have a part-time 4WD system, while a select few have full-time 4WD. The 4x4 drivetrain can be enhanced with a locking differential for better traction in tough conditions.

Multi-Terrain Select is an available system that gives drivers the option to choose from four terrain modes. With this program, performance can be optimized if the SUV is facing a snowy path or a muddy trail, for instance.

If the 4Runner is dealing with uneven terrain, the available Kinetic Dynamic Suspension System can kick in. It can decouple the sway bars to improve wheel articulation. When the path evens out again, the sway bars can automatically reconnect.

Another useful feature is available Crawl Control. It makes adjustments to the throttle and brakes so that the driver can remain focused on steering around obstacles and picking the best path to take. Some models may even have a Multi-Terrain Monitor that provides a video feed that shows what's in front, behind, and to the side of the vehicle.

This Toyota can tow heavy loads if necessary. It has a towing capacity of 5,000 pounds, and it comes standard with a towing receiver hitch, harness, and connectors.

It probably comes as no surprise that the 4Runner isn't very efficient. Yes, it can tackle all sorts of challenges, but it takes a lot of gasoline to do so. Its fuel economy is only estimated to be 16 miles per gallon in the city and 19 miles per gallon on the highway.

This SUV sits high off the ground, having a clearance of up to 9.6 inches. It has a boxy frame and a tall cabin. Some customers really prefer this somewhat traditional look, which makes the 4Runner seem like it could be perfectly comfortable in the fields or woods, far away from the city.

Total cargo capacity is nearly 90 cubic feet. This isn't as much space as what a minivan could offer, but it is a lot of room.

What's somewhat unique about this vehicle is that some of its models have three rows, while others have two rows of seats. Out of the eight total trims, the SR5, SR5 Premium, and Limited are the ones available with a third row of seats. It's important to keep in mind that the third row isn't that big. It has less than 30 inches of leg room, and it only has space for two additional people.

Unlike some other three-row SUVs, the Toyota 4Runner is not available with captain's chairs in its second row. All models have a bench seat in that row, providing room for up to three people. The bench seat is split into a 60/40 configuration so that each side can be lowered independently of the other.

There are some nice features that all of the 4Runner trims get to have. For example, they come with a smart key entry system and push-button start. They have leather-trimmed steering wheels with audio controls, and they have multiple cup holders, small storage compartments, and four USB ports. They even feature a first aid kit, which is a clever way to attract more spirited customers to the vehicle.

Only the Limited has leather seats with heated and ventilated front seats. The others either have SofTex or fabric upholstery, and some don't even have heated front seats.

An eight-inch touchscreen can be found on every 4Runner. It comes along with Android Auto, Apple CarPlay, and Bluetooth, and as part of Toyota's standard technology package, it also has Amazon Alexa and SiriusXM. This partnership with Amazon Alexa gives users easy access to information and can be used to communicate with other Alexa devices. Customers can appreciate that navigation and a JBL speaker system are available, and so is a panoramic view monitor.

In addition, every 4Runner trim has driver-assist technologies that are part of the Toyota Safety Sense P suite. Various monitoring systems can keep an eye on how things are going, and if there are certain types of issues, automatic emergency braking and/or corrective steering can be applied.

The 4Runner will appeal to those who like its rugged appearance and V6 engine. It's not the most luxurious vehicle, but it definitely is ready for the trails.

Note: All Toyota 4Runner MSRP, invoice and dealer cost dollar figures above are subject to change without notice.