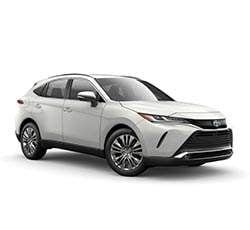 Toyota Venza Pricing for the LE, XLE and Limited Trims

To find the best possible price on a new Toyota Venza, shop prices online first. Get up front pricing before you walk into a dealership. We recommend the following free services; Car Clearance Deals,   Edmunds,   NADAguides,   Motortrend  &   CarsDirect
These services will offer you the lowest prices and supply you with multiple competing price quotes. You will know the best price before you visit the dealer.

How to Calculate The Dealer Cost of a Toyota Venza

The Toyota Venza is a hybrid SUV that's fairly upscale. After several years off the market, the Venza was returned to Toyota's lineup in 2021. Since then, the company hasn't made any significant changes to the model. It continues to have a nicely appointed cabin with plenty of technology. The one thing that might not work in its favor is its starting price, which is relatively high considering all of the other options in the ever-growing SUV market.

This amount of horsepower is certainly good, but far from great. However, most average drivers will likely be happy with how the Venza handles itself. This is especially true because the Venza comes standard with electronic on-demand all-wheel drive. It also has active cornering assist and hill start assist control.

There is an opportunity to liven things up when driving the Venza. It has a few different modes that can change the way it responds. Sport mode would result in a more engaging experience, while Eco mode would do the opposite in favor of being more efficient. Normal mode would be the default setting.

An EV mode is an option, too. This would allow the vehicle to run purely on electric power. Keep in mind that this would be only applicable at low speeds and for very short distances, since the Venza isn't a plug-in hybrid or a 100% electric vehicle.

As a hybrid, the Venza does very well in regards to efficiency. It's able to earn up to 40 miles per gallon in the city and 37 miles per gallon on the highway. Fuel economy is better with city driving than highway driving because the system can capture some of the energy generating when braking.

The cabin feels pretty roomy. Second-row leg room is 37.8 inches, which is close to what one would find in most other two-row SUVs. Cargo volume is about 29 cubic feet, and it can be expanded to approximately 55 cubic feet when the rear seats have been lowered.

Where the Venza really shines is in terms of its amenities and style. It looks elegant with its silver door handles, leather-wrapped steering wheel, leather-wrapped gear shifter, and soft-touch dashboard. Every trim has a smart key system, push button start, and dual-zone automatic climate control, and even wireless charging is a standard component.

All trims have power-adjustable front seats. On the base trim, which is the LE, the seats are covered in fabric. The mid-level trim, the XLE, has seats wrapped in a synthetic material called SofTex, and the Limited trim has perforated SofTex seats. Some might be disappointed that genuine leather isn't available. The XLE keeps people warm with heated front seats, and the Limited provides year-round comfort with heated and ventilated front seats.

The XLE and Limited have little stylistic details that can be appreciated. For instance, they have silver scuff plates, illuminated footwells, and a wood-grain-style trim on their center consoles. The Limited gets to have a heated steering wheel and a 360-degree camera system, as well as a digital rearview mirror. That mirror can be used as a traditional mirror, but it can also function as a display that shows what the camera at the back of the vehicle is seeing. This is convenient when the cabin is filled with tall passengers and/or cargo that might be blocking the view.

A Star Gaze panoramic roof is available, but only on the Limited. It adds so much to the ambience in the cabin, and it has a very cool feature that allows it to switch from being transparent to frosted.

A large touchscreen is integrated into every 2022 Toyota Venza. It comes complete with Apple CarPlay, Android Auto, Amazon Alexa, and SiriusXM, in addition to Bluetooth and voice recognition. This long list of features is one reason why new Toyota vehicles are so popular. People can easily access their phones while driving, and the infotainment system is easy to use.

On top of having standard wireless charging, the Venza has four USB ports. Passengers won't have to negotiate with each other over access to a charging port.

A premium system is available on the XLE and standard on the Limited. This system has a 12.3-inch touchscreen instead of the standard eight-inch one. Also, it comes with nine JBL speakers and dynamic navigation.

Toyota Safety Sense 2.0 is the standard safety package. It gives the Venza the ability to sense potential frontal collisions and know when it's veering out of position. If so, the vehicle can warn the driver and can take corrective measures, if necessary. Other components that are part of the package are road sign assist, automatic high beams, and adaptive cruise control.

Though they're not part of Toyota Safety Sense 2.0, blind-spot monitoring and rear cross-traffic alert are standard as well. The two higher trims are further enhanced with sensors that can notify drivers when they're getting too close to objects when parking. A corresponding feature allows the Venza to hit the brakes to avoid getting scrapes and dents if this is the case.

Note: All Toyota Venza MSRP, invoice and dealer cost dollar figures above are subject to change without notice.