2019 Toyota Highlander Pros vs Cons. Should You Buy? 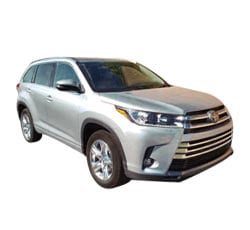 Should You Buy a 2019 Toyota Highlander? Here Are Some Reasons For and Against

The 2019 Toyota Highlander is a large three-row sports utility vehicle that centers its appeal around being a family-friendly daily driver. With good gas mileage and plenty of interior space, the Highlander does a good job of living up to this promise. However, it has some drawbacks, such as a lackluster base engine and still no smartphone app integration availability. Thankfully, there are plenty of safety features and an optional all-wheel drive system that make up for some of the Highlander's shortcomings.

Not too many changes have been made to the 2019 Toyota Highlander, which was overhauled for the inauguration of its third generation back in 2014 and revamped in 2017. Most interior and exterior elements remain the same (save for some new wheel and color options), as do powertrain options. A few minor changes have been made to the list of safety and infotainment features for the model year.

1. A Spacious and Friendly-Family Cabin

There is plenty of space for a growing family to fit within the 2019 Toyota Highlander. While the third row might feel a bit cramped for larger adults, it is definitely suitable for children and teens. The first and second rows both have an abundance of head, shoulder, hip, and leg room available. Although cargo space is pretty average for its segment, there is sufficient room to store cargo, especially if you fold the seats down. The cabin itself is quite comfortable, and the seats offer plenty of lumbar support.

One of the things drivers and passengers love best about the Toyota Highlander is that it offers a smooth and quiet ride. Noise from the wind, road, and engine fail to seep into the cabin, even when the vehicle is taken up to speed on the highway. Push the Highlander into full throttle, and you still won't notice much. Overall, this has to be one of the calmest and most well-insulated SUVs out there.

Toyota tends to load its vehicles up with a long list of standard safety features, and the 2019 Toyota Highlander is no exception to this rule. The Highlander hosts the Toyota Safety Sense bundle, which includes lane departure warning, adaptive cruise control, automatic high beams, and the pre-collision system. The pre-collision system comes with a rearview camera and forward collision detection with automatic emergency braking. There are also plenty of optional safety features and those that come standard on the higher trim levels (such as the 360-degree camera on the line-topping Limited Platinum trim).

Although the standard base 4-cylinder engine feels underpowered, the V6 option certainly makes up for it. It comes as an option for the base LE trim and is standard on all of the other trim levels. The V6 puts out 295 hp and 263 lb-ft of torque, which is a respectable amount of power for a vehicle in this segment. With the V6 equipped, there is the option for adding all-wheel drive to the Highlander. The addition of all-wheel drive gives the vehicle's driving performance a refined sensation and makes it all the more ideal for off-roading adventures.

Larger SUVs are not exactly known for being very fuel efficient, but the 2019 Toyota Highlander manages to pull some decent numbers. The LE trim gets about 22 combined mpg (20 mpg city and 24 mpg highway). Bumping up to the V6 engine with the 8-speed automatic transmission will get you slightly better numbers at 23 combined miles per gallon. Even when you equip all-wheel drive with the V6, you still get a respectable 22 mpg combined. Finding another vehicle in this segment that gets such numbers is not easy.

With the V6 equipped, acceleration on the Toyota Highlander feels swift for the SUV segment. The pairing of the V6 with the 8-speed automatic transmission seems to be what really gives the Highlander such a nimble feel to it. This SUV might look more truck-like, but it accelerates at a speed closer to a large sedan. Also, you won't have to worry about making any panic stops, as the brakes on the Highlander create one of the shortest stopping distances available on an SUV.

Here is another reason to skip right over the 4-cylinder base engine. The V6 that is equipped with all-wheel drive makes for quite a sturdy off-roading vehicle.The 2019 Toyota Highlander does not have low-range gearing, so having AWD in addition to hill descent control and hill hold helps to boost the performance. Of course, the 8 inches of ground clearance do not hurt. Taking the family off-roading becomes fun when you equip the Highlander with the right essentials.

8. A Ton of Small Item Storage

Wherever you look in the Toyota Highlander, there seems to be a well-crafted storage compartment to fit your everyday needs. For example, up front on the dash, there is a built-in shelving unit that is the perfect fit for storing cell phones, small tablets, or other personal items that you might need to stash. Beneath the sliding armrest cover, there is a storage bin that is massive enough to hold a medium-sized purse or even a laptop.

When equipped with all of the essentials, the 2019 Toyota Highlander becomes a very capable tower. The maximum towing capacity of 5,000 pounds keeps it in competition with other vehicles in its segment. In fact, there are only a few competitors this year who manage to beat this number.

One of the things that many drivers have found noteworthy about previous model years is that the Toyota Highlander's interior materials are not prone to falling apart over time. Even after a year or two of wear and tear, nothing typically comes unscrewed or loose. Also, the materials manage to look nice even on the lower trims, and the upgraded upholstery that you can get on the LE Plus trim and above lend a more sophisticated look to the Highlander.

Reasons Not to Buy a 2019 Toyota Highlander – The Cons

1. The Third Row is Slightly Cramped

As is the case with many vehicles in this class, quarters are cramped in the third row. Children can squeeze in just fine, but adults will certainly have a tougher time keeping their knees from banging the backs of the second row of seats. While there are three seatbelts in the back, it is best to only try to fit two children back there since space is limited.

2. The Base Engine is Not Very Exciting

In all honesty, it is best to just skip straight over the base engine on the LE and go for the V6. The standard engine is a 2.5-L 4-cylinder that is only capable of putting out 185 hp and 184 lb-ft of torque, which is nowhere near the amount of power required to get this vehicle up and moving. Not to mention, the 4-cylinder only comes with front-wheel drive and a 6-speed automatic transmission that pales in comparison to the smoothness of the 8-speed you can get with the V6. In this case, you really do get what you pay for.

3. Apple CarPlay and Android Auto Still Are Not Available

Although Toyota is piloting the use of Apple CarPlay in three of its vehicles this year (the Corolla, RAV4, and the Avalon), the Highlander will not come equipped with smartphone app integration. This simply does not make sense and shows a lack of progression on Toyota's part since these features now come standard across the line-ups of many of Toyota's competitors. Toyota is going to have to broaden its horizons more next year if it wants to keep pace with other automakers.

4. Controls Can Be Difficult to Reach

One of the more minor gripes that drivers might have with the 2019 Toyota Highlander is that some of the controls along the dash and on the touchscreen display monitor might be difficult to reach, especially for those with a short wing span. Controls are not the most intuitively placed, either, so they will likely take some getting used to.

The 2019 Honda Pilot closely rivals the Highlander in terms of its fuel economy, performance, and spaciousness of the cabin. It does have a more generously designed third-row of seating and all the smartphone app integration features you could want, but its 9-speed automatic transmission seriously lacks refinement.

In terms of cost, you'll pay a lot more for the 2019 Acura MDX. Of course, the interior is even more upscale, and the engine is even more powerful than the Highlander's V6. However, the MDX has issues with how the V6's auto start-stop feature works and with adaptive cruise control being sluggish in its response.

The 2019 Toyota Highlander could use a few more improvements, and it seems that Toyota is finally opening up to the idea of smartphone app integration. Despite its drawbacks, the Highlander puts in a strong performance with its V6 engine and features more than enough safety features to satisfy the average driver.

Save Money on a 2019 Toyota Highlander:
Are you Shopping for a New Vehicle? Find the Best Deals with "Free - No Hassle" Prices Quotes.