2017 Volkswagen Beetle Pros vs Cons. Should You Buy? 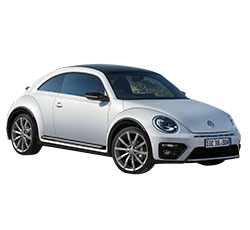 Should You Buy a 2017 Volkswagen Beetle? Here Are Some Reasons For and Against

The Beetle is one of the world's most iconic cars. It's legendary for its design and appearance, and it's an appealing car for couples and small families. In this post, we will list 10 good reasons to consider buying the 2017 Volkswagen Beetle and then some cons for more context.

The 2017 Volkswagen Beetle has a new bumper design this year, as well as a limited pink color. The R-Line trim is no longer available and all models now only have automatic transmission, with no manual versions either standard or optional.

The subcompact is a class that is typically a budget-oriented purchase, but the 2017 Volkswagen Beetle has a surprisingly nice interior. The material is mostly plastic, but it's high-quality and well-molded. The design is clean and closer to minimalist, but that's a welcome change from cluttered consoles and dashes. The cabin also insulates you from road noise rather well.

Although the 2017 Volkswagen Beetle is one of the more athletic subcompacts, it still packs a notable amount of cargo space. You get 15.4 cubic feet without folding down the back seat and 29.9 cubic feet if you do. There are subcompacts with more space, but most of them have boxy designs with worse handling.

Both the standard and optional infotainment choices are strong for this class. The base trim has a 5-inch touchscreen, Bluetooth connectivity, rear camera, and a USB port. Higher trims open up the option for a a 6.3-inch screen, a satellite radio tuner, smartphone integration for both iOS and Android, and onboard navigation. There are buttons on each side if you don't like using touchscreens, which helps with ease of use.

The 2017 Volkswagen Beetle has a turbocharged engine with 170 horsepower, which is quite good for a subcompact. That gives it notable speed and handling, both on the highway and on city roads. If you wish, you can opt to move into Sport mode for temporary manual control over the transmission, which is especially good for passing on highways and other similar situations.

It's not uncommon for subcompacts to have boring exteriors, but the 2017 Volkswagen Beetle bucks this trend for a sporty, almost flashy set of lines. It's a testament to the viewpoint of the designers when you pair this with the engine-- it truly does feel sporty inside and out, which contributes significantly to the feeling of being in a car that is more upscale than its price tag says.

The 2017 Volkswagen Beetle lives up to its appearance not only through its engine, but also in how well it handles corners, acceleration, and rough roads. It feels much smoother than other subcompacts at any speed, while other cars tend to start getting a little rough on the highway or when they have to deal with poorly maintained roads.

Interested in a convertible? The 2017 Volkswagen Beetle has that frame as an option on some trim levels. It generally leads to less cargo space, but for local driving or just for fun, it's an unparalleled experience. A convertible that handles well and has a strong engine is a blast to drive at any size, and it isn't easy to find a make that offers this option at this low of a price point.

The Beetle is one of the most well-known designs in the world. It always catches the eye and it is instantly recognizable. Consider the 2017 Volkswagen Beetle just the latest in a long tradition of car design. There's a reason it has stuck around this long: it has a timeless appeal that remains popular for its combination of a classic feel and modern tweaks.

Most subcompacts are more at home in narrow city streets and parking spaces than on the highway, but the 2017 Volkswagen Beetle feels good in any context. It has the power for the highway, the handling for winding roads, and the size and response for traffic in the city. Combine that with a fair amount of cargo space and the Beetle becomes a do it all vehicle.

The 2017 Volkswagen Beetle scores better on reliability than its closest competition, the Fiat 500 or the Mini Cooper. JD Power rates cars based on their predicted reliability, and the Beetle got three out of five, which is above average for the subcompact class.

Reasons Not to Buy a 2017 Volkswagen Beetle – The Cons

While the Beetle gets 24 MPG on city roads and 33 on the highway, that still is not quite as fuel-efficient as some of the pricier cars in this class. The efficiency on subcompacts in general is very high, but the fact remains that if you want to, you can find similar cars that have a few MPG higher.

The design of the Beetle has created a slightly obstructed rear view. This can be annoying when you are trying to parallel park or just keep an eye on the traffic behind you. The problem can get worse if you have anything stowed in the back, because you will have a hard time seeing around it. Try a test drive and load up the rear storage to see how it feels to you.

Perhaps this is in line with the advanced features and components of the 2017 Volkswagen Beetle, but the pricing on most of the trims is not the lowest in the class. Some other makes offer more budget-friendly selections. The choice comes down to how you want to spend your money. It is true that the Beetle costs more, but it also justifies that price tag by adding more to the pot, so it comes down to what your limit is.

How it Stacks Up to the Competiton

The two closest subcompacts to the Beetle are the Mini Cooper and the Fiat 500. The Beetle has better features than both and is more powerful, although the Cooper has even sportier handling.

The 2017 Beetle lives up to the standard of its predecessors. It is an upper-tier subcompact with a few flaws, notably its efficiency and rear visibility.