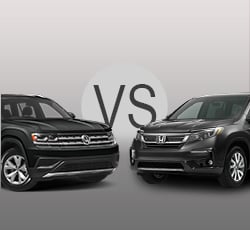 Today's drivers often find themselves needing room for more than five people. That's why there are so many three-row SUVs currently dominating the market. They manage to be practical without feeling as dull as a minivan can. Essentially, they are the perfect vehicle for a modern family.

The Volkwagen Atlas may not be the first midsize SUV that comes to mind. Buyers will want to be sure to consider it, however, due to its well-designed cabin that has plenty of space for everyone. At the same time, the engine options leave a bit to be desired and it is not as fuel efficient as rivals.

Fuel economy is not as much of an issue for the Honda Pilot. This is another large three-row SUV offering to check out. It also has a roomy interior that can be used in a variety of ways to haul both people and cargo. On the other hand, many feel that the cabin is growing outdated and that the list of standard infotainment features is lacking.

Both the 2020 Volkswagen Atlas and the 2020 Honda Pilot have a lot to offer. No vehicle is perfect, but buyers will want to decide which one comes closer for their unique needs. The following summary of both midsize SUVs will help make the choice clearer.

There are a whopping seven different trim levels of the 2020 Atlas to consider. All of them are powered by one of two engines. For the S, SE, SE with Technology, and SEL trim levels, a turbo 2.0L four-cylinder is standard. It will give drivers 235-horsepower and 258 lb-ft of torque to work with.

The remaining trims, known as the SE with Technology R-Line, SEL R-Line, and SEL Premium, get a 3.3L V6 instead. This brings power up to 276-horsepower and 266 lb-ft of torque. Although the numbers look good for both engines, they both struggle to move the heavy Atlas.

Front-wheel drive is standard for all models with the exception of the SEL Premium. Buyers who want all-wheel drive can have it on any trim level, provided they go with the V6 engine. Both engines work with an eight-speed automatic transmission.

The 2020 Pilot also gives buyers plenty of options with six different trim levels. However, there is only one engine available across the line. It is a 3.5L V6 and it will make 280-horsepower and 262 lb-ft of torque. Although its not much more power than the Atlas, the Pilot is also slightly lighter, giving it better acceleration.

Front-wheel drive is also standard here. The Elite and Black Edition trim levels go with all-wheel drive. Buyers can upgrade the lower four trim levels to this drivetrain as well. The lower three trim levels use a six-speed automatic transmission while the upper three go with a nine-speed.

Both the Atlas and the Pilot handle well, although neither would be considered sporty. The Pilot does seem more nimble and offers a well-cusioned ride. For the Atlas, drivers will find that it corners well and has more responsive steering.

The Atlas is EPA estimated to get 20mpg in the city and 24mpg on the highway. Although that city estimate is where it should be, the highway fuel economy is not. The V6 engine dips down lower, giving drivers 17mpg city and 23mpg highway. All-wheel drive, which is only available with the V6, will have the Atlas getting 16mpg city and 22mpg highway.

For the Honda Pilot, models with the nine-speed automatic transmission also get 20mpg in the city but they go up to 27mpg highway. Six-speed automatic models get 19mpg city. Going with all-wheel drive will drop down any of those numbers by just one.

As far as warranties go, the Pilot sticks with tradition. Buyers get three years or 36,000 miles standard and five years or 60,000 miles powertrain. Volkswagen shakes things up a bit, giving buyers four years or 50,000 miles for both the basic and powertrain coverage. This warranty is new for 2020 and is significantly shorter than what used to be offered.

J.D. Powers provides trusted predicted reliability ratings for new vehicles. The Honda Pilot gets an unimpressive 2.5 stars out of five, which is around average. Buyers will find the Atlas did just a bit better with a score of three stars.

The seating capacity of the Volkswagen Atlas is seven. With the standard setup, the Honda Pilot seats eight. Second-row captain's chairs are available, which will bring the seating capacity down to seven. Overall passenger volume is nearly identical between the two, with the Atlas having a slight edge.

In the front row, the Atlas offers nearly two extra inches of headroom. It offers about half an inch more legroom as well. The Pilot, however, has nearly an inch more hip room. It also has half of an inch more shoulder room.

When looking at cargo space, the 2020 Atlas is hard to beat. Behind its third row, drivers get 20.6 cubic feet. Behind the second row is 55.5 cubic feet. The maximum cargo capacity is 96.8 cubic feet. While not as impressive, the Pilot does decent in this category as well. It has 16.5 cubic feet behind the third seats and tops out at 83.9 cubic feet when the seats are down.

As far as exterior size goes, these SUVs are once again very similar. The Pilot may be a bit easier to maneuver because it is nearly two inches shorter in length. At the same time, it is just a bit wider and just a bit taller.

The Pilot, on the other hand, falls behind when comparing standard tech. It comes with a 5-inch touchscreen and Bluetooth, but not much else. The standard stereo system does have seven speakers. Luckily, buyers do not have to go far up the trim ladder if they want more. The EX, which is just one step up, adds an 8-inch touchscreen and smartphone integration with both Android Auto and Apple CarPlay.

Passengers will be comfortable in the Atlas. The cabin is well-insulated and stays relatively quiet when on the road. Volkswagen uses premium materials for the front seats, although more and more plastic is found when moving further back.

The Pilot is also comfortable and comes with supportive seats. Drivers will find that the seat setup provides them with great visibility. Premium materials are also found in this midize SUV, although it is starting to feel a bit dated overall.

Another reputable organization that performs crash testing is the Insurance Institute for Highway Safety. They awarded the Atlas with a score of "Good" is all six of its crash tests. The standard headlights were considered "Poor." Unfortunately, the more sophisticated ones found on the SEL Premium only upgraded this score to "Marginal."

The 2020 Honda Pilot is a top safety pick according to the IIHS. It got a score of "Good" for five out of six tests and a score of "Acceptable" for the last one. The headlights do better for the Pilot, getting either an "Acceptable" or "Good" score, depending on the model.

Moving onto standard safety features, the Atlas comes with an admirable amount. Drivers get a post-collision braking system, a blind-spot monitor, rear cross-traffic alert, and a rearview camera. There is also a forward-collision warning complete with both pedestrian detection as well as automatic emergency braking.

For the Pilot, Honda has included several driver aids. Like the Atlas, it comes with forward collision warning and a rearview camera. Unlike the Atlas, it also gets adaptive cruise control, road departure mitigation, lane keep assist, automatic high beams, collision mitigation braking, and lane departure warning. Buyers have to pay extra to get the blind-spot monitoring and rear cross-traffic that comes standard on the Atlas.

The only other available driver aids for the Pilot are front and rear parking sensors. These are also available for select models of the Atlas. Buyers can add many other things to the Atlas as well. Examples include a surround-view camera system and parallel park assist. It can also have features that are standard on the Pilot, such as lane departure warning, adaptive cruise control, and automatic high beams.

Which Has the Better Value

For many buyers, how much a vehicle costs is the deciding factor. Both the initial cost and the cost of ownership should be considered. This helps ensure that the vehicle will fit into the budget for the long haul.

The starting price for an entry-level Atlas is $31,545. This is considered affordable for the class. Each trim level up adds more to the price tag, with the top-of-the-line model starting at just under $50,000.

Buyers will find that the prices for the Honda Pilot are incredibly similar. It, too, can be had for around $31,550. Moving all the way up to the top model will mean spending nearly $50,000 for this SUV as well.

A strong case can be made for the entry-level Atlas being a better value. Although it does not have quite as many safety features, it does offer much more impressive technology. The more updated feel of the cabin and larger cargo hold may also factor in for buyers.

The full picture of what a vehicle will cost can be found out by looking forward to the next five years. For the Atlas, buyers can expect to spend just over $22,000 out-of-pocket. This is the money that goes toward repairs, insurance, fuel, maintenance, taxes, and more. During the five year period, the Atlas is estimated to lose about $17,800 in value. Add those numbers up and drivers are looking at $39,800.

Pilot drivers will do a little better. It's out-of-pocket expenses are estimated to be around $21,500. Maintanence costs are lower in comparison to the Atlas. As for loss of value, buyers are looking at roughly $17,000. Added together these numbers bring drivers to $38,500.

Either the 2020 Volkswagen Atlas or the 2020 Honda Pilot will serve families well. The Atlas is the choice for anyone who wants to stay at the entry-level trim and still get cutting-edge tech. It is also the way to go for anyone who needs as much cargo space as possible.

The Pilot, on the other hand, is more fun to drive. It has more standard driver aids, something that will appeal to safety-conscious parents. The better fuel economy and overall lower cost to own will also appeal to those trying to stick to a budget.

Save Money on a 2020 Volkswagen Atlas:
Find New Car Clearance Prices - Many Vehicles are Selling Below Dealer Invoice Prices.