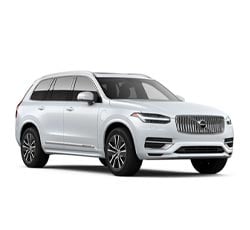 The 2021 Volvo XC90 is a luxury offering in the midsize SUV class. This is the only three-row option in the current lineup, so Volvo holds nothing back. The XC90 is equipped with safety and tech features galore, plus available with three appealing powertrains. This SUV also has a pleasing style, both inside and out, and some of the most sophisticated comfort options currently out there.

This SUV is in its second generation, which debuted in 2016. The XC90 makes some significant improvements for 2021. Standard now on all models are sophisticated features like adaptive LED headlights, front parking sensors, and high-pressure headlight washers. Tech gets an upgrade, too, with the 2021 XC90 getting standard wireless device charging along with two USB-C ports in the backseat. The previously named T8 hybrid engine is called the Recharge starting this year.

The Recharge powertrain is a combination of the T6 and an electric motor and battery pack. With their output combined, this provides 400-horsepower and 472 lb-ft of torque. The Recharge is a plug-in hybrid powertrain. When fully charged, it can provide drivers with up to 18 miles of pure electric power.

The T5 engine can be paired with front-wheel or all-wheel drive. Models that have this engine and FWD can get 21mpg city and 30mpg highway. Choosing AWD means that the city drops to 20mpg and the highway drops to 27. The T6 engine is always paired to AWD and has the 2021 XC90 getting 18mpg city and 26pg highway. As for the Recharge model, also exclusively available with AWD, it gets a combined 55MPGe when drivers keep the battery charged.

With front parking sensors joining the list, the 2021 XC90 is even better protected from all angles. Other standard features for this three-row SUV include rear parking sensors, a driver drowsiness monitor, blind-spot monitoring, adaptive cruise control, and lane departure warning, just to name a few. Optional driver aids like the 360-degree camera system and hands-free park assist can make arriving and leaving even easier.

All models of the XC90 come with the very impressive Sensus infotainment system developed by Volvo. It runs on a 9-inch touchscreen. Also standard is a 10-speaker audio system, along with wireless device charging and smartphone integration via Apple CarPlay and Android Auto. All models with the T6 or Recharge powertrain also come standard with navigation.

Some heavy-hitting stereo upgrades are available for the XC90 in 2021. Option one is a 14-speaker setup from Harman Kardon. The second option is a 15-speaker audio system designed by Bowers & Wilkins.

The luxury is apparent inside the XC90 as soon as the driver sits down. Standard features include four-zone automatic climate control and a panoramic sunroof. Any model with AWD comes with heated front seats, while T6 and Recharge models come standard with leather upholstery. Driver-seat memory settings, perfect for those who share driving responsibilities with at least one other person, are standard as well.

As always, going with a higher trim level will up comfort. Available are things such as a heated steering wheel and heated second-row seats. An air ionizer, which helps to filter the air in the cabin, is available as well. Ambient interior lighting is a fun and stylish feature that is also an option for select models of the 2021 XC90. The available Lounge package really takes things to the next level by adding a massage feature for the front seats and simulated suede headliners.

The XC90 dominates the competition when it comes to cargo space in a three-row luxury SUV. Behind the third-row, drivers are given 15.8 cubic feet. With just the third-row out of the way, cargo space increases to 41.8 cubic feet. Folding down the second and third rows means getting a truly impressive 85.7 cubic feet of space. Better still, all models come standard with a hands-free power liftgate.

Although no vehicle is perfect, it is pretty hard to find many flaws when it comes to the 2021 Volvo XC90. Those in the market for a three-row luxury SUV are going to want to see this one.

How to Calculate The Dealer Cost of a Volvo XC90:

Note: All Volvo XC90 MSRP, invoice and dealer cost dollar figures above are approximate amounts. Prices are subject to change without notice.