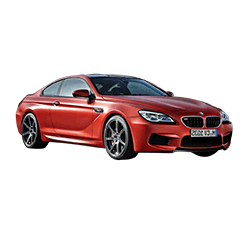 Should You Buy a 2016 BMW M6? Here Are Some Reasons For and Against

When it comes to building race-inspired automobiles, BMW remains near the top of the mountain. The 2016 BMW M6 is an awe-inspiring sports car that begs to be driven hard. An available Competition Package further transforms the M6 into a track-capable driving machine. Despite the car’s sporty intentions, it is still available with a long list of high-tech features. From the chiseled front-end to the muscular exhaust system, every aspect of the BMW M6 has been designed to enhance its sportiness.

The heartbeat of the 2016 BMW M6 is its ultra-potent engine. Fitted with a set of turbochargers, the V-8 engine is able to push out an exhilarating 560 horsepower and 500 pound-feet of torque. When accelerating on the road, there should only be a minimum amount of turbo lag. Although the official performance numbers have yet to be released, drivers can expect to be impressed.

BMW designed the 2016 M6 to appeal to sports car lovers. The M6’s distinctive BMW grille helps to set it apart from the other high-end sports sedans on the market. A set of high-performance wheels and tires accentuate the car’s wide stance. This is the type of vehicle that looks fast even when sitting still. However, the M6 still maintains a strong sense of elegance.

While the standard version of the M6 is thrilling, the Competition Package elevates the car’s performance capabilities. The engine will be tweaked to produce a bone-jarring 600 horsepower and 516 pound-feet of torque. Along with the extra power comes a stiffened suspension system that enhances the sedan’s handling. The Competition Package also includes an Active M Differential.

The 2016 BMW M6 is more than just a high-performance car. It is a driving machine that can draw a crowd of admirers. Whether the owner is cruising to a local car show or getting their ride detailed, they are bound to get plenty of compliments. In many instances, the M6 will be the king of the parking lot.

6) Available as a Coupe, Sedan, or Convertible

Prospective buyers can choose their M6 in the form of a sedan, coupe, or convertible. While the coupe is great for taking a trip to the beach, the coupe is perfect for weekend track warriors. Meanwhile, the sedan is a great option for the drivers who need to haul around their family and friends.

The GoPro video-camera integration feature enhances the car’s fun factor. Drivers will be able to record their entire journey. By connecting the GoPro camera to the M6’s infotainment system, the driver can easily make adjustments while on the road. Some of the available settings include Leisure Drive Facing Out and Sport Drive Facing Out.

There are plenty of exciting features available for the new BMW M6. In an effort to eliminate slammed doors, BMW offers an innovative feature that softly closes the doors. The cooled front seats will certainly come in handy on hot days. The car will also offer several other neat features, including a special Surround View camera and a crystal-clear audio system.

Owners of the 2016 BMW M6 can expect their ride to have a high resale value. As long as the car is kept in good condition, the vehicle will slowly depreciate in value. This is a major benefit for the M6 owners who plan to upgrade to a newer model in the future.

While the majority of M6 owners will stick to driving on the street, there are others who will take their ride to the track. When outfitted with the proper hardware, the M6 can be a great performer on a road course.

With a city fuel economy rating of only 14 mpg, the BMW M6 proves to be quite thirsty. This can be a problem for the drivers who must endure a lot of stop-and-go traffic.

The 2016 BMW M6 weighs over 4,000 pounds, which is greater than some of the other sports cars on the market. The M6's extra heft may cause some car shoppers to shy away from it.

Not only does the BMW M6 have an expensive price tag, but it is also expensive to maintain. Prices start at about $111,000. This is beyond the reach of most drivers.

Some of the direct competition includes the Audi S5, the Mercedes-Benz E-Class, and the Jaguar XK. Although all of these sports cars are formidable rivals, the BMW M6 is still able to hold its own. According to some car reviewers, the BMW M6 has the most comfortable ride.

There is no overlooking the BMW M6’s hefty price. However, most M6 owners are extremely satisfied with their purchase. The car’s high-tech features and stunning design make it a dream vehicle. Every driver will get addicted to the M6’s high-revving engine.