2014 Chevrolet Impala Pros vs Cons. Should You Buy? 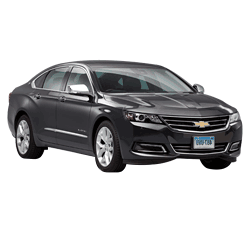 The Top 11 Reasons Why You May want to
Buy a 2014 Chevrolet Impala:

The new 2014 5-passenger Chevrolet Impala has been redesigned and is getting rave reviews for its facelift. Read on to see what we found. [ For the 2015 model see - Chevrolet Impala Pros and Cons ]

It is #1 for Affordable Large Cars, 2014’s Best Large Car for Families, and even Consumer Reports named it their Top-Rated Sedan. Available base packages for the Impala start from $27,025 to $35,304.

The dashboard gauge is a scrollable screen that can be accessed through the steering wheel. It displays the current speed zone and has the ability to set up a speed alert that beeps when the driver exceeds a manually entered limit.

More safety equipment is available than most of the other affordable large cars in its class. Not only does it offer a 10-airbag system as well as a navigation system, it also features OnStar with roadside assistance services and automatic crash response.
Other optional features include rear parking sensors, blind spot monitoring, a lane departure warning system, forward collision alert and a backup camera. Also available is optional intelligent cruise control with crash-imminent braking which will automatically brake if it detects a collision.

Road testers maintain that it shifts smoothly and quickly while keeping the handling balanced as well as the steering accurate. The Impala comes standard as a front-wheel drive with a 196-horsepower engine, 4-wheel antilock disc brakes and electronic stability control.

Reviewers unanimously agree that the biggest change for the year is the styling. The exterior has a redefined, stylish look that is much more aggressive. The interior has also undergone many changes: the modern soft-touch materials are much more upscale and of a higher quality. The bucket front seats are much more comfortable than years past, and there is quite a bit of back-seat passenger legroom (39.4 inches). Optional are the heated and ventilated leather seats.
The 2014 Chevrolet Impala comes in 5 trims: LS (base), 1LT, 2LT, 1LTZ, 2LTZ.

The Impala gets an 21 economical miles per gallon in the city and 31 on the highway.

There are many storage compartments throughout the 2014 Impala, including a hidden compartment (lockable via a passcode) behind the infotainment system in the dashboard. The trunk has 18.8 cubic feet of space (more than other comparable cars), and the split rear seats have a 60/40 folding capability to open up the cargo area for even more room.

The warranty available for the new Impala is comparatively better than other large sedans. It offers a 3-year/36,000-mile limited warranty and five-year/100,000-mile powertrain warranty.

Called the LS Eco, it comes with the eAssist hybrid system, dual-zone climate control and 18-inch alloy wheels, all starting at $29,945.

Road testers praised the new Impala for its quiet cabin, even under heavy throttle and faster speeds.
Although the 2014 Chevrolet Impala has made vast improvements, it is definitely not perfect. Read on to explore some of its downfalls.

Reasons Not To Buy - the Cons

The Chevrolet Impala, even with the optional V6 engine, is accused of not being an exciting drive.

One reviewer stated they were still able to feel manhole covers and bumps on the road.

Thought the interior design has been upgraded and better materials have been used, there are still flimsy plastics located on the center console.

The backseat has plenty of legroom plus the ability to slide down, however the cushions themselves ride rather low and the backrest is a steep incline.

MyLink infotainment system is a slick new tech feature for the new Impala, however some users stated that it doesn’t respond as quickly as they would like.

The backup camera is a useful safety tool, but it is not as crisp of a picture as it could be.

Although the 2014 Chevrolet Impala soars in other safety ratings, the rollover rating is only a 4 out of 5 stars.

There has been one safety recall from the NHTSA for the electrical system (specifically the exterior lighting). This was on 5/24/2013.

The reliability rating is also slightly lower at 4 stars instead of 5, although this is still rated as Better Than Most.
Whichever vehicle consumers decide to purchase, one thing is for certain: the 2014 Chevrolet Impala has certainly made some competitive upgrades.