2015 Chevrolet Cruze Pros vs Cons. Should You Buy? 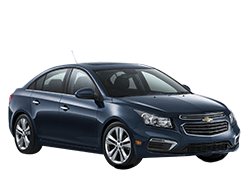 Should You Buy a 2015 Chevrolet Cruze? Here Are Some Reasons For and Against

Famously known for the classic two-seater Corvette and their sturdy pick-up trucks, Chevrolet is also a well-known contender in the market of compact cars. The company has made a mark in history as one of America’s top automakers. Now joining the ranks of the Toyota Corolla and the Hyundai Elantra, Chevy’s Cruze is an automobile to be reckoned with.

In addition, it is the first diesel fueled engine model Chevrolet has placed inside a passenger vehicle in 28 years. The Chevrolet Cruze boasts a clean, efficient diesel engine with 90 percent less emissions compared to previous diesels, but consumers still have the option of choosing an even more affordable 1.4-liter turbocharged vehicle.

Although it is not considered to be particularly sporty, the Cruze is ideal for a family of less than five. There have been some changes made to the 2015 Chevrolet Cruze. The 2015 models will be slightly longer. However, be aware of the fact that there seem to be more removals than additions. For starters, a couple of exterior color selections have been deleted as well as the premium 9-speaker Pioneer system. However, a voice-activated feature including Apple Siri integration and text message alerts have been added. Listed below are at least 10 reasons why you should buy a Chevrolet Cruze:

Ten Reasons to Buy a 2015 Chevrolet Cruse - The Pros

Not many brand new cars can be purchased with an average sticker price starting under $18, 000. Yet, you can count the Chevrolet Cruze in that number. Plus, their bumper-to-bumper warranty covers owners for three years or 36,000 miles while the Powertrain’s coverage extends to five years or 100,000 miles. Not a bad deal for a car that delivers fuel efficiency of around 45 miles per gallon for diesel and 42 miles per gallon for regular unleaded. Surely, that is enough to put a smile on anyone’s face.

Aside from the aforementioned voice-activated component, there are inclusions such as a 7-inch touch-screen display, USB ports and OnStar 4G LTE with a built-in Wi-Fi hotspot. The center console contains the trunk release controls and door lock switches. The ten air bags come as standard equipment. Rear park assist, rear cross traffic alert, a rearview camera and side blind zone alert are some of the other driver assistance features available. The infotainment system is very user-friendly. Drivers will appreciate the Bluetooth controls for phone and music streaming.

When in the market for a nice compact car, the Cruze has a no-nonsense, no-frills basic appeal. It is styled attractively and comes in an assortment of colors with complimentary interior combinations.

Even though it may not be real fancy compared to luxury cars, the Cruze has a cabin space comparable to many midsize sedans. For the most part, there rave reviews regarding the car’s generally smooth ride. The interior is best described as handsome and high-quality done on a budget.

All models of the Chevrolet Cruz come with stability control and antilock brakes, along with front knee and side impact airbags and full-length side curtains. Also included are child locks and an anti-theft alarm. The brakes are rated as good and the car has the capability of slowing down quickly even from triple digit speeds.

Surprisingly, the trunk space inside the Cruze is huge enough to accommodate a bumper crop, family luggage and a good amount of household items.

As a division of General Motors, Chevrolet has a history of being a name you can trust since 1911. The Cruze first launched in Japan in 2001 and has been a hit ever since. If sales are any indication, it may be worthy to note that in August 2014, sales for the Cruze reached a milestone of 3 million units sold worldwide.

To the car enthusiasts, the type of engine does matter. The Cruze diesel has a 2.0 liter turbocharged four-cylinder while the LS trim gets a 1.8-liter engine, also with four cylinders. As for the LT, LTZ and Eco, they come with a 1.4 liter four cylinder that is turbocharged.

Everyone loves fuel efficiency. For years, drivers looked to the Volkswagon Jetta TDI as the favored four-door sedan with a diesel engine. The VW Jetta TDI maintained high fuel-economy scores and top safety ratings as well. So how does the Cruze compare to the Jetta? When it comes mpg, the Jetta surpasses the Cruze with 30 miles per gallon in city driving. However, the Cruze tops the Jetta in highway driving with an impressive 42 miles per gallon. As for horsepower, both cars perform in a similar fashion. Nevertheless, the Cruze offers a lot more car for the money.

Some Reasons Not to Buy a Chevrolet Cruze - The Cons

For every pro there is usually a drawback, but the pros in this case seem to outweigh the cons in regards to the Cruze. A large number of drivers have taken into the consideration the size and cost of Chevrolet’s popular compact automobile and limited their complaints to:

• Bland styling and/or design.
• Low climate controls.
• Bumpy rides even at low speeds. There is a desire for better cushioning and stability against those bumps and jolts while driving or riding.
• Harsh diesel noise. However, the noise is relatively mild compared to most diesel vehicles.

Perhaps these are minor inconveniences when pondering cost and other factors. This is evident by the amount of Cruze compact cars you see along the highways and byways. Clearly, the Cruze is part of why Chevrolet is still “the heartbeat of America.”