2015 Chevrolet Malibu Pros vs Cons. Should You Buy? 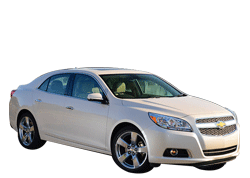 Should You Buy a 2015 Chevrolet Malibu? Here Are Some Reasons For and Against

The 2015 Chevrolet Malibu is a sedan that often ranks in the middle of the rankings of other cars of its type in many categories, but it still has many virtues that make it a desirable car for many. This car is stylish, safe, and luxurious and offers a variety of customizations that can make the riding and driving experience even better for the customer. While the 2015 Chevrolet Malibu does not generally blow reviewers away, there are still many reasons to buy one—and several reasons not to buy one.

Reasons to Buy a 2015 Chevrolet Malibu - The Pros

1. Safety first - and first in safety.

The 2015 Chevrolet Malibu is one of the safest cars on the market due to its 5-star safety rating by the NHTSA. This car features a plethora of airbags distributed throughout the car, a safety upgrades package with various alerts and warnings, and overall excellent crash protection. Those who value safety above all other considerations should definitely consider the 2015 Chevrolet Malibu.

The addition of 4G LTE connectivity to OnStar this year is an excellent addition that many customers will appreciate. This feature allows drivers to establish a WiFi connection in their vehicles in addition to being able to take advantage of high-speed cellular data service, which is a desirable trait for tech-savvy car owners.

People who are big on comfort—especially in the front row—will likely enjoy the 2015 Chevrolet Malibu’s soft-touch surfaces, tasteful interior design, and available leather upgrade. Metallic chrome highlights and blue ambient lighting give this car a more luxurious feel than some of its competitors.

The 2015 Chevrolet Malibu has three basic trim levels. The LS is the standard trim level and features most of the basics of a standard sedan plus 4G LTE and Bluetooth connectivity. The LT subtrim has 3 trim levels of its own; the 1LT adds such perks as leatherette upholstery, a MyLink infotainment system, and satellite radio. The 2LT adds larger wheels, foglamps, automatic climate control, etc. The 3LT is identical to the 2LT except it adds a turbocharged engine. The LTZ features 1 and 2 LTZ; 1LTZ adds heated, 8-way powered, leather seats while 2LTZ adds the turbocharged engine as well as a sunroof.

Customers can choose between the standard 196-horsepower, four-cylinder, 2.5 liter engine and the turbocharged 2.0 liter engine that boasts 259 horsepower. Gas mileage is a respectable 25/36 mpg that puts it on par with its competitors.

In terms of drivability, the Chevrolet Malibu is reliable and solid if not flashy. It drives well, corners well, and handles well; it gets a person reliably from point A to point B.

The trunk of a 2015 Chevrolet Malibu is larger than that of the average sedan to the tune of 16.3 cubic feet. This is ideal for people who generally tote large amounts of groceries, equipment, etc. in their trunks.

The Chevy Malibu has several features that reduce overall gas usage. The stop/start control shuts the engine off automatically when it is idling in order to conserve fuel. The front-end shutters are aerodynamic and the tires have lower rolling resistance.

Acceleration is not a problem with the 2015 Chevrolet Malibu as it receives good ratings from critics in that regard. Although both available engines are only 4-cylinders, the turbocharged engine in particular can come close to matching some 6-cylinder engines. Shifting and lane-changing are also good in the Chevy Malibu.

Not only is the interior of the car luxurious, but the car’s cabin is quiet as well. Most road and wind noises are successfully blocked out, and this is truly one of the quietest Chevrolet Malibus ever made.

Reasons to Not Buy a 2015 Chevrolet Malibu - The Cons

1. One fairly frequent complaint about the Chevorlet Malibu is its lack of legroom in the back seat area. Front-seat legroom is adequate if not roomy, but people—especially those who have long legs—may find the backseat cramped and uncomfortable.

2. Those who want distinctive-looking cars designed to turn heads will probably want to look elsewhere since the Chevrolet Malibu is a nice-looking but not particularly flashy car.

3. Those who want “fun” cars to drive may want to consider other options as the Malibu is a reliable but not particularly “fun” car to drive. While this is a reliable car, it is not a vehicle that people are going to rave about having driven to their friends.

4. Some consumers do not like the start/stop feature that cuts the engine off when the car is idling in order to save gas. Complaints are that the feeling is disconcerting, uncomfortable, and noticeable to a greater degree than is advertised.

“US News and World Report” ranks the 2015 Chevrolet Malibu at 15 out of 21 affordable midsize cars. Many of its features are competitive with those around it, and the safety features and interior are superior to those of many of its competitors. The Malibu loses ground, however, in terms of backseat comfort, distinctive design, and fun drivability. Toyota, Honda, Hyundai, and Ford all have multiple models of affordable midsize cars that rank ahead of the 2015 Chevrolet Malibu overall.

Those who value safety features and a luxurious interior will likely enjoy the features found in the 2015 Chevrolet Malibu. This car also features good technological upgrades, a variety of trim levels from which to choose, and a choice of two good-quality 4-cylinder engines. It is solid, reliable, and offers a fairly smooth and quiet ride. The biggest criticisms of the 2015 Chevy Malibu are its lack of backseat legroom, its pedestrian exterior, and its reliable but not “fun” drivability. The Chevy Malibu is a solid and competitive if not extraordinary affordable midsize sedan that should be at least considered if not ultimately chosen.