2014 Dodge Charger Pros vs Cons. Should You Buy? 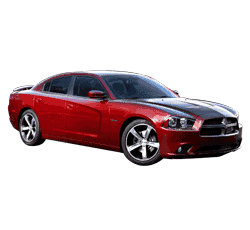 The 2014 Dodge Charger is nearly flawless. It looks like a traditional muscle car and performs the part with amazing agility, acceleration, handling and that all important “fun factor”. Aside from being a nice piece of eye candy and a blast to drive, the '14 Charger also functions as a full size sedan with ample interior space. It is offered in the following trims: SE, SXT, R/T, SRT8 and the Super Bee.

The Charger's competitors include the Chevrolet Impala, the Toyota Avalon and the Kia Cadenza. The Impala doesn't compare to the Charger's eye catching curves and sporty style but does have plenty of seating and cargo space as well as an array of high tech features. The Avalon is an interesting competitor as it has a hybrid option that attains 40 mpg, yet it pales in comparison to the Charger's beastly engine and muscular aesthetic. The Cadenza is much more luxurious than prospective buyers would expect but it lacks the pizazz and powerful performance of the Charger.

Like the '13 edition of the Charger, the '14 hasn't changed much. There's a Redline Package that provides aluminum wheels with black chrome and a 6 cylinder, 3.6 liter engine with 300 horses. A Wheel Sport Appearance Group is also available and several new exterior paints can be selected. They are Header Orange, Plum Crazy and TorRed.


1) The Charger's unmistakable style is one of its best features. It has a characteristic bar of 164 LED taillights, a cross hair style front grille, sharp angles, a lifted belt line, a spoiler and curves that are more muscular than sexy. It looks perfect.

3) The price is outstanding. While the Charger looks like a luxurious sports vehicle, the SE starts at under $27,000. That is quite shocking considering everything that the car has to offer.

4) It is loaded with features like remote keyless entry, a USB audio auxiliary jack, 3 power accessory outlets, a driver's seat that is powered in 6 ways and much more.
The Charger handles similar to a Nascar race car. Although it is big, it is easy to control and has a powerful engine under the hood.

5) The Charger brakes better than expected. During Edmunds testing, a Charger SXT stopped from 60 mph in merely 113 feet. This is an incredibly short braking distance for a full size sedan.

8) Although rear wheel drive is standard and provides excellent performance, snow belt drivers will be happy to know that Dodge also empowers buyers to choose an all wheel drive system if they desire.

10) The Charger's interior is surprisingly luxurious. It is composed of high quality materials compared to earlier editions of the Charger. The center stack is perfectly positioned and shifted a bit towards the driver for optimal viewing and control.

Reasons you may not want to buy a 2014 Dodge Charger

1) Some Charger drivers complain that rear visibility is a bit limited.

2) Compared to other full size sedans, the Charger's rear seat legroom is lacking.

3) While Chargers equipped with an 8 speed automatic transmission and a 6 cylinder engine attain 31 mpg on highways, the 6 cylinder base Charger SE and Chargers with 8 cylinder engines deliver an unimpressive 18/27 mpg on city and highway roads, respectively. The SRT8 is even worse with 14/23 mpg.

5) Compared to other full size sedans, the Charger's trunk is a bit small, coming in at 15.4 cubic feet in volume.

6) The Chargers equipped with 8 cylinder engines are tied to five speed automatic transmissions. Gear heads would have preferred the option of a manual transmission with their V8s.

7) Some Charger drivers complain that Chargers equipped with 8 cylinder engines have inferior ride quality compared to 6 cylinder Chargers. They complain that the ride is a bit louder and bumpier.

While there are some shortcomings listed above, these should not be what car buyers focus in on when examining the '14 Charger. Without a doubt, the Charger is one of the best cars on the American market. It play dual roles, serving the family as a spacious station wagon-esque sedan while offering automotive enthusiasts a driving experience that is hard to match. This year's Charger is an incredible value with a starting MSRP under the $30,000 level. Buy it.