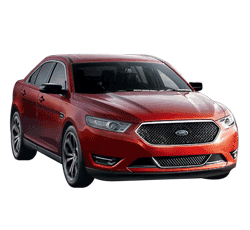 The 2014 Ford Taurus is the Perfect Family Sedan
The 2014 Ford Taurus is the newest addition to Ford’s long-lived line of family oriented, full-size sedans. The Taurus was given a complete makeover in 2010, giving a great new look and adding a wealth of new options in terms of available engines and features. That redesign was refreshed in 2013 with even more features and a variety of interior improvements, giving the affordable model an improved luxury feel. 2014 brings even more available options, and while critics have pointed to a few areas that are still in need of minor improvements, its safety and reliability are second to none. Here are the top 10 reasons to own a 2014 Ford Taurus, as well as a look at what the critics are saying. [ For the 2015 model see - Ford Taurus Pros and Cons ]

The 2014 Ford Taurus is available in three different engine configurations. Its base engine is a powerful, 288-horsepower, 3.5L Ti-VCT V6 engine. Its twin independent variable camshaft timing (where the Ti-VCT comes from) enhances performance and fuel economy with precise valve control and variable valve overlap.

The Taurus is also available with a turbocharged 2.0L 4-cylinder EcoBoost engine. This option still provides plenty of muscle, and comes with an improved fuel efficiency rating.

Ford’s engineers have masterfully designed the Ford Taurus with a wide, assertive stance to provide a comfortable ride while maintaining a superb grip on the road. Large sedans can sometimes be difficult to handle, as their weight and size lend themselves to body roll and sometimes awkward weight distribution. Not so in the Taurus – both front-wheel drive and all-wheel drive Taurus models can maintain their poise through the corners and effectively utilize the weight of the car to keep a firm and balanced grip on the road. The confident stance of the Taurus helps to provide superior braking as well, despite the weight of the car.

The 2014 Ford Taurus earns competitive fuel efficiency ratings for its class, including the muscular SHO. The base SE trim with the 3.5L Ti-VCT V6 engine, as well as the SEL and Limited trims earn estimated fuel efficiency ratings of up to 19 city / 29 highway miles per gallon. The SHO trim, which includes the more powerful 3.5L EcoBoost V6, earns an estimated 17 city / 25 highway miles per gallon.

The interior of the Ford Taurus utilizes superior materials, intelligent design, and an abundance of available features to provide its owners with a sophisticated and luxurious feel in the affordable large sedan. The advanced instrument cluster provides a wealth of options that allow the driver to view and control a large number of the vehicle’s systems. Combined with available options like heated and cooled multicontour front seats with Active Motion technology to provide exceptional comfort and support, heated rear seats, audio system upgrades and ambient lighting, there’s no aspect of the Taurus’ interior that doesn’t work to bolster its luxury appeal.

The Taurus has plenty of cargo space with a wide, deep trunk that clocks in at 20.1 cubic feet. Owners don’t even have to take their golf bags out of the trunk when they need to bring home groceries, and even then they’re likely to be left with room to spare. The Taurus limited even includes 60/40 split rear seats, offering flexible options that can create impressive storage capacity while still carrying passengers.

The 2014 Ford Taurus comes with a long list of available options that gives buyers the ability to customize the car to their specific needs and budgets. The Intelligent Access with push-button start option allows for quick and convenient keyless entry and ignition. Available adaptive cruise control uses sensors to monitor and adapt to the speed of vehicles ahead, and the forward collision warning with brake support works to prevent collisions using audio and visual warnings combined with braking assistance.

Other available options include Ford’s Blind Spot Information System (BLIS) to alert the driver to surrounding traffic using a visual display on the side mirror, and the lane-keeping system vibrates the steering wheel to simulate a rumble strip when it detects unintended lane departure. But the 2014 Ford Taurus doesn’t stop there, and even offers active park assist to make parallel parking a breeze.

7) Sync with MyFord or MyFord Touch

The Ford Taurus’ entertainment system is also customizable, with available infotainment consoles that can include voice-activation technology to allow for easy and distraction-free access to various features like hands-free calling, wireless audio streaming, audible text messages and more. The 8-inch color LCD touch screen provides access to a variety of vehicle systems. The world is just a touch away when it’s combined with integrated Bluetooth technology and the SYNC Services system, offering news, sports scores and stock quotes, just to name a few. Even better, a screen on the instrument cluster can keep it all within the driver’s sight of the road.

The Ford Taurus has long been known as an extremely safe and reliable vehicle, combing both active and passive safety systems to the prevent accidents and, if they should occur, keep all of the occupants safe from harm. The 2014 Ford Taurus has earned a 5-Star Overall Rating from the National Highway Traffic Safety Administration, which uses a variety of tests to accurately assess a vehicle’s ability to prevent collisions, perform avoidance maneuvers, and mitigate injuries. Available features in the 2014 Taurus like the new lane departure warning system help to further increase the overall safety of the vehicle.

MyKey technology is standard on every 2014 Ford Taurus, providing owners with the ability to let others drive the car with reliable limitations in place. The system is perfect for owners with driving teenagers, as it has the capability to limit the speed of the car, as well as the volume of the audio. In addition, it displays warnings when seat belts aren’t buckled and when the fuel level is low.

Ford offers a vast range of pricing options with the Taurus, giving buyers the ability to work within a variety of prices and choose the best pricing level for their needs. The MSRP of a new, 2014 Ford Taurus ranges from a base of $26,780 up to a high end of $39,980, with price points within the range that are suitable for various trims and optional accessories. In addition, Ford offers a number of payment and financing options, further widening the potential market for the Taurus.

The 2014 Ford Taurus is an exceptionally versatile vehicle, providing buyers with options that keep everyone in the family happy. While the 2010 redesign and the 2013 refresh brought about significant changes and upgrades to the Taurus, critics have pointed out a few areas in which it could still use a bit of improvement.

Some owners have complained that the MyFord and MyFord Touch infotainment systems have a learning curve that’s a bit above that of the systems found in competing models. For example, like the 2014 Chevrolet Impala has a system that’s a bit slower than the Taurus’, but more user-friendly in its design.

The flexibility of the Taurus’ vast array of available options means that it comes with relatively few standard features. Competition like the 2014 Toyota Avalon offers more standard features than the 2014 Ford Taurus; however, its price range is also more limited than the Taurus’, and starts out at a higher base MSRP.

Large sedans often have sluggish steering and tend to sway when cornering. The 2014 Ford Taurus has reactive steering and a stance that limits body roll in turns, but some drivers feel that the stance makes it feel like it’s lumbering through turns. These drivers prefer the lighter feel of competition like the 2014 Dodge Charger.

Overall, the 2014 Ford Taurus looks and performs better than ever while retaining its widespread appeal as a reliable, family-friendly automobile. The upgraded interior and improved styling are attractive to many buyers, and the large number of available features serves to enhance its appeal as well as its versatility when it comes to pricing options. The Taurus is, as always, the perfect family sedan.