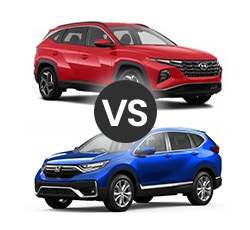 This year, many people will be shopping for a new small SUV. The 2022 Hyundai Tucson and the 2022 Honda CR-V prove to be great picks. They are both affordable, modern, and spacious enough to satisfy the average family.

For the 2022 model year, the Tucson has been fully redesigned from the inside out. It has definitely gained ground on the competition. Not only does the latest model have a bolder-looking exterior design, but it also offers some cool new features. Increased passenger room makes the overhauled Tucson more satisfying.

No notable changes were made to the 2022 Honda CR-V. However, this SUV’s lack of updates shouldn’t turn away any buyers. It was already one of the highest-rated models in the segment.

For some people, choosing between the 2022 Hyundai Tucson and the 2022 Honda CR-V will be a tough chore. In this head-to-head assessment, we’ll find out which one of these vehicles is the better option.

Hyundai offers the all-new Tucson with three different powertrains. Buyers who’re looking to keep costs low will be interested in the standard four-cylinder engine, which generates an adequate 187 horsepower. Power is routed to the wheels through a conventional automatic transmission.

Testers should not expect the Tucson’s base powertrain to deliver a thrilling drive. The SUV's 0-60 mph time of around 9.3 seconds is a bit pokey for the class. However, Hyundai’s eight-speed automatic transmission does help enhance responsiveness. While the Tucson may feel a touch sluggish when merging onto the highway, most drivers will be pleased with its performance in city traffic.

Performance noticeably improves with the Tucson’s available hybrid powertrain, which combines a turbo four-cylinder engine with an electric motor. Output rises to 227 horsepower. A six-speed automatic transmission comes standard. With a 0-60 mph time of about 7.3 seconds, the Tucson Hybrid is significantly quicker.

Another option is the Tucson’s plug-in hybrid powertrain. It uses the same turbo four-cylinder engine. However, production increases to 261 horsepower. Despite its higher output, the plug-in hybrid Tucson doesn’t accelerate any quicker than the standard hybrid model.

The Honda CR-V’s standard turbocharged engine has a decent punch. It manages to push out 190 horsepower. Road tests show the CR-V hustles to 60 mph in around 8.2 seconds. Tucson trims equipped with the Hyundai’s base engine certainly don’t accelerate as swiftly. Car reviewers also rave the CT-V’s continuous variable transmission, which operates smoothly without any awkwardness.

A four-cylinder hybrid powertrain is also offered on the Honda CR-V. Honda rates it to generate a total of 212 horsepower. Road tests show the CR-V Hybrid is capable of recording a 0-60 mph time of 7.5 seconds. Drivers will be able to easily jolt pass traffic when needed.

While neither of these crossover SUVs are made for heavy-duty towing, the 2022 Hyundai Tucson is more suitable for pulling a load. Hyundai lists the Tucson with a maximum tow rating of 2,000 pounds. By comparison, the CR-V’s towing capacity is 500 pounds lower.

When equipped with its base engine, the CR-V has a fuel economy rating of 28 mpg town/34 mpg freeway. Chossing the AWD package slightly lowers this rating to 27 mpg tonw/32 mpg freeway. Drivers who choose the CR-V’s hybrid powertrain can expect to get up to 40 mpg in town and 35 mpg on the open rod. Regular gasoline is the SUV’s recommended fuel type.

All-wheel drive enables these crossovers to offer a commendable performance in the snow. Unfortunately, neither the CR-V nor the Tucson is a great choice for off-roading. Adventurous features, such as heavy-duty skid plates and trail-rated shock absorbers, are not offered. Outdoor lovers should stick to traveling on basic camping trails.

Drivers will appreciate how well the Hyundai Tucson brakes during emergencies. When braking from 60 mph, it takes the Tucson roughly 118 feet to come to a complete halt. Fortunately, the Honda CR-V’s braking system is just as effective. A 60-0 mph stopping distance of 119 feet puts the CR-V right on par with the Tucson.

The CR-V has a track record of being dependable. Experts give the latest model an above-average reliability rating. Car shoppers who pick the new Tucson can also look forward to experiencing good long-term reliability. Its predicted reliability rating is just as impressive. These SUVs also have a similar average annual repair cost.

The all-new 2022 Hyundai Tucson’s driving character is best described as smooth and confident. Although this crossover isn’t very sporty, it handles better than before. Many people will enjoy the Tucson’s direct steering.

Expect the 2022 Honda CR-V to be slightly more agile. Its steering and handling rank among the best in the class. Drivers can expect the CR-V’s body to remain surprisingly stable when traveling on twisty roads.

One of the Tucson’s best qualities is its superb comfort. Even on rather rough roads, this crossover’s ride is supple. Families can look forward to enjoying a relaxing cruise. Passengers in the CR-V will also experience a rather plush ride. Like the Tucson, the CR-V manages to effectively absorb bumpy pavement.

When designing the Tucson’s cabin, Hyundai did a fine job of creating a quiet atmosphere. From a standpoint of minimizing outside, the Tucson now stands among the segment leaders. At times, it feels as if you’re riding in a more luxurious model. The CR-V has these same attributes. Even when equipped with larger 19-inch allow wheels, Honda’s top-selling crossover manages to keep road noise to a minimum.

These models provide a similar amount of front legroom. Even taller drivers will be able to get comfortable behind the wheel. However, there’s nearly an extra inch of legroom in the Tucson’s second row.

The CR-V can be equipped with heated front seats. However, only the Tucson offers ventilated front seats. Heated rear seats are also exclusively available in the Tucson. This could be a key factor for drivers who seek more luxury. both vehicles offer dual-zone automatic climate control, some reviewers have found that the CR-V’s system can have trouble maintaining a precise temperature.

When it comes to cargo space, these vehicles are neck and neck. Although the CR-V may offer an extra 0.5 cubic feet of cargo space, it’s hard to notice a difference in the real world. Both SUVs are capable of hauling a family’s extra gear. However, Hyuandi's available hands-free smart liftgate takes less effort to use. Unlike the CR-V's system, it does not require you to kick upward.

According to some test drivers, the Honda CR-V’s outward visibility is a bit comprised at times. This is especially true when looking to the rear. Expect visibility out of the Tucson’s side windows to be a tad better.

Unfortunately, the CR-V’s standard infotainment system is behind the times. To get Honda’s more modern Display Audio infotainment system, buyers must jump past the base model. It brings a larger 7.0-inch touchscreen with advanced smartphone pairing. Easy operation makes this interface even more satisfying.

Automotive journalists rave about the performance of the Tucson’s infotainment system. Its standard 8.0-inch touchscreen displays sharp graphics, which are easy to read. Hyundai’s new voice recognition technology is exceptional. Drivers will have the ability to make several commands using natural language. Although Tucson buyers can upgrade to a 10.25-inch HD touchscreen, it’s not as user-friendly.

Families will appreciate the Tucson’s IIHS Top Safety Pick+ award. It receives good marks in all the organization’s impact tests. To no surprise, the 2022 Honda CR-V was also named a Top Safety Pick+.

Sought-after safety features, such as automatic emergency braking and active lane-keeping technology, come standard on the CR-V. However, the Tucson goes a step further by adding driver drowsiness monitoring and rear-seat reminder to its list of standard equipment.

While the CR-V offers blind-spot monitoring, it’s not as advanced as the Tucson’s available blind-spot camera system. Drivers will be able to actually see vehicles approaching from the rear on the infotainment screen. A surround-view camera system is also offered on the Tucson, which helps lower the driver’s stress levels when parking. CR-V buyers must settle for a traditional backup camera.

Prices for the 2022 Hyundai Tucson start at slightly less than $25,000. Meanwhile, Honda lists the base CR-V with a starting MSRP of around $26,800. In terms of overall value, the Tucson nudges by the CR-V. Not only is the entry-level Tucson more affordable, but it also provides a better collection of standard equipment. Furthermore, car shoppers should factor in the Tucson’s much longer warranty.

For years, the Honda CR-V has been one of the top models in the small SUV segment. It reamins a highly recommended vehicle for families. However, a long list of improvements helps make the redesigned 2022 Hyundai Tucson just as rewarding. Some car reviewers even consider the Tucson to be the better vehicle.

The Tucson’s outstanding value will appeal to a lot of people. Aside from its extra-long warranty, this crossover also comes loaded with an impressive list of standard features. A plush ride and comfy seating further highlight the Tucson as a relaxing family hauler. Certain nicities are only offered on the Tucson, including ventilated front seats and a surround-view camera system.

While the new Tucson proves to be a great pick, it does lose to the 2022 Honda CR-V in certain categories. Performance with the Tucson’s base engine is a bit on the sluggish side. Honda’s standard powertrain has noticeably more zip.