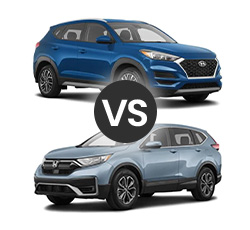 The 2021 Hyundai Tucson and Honda CR-V have a lot of things in common. To the average customer, they're both seen as practical vehicles because of their size, capability, and affordability. These SUVs have many modern features that people are sure to appreciate.

It's great that the Hyundai and Honda companies have so much competition in a busy market, since this means that customers will benefit from advancements in the field. The two vehicles are similar in several ways, so it might be hard for someone to determine which would be the more strategic purchase. The intent of this overview is to provide enough information so that buyers can decide which model would be better for them.

There are six trims of the Hyundai Tucson, and there are two available engines. The first two trims run on 2.0-liter, four-cylinder engines that generate 161 horsepower and 150 pound-feet of torque. These numbers aren't bad, but the other trims have more capability and will likely be able to attract more attention because of this. The top four trims use 2.4-liter, four-cylinder engines. These larger engines have 181 horsepower and 175 pound-feet of torque, and they can tow up to 2,000 pounds. The standard engine has a towing capacity of 1,500 pounds.

The four trims of the Honda CR-V all use four-cylinder engines, too. One of these engines has a displacement of 1.5 liters, so it might initially seem like these would be weaker than a Tucson engine. This would make sense, until the turbocharger is taken into account. Because the CR-V is powered by a turbocharged engine, it has a good amount of power. It comes with 190 horsepower and 179 pound-feet of torque. When properly equipped, this SUV can tow up to 1,500 pounds.

Now, there's also another type of CR-V available. This Honda SUV can run on a hybrid powertrain as well as a standard one. The EX, EX-L, and Touring trims, which are the top three trims, are all available as hybrids. A hybrid model uses a 2.0-liter engine along with an electric motor, and it might surprise people with what it can do. Out of all of these available powertrains, it's actually the most powerful one. It has a net horsepower of 212.

With either model, all-wheel drive is available. Both have a similar type of all-wheel-drive system. It would be ready to act at any moment in case there's an issue with traction. If so, power could be redirected to the wheels that can best utilize it. The default powertrain in both SUVS is a front-wheel-drive system, with the exception being that the hybrid CR-V comes standard with all-wheel drive.

In the Tucson, there's a six-speed automatic transmission with SHIFTRONIC. SHIFRTRONIC is a feature that allows drivers to manually shift when they prefer to. Another element that they can use is Drive Mode Select. There's a normal mode that would be used by most people, most of the time. The other modes are Eco and Sport.

These SUVs drive kind of like sedans do. This isn't meant to be a criticism at all, but rather a way to describe how easy it is to handle them. They have enough horsepower so that they feel responsive and athletic, but they still seem nimble and agile.

The Honda CR-V has a few things that people will enjoy. The top three trims have remote start, and every model has Active Noise Cancellation so that their cabins can be quiet and peaceful. Hill Start Assist is another convenient feature. If the SUV is stopped on a slope, facing uphill, the driver can engage Hill Start Assist to hold pressure on the brakes. This prevents the vehicle from rolling backwards before the driver can put his/her foot on the gas pedal.

The size of these vehicles is ideal for many customers. The Tucson measures 176.4 inches from one end to the other. With a length of 182.1 inches, the CR-V is a bit longer. Out of the two models, the CR-V is also the wider and taller SUV, by slim margins. These vehicles shouldn't be difficult to maneuver around any urban areas.

Inside the cabin, there is room for five passengers in both models. The Hyundai Tucson feels fairly spacious, with 41.5 and 38.2 inches of leg room in the first and second rows, respectively. Behind the seats, there's a cargo area that has a volume of 31 cubic feet. If the rear seats are folded down, maximum cargo capacity is 61.9 cubic feet.

There's even more space in the Honda CR-V. It has nearly the same amount of front row leg room as the Tucson does, but in the back seat, there is 40.4 inches of leg room. Its rear cargo area has a volume of 39.2 cubic feet, and the space can be expanded to 75.8 cubic feet by lowering the rear seats. Note that hybrids have a little less interior space because they need to accommodate more mechanical components.

In terms of technology, there's a lot for customers to think about. The base model of the Tucson has a seven-inch touchscreen with Android Auto, Apple CarPlay, and Bluetooth. The mid-level trims have the addition of SiriusXM, HD Radio, and Blue Link Connected Car technology. Select models have wireless charging, second-row USB outlets in addition to the standard front-row USB outlets, and Infinity Audio systems. The most premium trim has an eight-inch touchscreen with built-in navigation.

Given how much people rely on technology these days, it's interesting that Honda choose not to give the LX, which is the entry-level CR-V trim, a touchscreen. Instead, it has a five-inch LCD screen. It doesn't have smartphone compatibility either, but it does have Bluetooth and one USB port.

All the other trims have two front USB ports, HD Radio, SiriusXM Satellite Radio, Apple CarPlay, Android Auto, HondaLink technology, and seven-inch touchscreens. The most premium trim has navigation and a premium audio system, along with wireless charging.

Modern vehicles have many impressive safety components. Customers will be pleased that Hyundai and Honda have incorporated driver-assist technologies into these two models.

In the Hyundai Tucson, every trim has forward collision-avoidance assist, lane keeping assist, and driver attention warning. Except for the base model, the trims have blind spot and rear cross-traffic collision warning, too. The top two trims have surround view monitors, and the most sophisticated model has pedestrian detection built into its forward collision-avoidance assist program. That top-level trim also has smart cruise control, which gives the SUV the ability to adjust its speed to stay a safe distance behind the vehicle in front of it.

In the Honda CR-V, there are some similar elements. Like the Tucson, the CR-V has lane keeping assist, forward collision warning and automatic emergency braking. This means that it can warn drivers when they're veering out of position and help them correct their steering, and it can reduce the chances of frontal collisions. The top three trims of the CR-V have blind spot and rear cross-traffic monitoring, just like what the Tucson has.

There are a few minor differences in these areas. First, every CR-V trim has automatic high beams. In contrast, only the top trim of the Tucson has this feature. Automatic high beams can be useful when traveling outside the city, as they can turn themselves on and off depending on whether other lights are detected. Further, every Honda CR-V has adaptive cruise control, but this is only found in the Ultimate trim of the Tucson. However, the Tucson is the model that has a 360-degree camera.

These prices are all comparable to each other, and it's nice that there are a range of options for people to consider. The base models are relatively affordable, but they have basic features like cloth seats and manually adjustable front seats, and the CR-V LX doesn't even have smartphone compatibility.

Mid-level trims in both models are going to offer many more advantages. Features like heated front seats, power-adjustable driver's seats, smart entry, and heated side mirrors all become standard. Most of the CR-V trims have power sunroofs, but only the top trim of the Tucson has a sunroof. On the other hand, the CR-V is limited to a power tailgate, while the Tucson has an available hands-free smart liftgate.

There are some key ways in which these vehicles are distinct from each other. The Honda CR-V will appeal to those who value performance, efficiency, and spaciousness. These are some qualities that popular SUVs are known for. People looking for traditional SUVs that are going to be ready to take them on adventures and have room for all of their passengers and/or gear are going to be very satisfied with the CR-V.

The Tucson has a respectable amount of power, but it just doesn't quite measure up against the CR-V in terms of horsepower and cargo space. Plus, it doesn't even have a hybrid version for 2021. (A hybrid Tucson is coming in the near future, though.)

What the Tucson has is a more modern feel with more high-tech components. Every one of its trims has touchscreens, and the Ultimate trim has a 360-degree camera. It also has heated and ventilated front seats that some buyers may find appealing.

From a price standpoint, there's little that separates the Hyundai Tucson and Honda CR-V. The decision will come down to whether a consumer wants the CR-V, an SUV that has proven to be reliable for decades and will be quite durable and efficient, or the Tucson, which has a more youthful feel with more innovations to take advantage of.