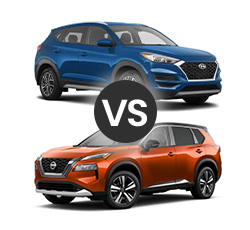 Two-row SUVs are very popular these days, and it makes sense, given their size, versatility, and capability. The 2021 Hyundai Tucson and Nissan Rogue are both solid options if anyone is interested in getting a new two-row SUV. They're especially going to be intriguing choices because of their affordable prices and modern technology.

Whereas the Nissan Rogue has one available engine, the Hyundai Tucson has two. The Tucson comes in six trims, and the first two trims use 2.0-liter engines. The others all have slightly larger engines that have displacements of 2.4 liters. Both versions have inline four-cylinder designs. The smaller engine is able to generate 161 horsepower and 150 pound-feet of torque, and the larger one comes with 181 horsepower and 175 pound-feet of torque.

In all four trims of the Nissan Rogue, there's a 2.5-liter, four-cylinder engine. It matches the 2.4-liter engine of the Tucson with 181 horsepower, and it has 181 pound-feet of torque.

Every Rogue and Tucson trim comes with the option to get all-wheel drive. Otherwise, there would be front-wheel drive. The all-wheel-drive systems in these SUVs are similar to each other. They can sense when traction is an issue, and if so, they can redirect power to the wheels that can use it the most. This prevents a situation in which the front wheels just continue to spin and spin without making any meaningful contact with the surface of the road or trail.

The Rogue has Snow and Off-Road modes that drivers can select if they'd like to optimize performance when the conditions are challenging. (These are only available if the SUV has all-wheel drive.) The other drive modes in the Nissan are Eco and Sport modes. The Tucson has drive modes as well, but those modes are limited to Normal, Eco, and Sport. With both models, the Sport mode would be selected if anyone wants the engine to be more responsive and quicker to accelerate, and the Eco mode would do the opposite in order to save gasoline.

The Nissan Rogue is going to appeal more to consumers who are concerned about their fuel consumption. A front-wheel Rogue can achieve up to 27/35 (city/highway) miles per gallon, and an all-wheel version of the SUV has an estimated fuel economy of 26/33 miles per gallon.

Nissan has chosen to give the Rogue an Xtronic continuously variable transmission. It makes the SUV drive smoothly, and there is a manual mode and paddle shifters in case people want to take more control over shifting. The Tucson has something similar called SHIFTRONIC. This feature allows a driver to manually shift whenever he/she would like to. The Tucson uses a six-speed automatic transmission.

Most people would be satisfied with how the Tucson and Rogue handle themselves. It's true that they're far from being the quickest vehicles in the market, but they can do just fine in almost every situation that the average driver would be dealing with. These SUVs should be perfectly suited for commuting, road trips, and the occasional excursion off of paved paths. Of course, having all-wheel drive would improve drivability if anyone lives in a colder climate or frequently deals with dirt roads and slippery surfaces.

Cargo room is always going to be of importance in an SUV. After all, many people are attracted to SUVs mainly because of their cargo capacities. The Hyundai Tucson has 31 cubic feet of space behind its seating area, and that cargo capacity can be expanded to nearly 62 cubic feet when the rear seats are folded down. The Nissan Rogue does even better in this regard. It has 36.5 cubic feet of space in the back, and when the rear seat has been lowered, it has a maximum cargo capacity that's just over 74 cubic feet. A difference of over ten cubic feet could be a big deal to some prospective buyers, especially those that may often be loading up their SUVs with sports equipment, bulky items, or other types of gear.

Aside from space, there are other factors that can affect the driving experience. Anyone who's been checking out new vehicles lately would know that technology now plays a major role when driving. Fortunately, the Hyundai and Nissan companies have worked hard to incorporate advanced systems in their vehicles.

The Hyundai Tucson can have either a seven- or eight-inch touchscreen. The first trim has a seven-inch touchscreen with Android Auto, Apple CarPlay, and Bluetooth. On the second trim available, HD Radio and SiriusXM Satellite Radio become standard, and there's a Blue Link Connected Car System. Wireless charging and an Infinity Audio system become standard on the Sport trim, which is where the top half of the lineup begins. The Ultimate trim, which is the top-of-the-line Tucson, has an eight-inch touchscreen with navigation.

Nissan has started the Rogue out with an eight-inch touchscreen. It comes with Bluetooth, Android Auto, and SiriusXM Satellite Radio. It's interesting that the Rogue has SiriusXM as a standard component but doesn't have Apple CarPlay in all of its trims. Apple CarPlay is an option on the third trim, which is the SL, and it's standard on the top-level Platinum trim. The Platinum also has a nine-inch touchscreen, integrated navigation, a head-up display, wireless charging, and a Bose premium audio system. Plus, the top three trims can act as Wi-Fi hotspots.

Just like technology is able to keep people entertained and connected when they're traveling, it's also able to keep people safe. In recent years, many more vehicles have started to incorporate driver-assist technology into their safety packages. This type of safety feature is extremely advanced because it can constantly keep an eye out for potential issues. If a problem is detected, a vehicle can send out a warning to the driver, and it can potentially take corrective measures as well. It can be so reassuring to know that one's vehicle can be actively protecting him or her from danger.

Hyundai has built a few driver-assist systems into the base model of its Tucson SUV. The SE trim, which is the entry-level model, has driver attention warning, lane keeping assist, and forward collision-avoidance assist. This last system can monitor the situation as well as mitigate it by applying pressure to the brakes, if this is deemed necessary to avoid an accident. The highest trim can detect the presence of pedestrians in addition to vehicles that the Tucson may be quickly approaching. Most trims have blind spot and rear cross-traffic warning, and the top two trims have 360-degree cameras.

The base model of the Nissan Rogue has intelligent forward collision warning and automatic emergency braking with pedestrian detection. It has lane departure warning, too, so that drivers can be alerted when they're accidentally drifting out of their lanes. Notably, the Rogue's base model has standard blind spot monitoring, rear cross traffic alert, a rear sonar system to help with parking, and rear automatic braking. These can all greatly reduce the chances that a driver would accidentally back into another vehicle or change lanes at the wrong time.

The other trims have blind spot intervention so that they can gently correct steering if necessary, and they have 360-degree monitors. Another feature that the top three trims have is ProPILOT Assist, which is somewhat similar to adaptive cruise control. It allows the Rogue to adjust its speed if the vehicle in front of it has slowed down for some reason, and it allows the SUV to make minor steering adjustments to stay centered in its lane. The most premium Rogue trim can "read" traffic signs and remind people of what type of things might be coming up, like a yield, road work, or lower speed limit.

If it's been a long time since someone has shopped for a new vehicle, then he/she would definitely be impressed at what the 2021 Hyundai Tucson and 2021 Nissan Rogue have to offer. Entry-level trims have all kinds of advanced safety equipment and high-tech components, and mid-level trims have things like heated front seats, automatic climate control, and heated side mirrors with LED turn signals.

The mid-level options for the Nissan Rogue are the SV ($27,44) and SL ($32,100). The Platinum is the most sophisticated trim available, and it is priced at $35,530. This isn't an insignificant amount of money, but the cost is justified since this trim has the technology mentioned above, as well as a memory system for the driver's seat, leather seats, a dual panel panoramic moonroof, a heated steering wheel, and heated front and rear seats.

People interested in the top-level trim of the Ultimate will be happy to find heated and ventilated front seats, heated rear seats, a panoramic sunroof, and adaptive cruise control. Overall, the trims of the two models are fairly comparable to each other, aside from minor differences.

Both of these SUVs are well built, reliable, and safe. They start out with very reasonable prices, so their lower trims can have a lot of appeal amongst customers concerned with their budgets. On the other hand, the higher trims of the Hyundai Tucson and Nissan Rogue are going to have many upscale elements that will make them feel like luxury models.

When deciding between the two models, it will likely come down to a few factors. First of all, the Rogue is slightly more expensive than the Tucson is. It does, though, have the better safety package, and aside from not having standard Apple CarPlay, it could be argued that it has the more comprehensive technology package. However, the Tucson really does come close to the mark with its infotainment system, and some iPhone users may want something with Apple CarPlay.

In terms of performance, the SUVs are in the same general category. The Rogue's engine is marginally more powerful than the larger engine of the Tucson is. The lower trims of the Tucson may seem a little lackluster in comparison because they are stuck with relatively small engines. The Rogue is also the more efficient model, and it has more interior space.

In many regards, the Nissan Rogue comes out on top, but keep in mind that price and personal preferences are going to be important when people are making their final decisions.