2017 Jeep Grand Cherokee Pros vs Cons. Should You Buy? 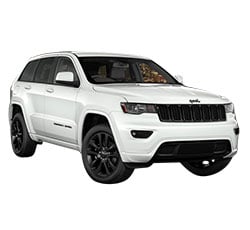 Should You Buy a 2017 Jeep Grand Cherokee? Here Are Some Reasons For and Against

The 2017 Jeep Grand Cherokee remains one of the most highly rated SUVs on the market. Although it is a worthy family vehicle, it still has the ability to conquer a challenging off-road trail. High-tech features, such as the popular Uconnect infotainment system, will keep drivers satisfied on a daily basis.

The majority of Grand Cherokee buyers will likely stick with the Pentastar V-6 engine. With a total output of 295 horsepower and 260 pound-feet of torque, it feels quite potent in everyday driving situations. Regarding gas mileage, an eight-speed automatic transmission helps the SUV to return a commendable 26 mpg on the highway.

When the EcoDiesel engine first hit the scene, the automotive world praised its strong fuel economy. You can expect the diesel-powered 2017 Grand Cherokee to return 22 mpg in the city and 30 mpg on the interstate. However, the EcoDiesel model offers more than just fuel savings. It can also tow up to 7,400 pounds.

If you have been searching for a high-performance SUV, be sure to check out the Grand Cherokee SRT. It comes equipped with a big V-8 engine, which churns out 475 horsepower and 470 pound-feet of torque. It also recorded a mesmerizing 0-60 time of 4.8 seconds. An adaptive suspension and a performance-tuned steering system come standard.

Regarding off-road prowess, the new 2017 Jeep Grand Cherokee Trailhawk is destined to become a legend. An aggressive Quadra-Drive II 4WD system gives you the maximum traction in rugged environments. Undercarriage skid plates provide the Trailhawk model with an extra barrier of protection. Some of the other enhancements include hill ascent technology, a limited-slip rear differential, and an adjustable suspension.

The 2017 Grand Cherokee is easily one of the most dashing SUVs in its class. However, the revamped Summit model is a legitimate showstopper. It comes loaded with a special chrome grille and a flashy set of 20-inch wheels. On the other hand, the racy SRT model features a muscular body kit. Several cool paint colors are available, including Redline 2 and Recon Green.

The 2017 Jeep Grand Cherokee can seat up to five people. Even when sitting in the backseat, tall folks will be able to travel in comfort. Ventilated front seats are optional. You can also load plenty of extra gear in the SUV’s versatile cargo area. When taking a family vacation, everyone can easily toss their travel bags in the back.

Aside from its confidence-inspiring impact protection, the 2017 Jeep Grand Cherokee also offers a lot of modern safety features. Every model comes equipped with a backup camera and parking sensors. In the event of an emergency, the automatic braking system can bring the SUV to a quick stop. Blind-spot monitoring and lane departure intervention are offered as well.

Don’t hesitate to choose the well-equipped base model. With a MSRP of $31,000, the 2017 Grand Cherokee Laredo is the least expensive model in the lineup. A capable 4WD system can be added for just $300 extra. Some of the other standard items consist of a 5.0-inch touch-screen display, an SD-card connection, and Bluetooth technology.

For good reason, a lot of Grand Cherokee buyers will opt for the Uconnect infotainment system. It is regarded as one of today’s best interfaces. A Wi-Fi hot spot comes with the Uconnect system, which is a major asset for the drivers who are constantly on the move. You will also be able to choose from several popular apps.

Reasons Not to Buy a 2017 Jeep Grand Cherokee – The Cons

If you want to purchase one of the upscale Jeep Grand Cherokee models, be prepared to pay for the extra equipment. The extravagant Summit model carries a MSRP of $54,500. Meanwhile, Jeep priced the high-performance SRT model at roughly $68,000.

2. No Manual Gearbox for the Thrilling SRT Model

The Jeep Grand Cherokee SRT is certainly a powerful driving machine. While the eight-speed automatic transmission performs flawlessly, some drivers will prefer the sportiness of a manual gearbox. Unfortunately, Jeep decided not to offer a traditional manual clutch.

For the 2017 model year, Jeep continues to offer its famous Hemi V-8 engine. While the 5.7L version returns 14 mpg in the city, the SRT's larger 6.4L variant can only deliver 13 mpg in urban areas. Furthermore, the SRT model requires premium fuel.

According to many drivers, the 2017 Jeep Grand Cherokee is the ideal SUV. Not only can the Grand Cherokee pull a sizable load, but it can also overcome tough off-road obstacles. The race-inspired SRT model is among the world's most fastest SUVs. Of course, the 2017 Grand Cherokee can still perform its duty as a secure family hauler.