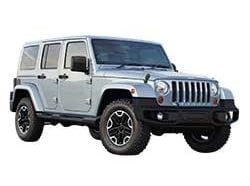 What 2018 Jeep Wrangler Trim Level Should you Buy? What is the Difference Between the Trims?

There are no cars that have the same kind of instant brand recognition as the Jeep Wrangler, even after the more than three decades that it has been around under the Wrangler name, not including its CJ predecessors. While the rest of the compact SUV market has moved to plush, soft-riding crossovers, the Wrangler was something completely different: a 100%, honest-to-goodness off-road car.

Despite its poor road manners, low gas mileage, and a spartan interior with few of the modern technological amenities, the Wrangler remains among the most-sold SUVs in America.

The 2018 Jeep Wrangler may look very similar to last year’s model, but it is almost a completely different vehicle. After its first redesign in nearly a decade, the current Wrangler offers a lot more when it comes to infotainment and creature comforts, while still serving as a top-class off-roader. Fiat Chrysler - Jeep’s parent company - has also simplified the Jeep trim level selection for this year, making it easier to select the right combination of ruggedness and comfort.

In order to help both new Jeep enthusiasts looking to join the Wrangler club and old hands looking to upgrade their rock climbing machine, we have put together a quick summaries of the different trim levels available on the 2018 Wrangler, along with some advice on how you can maximize the amount of features and fun you can get out of the new Jeep.

Compare the 2018 Wrangler Sport vs Sport S Trims. What is the difference?

The Sport model of the Wrangler hosts all of the comfort and convenience features that one would expect, which is to say: not too many. The Wrangler is probably one of the few cars that start at $27,000 that do not include either power locks or air conditioning. Not that you would need the latter with the cloth convertible top, though a hard convertible top is also an option.

It does come with a few nice modern technology features though. There is a standard 5-inch touchscreen running UConnect 3 infotainment and a rearview camera. Push-button start is also standard. Like most Jeep models, the Sport comes in both two-door and four-door varieties, and either a manual or automatic transmission. In addition to a three-piece convertible hard-top, the only upgrade option available on the Sport is air conditioning.

The Sport S is very similar to the Sport, but with all of the standard equipment that one would expect from a car built in 2018. Air conditioning is standard on this model, as are power doors and windows. It also comes with alloy wheels instead of the Sport’s steel ones. More importantly, the Sport S allows a much greater range of customization that covers many of the more popular technological options. The Technology Group upgrades the Wrangler’s infotainment to a 7-inch touchscreen system with satellite radio and support for Android Auto and Apple CarPlay.

That is mainly the deciding factor between the Sport and the Sport S. The Sport is a bare-bones version of the Wrangler that is not really meant to spend time on the pavement except as a way to get to and from off-road trails where it will be primarily driven. The Sport S, meanwhile, can double as a passable compact crossover during the off-season as well.

If the new Wrangler is going to be your only car, or the one you spend most of your time driving, then upgrading to the Sport S will almost always be the right decision. Even if the plan is for the Wrangler to be just a weekend car, however, the many options on the Sport S can make it attractive. The Cold Weather Group can make a huge difference in comfort during the winter, while the Active Safety Group can make it easier to switch off between the Wrangler and a smaller car. In general, unless you are looking for that authentic bare-bones Wrangler experience, the Sport S is likely to be worth the extra money.

Compare the 2018 Jeep Wrangler Sport S vs Sahara Trims. What is the difference?

The Sahara is the premium 2018 Wrangler trim level. Larger wheels, body-colored exterior accents, and upscale interior touches separate it from the Sport S visually. It also comes standard with the Technology Group from the Sport S. In exchange, it offers a more extensive Electronic Infotainment System Group, which can upgrade the infotainment even further to an 8.4-inch system with navigation and comes bundled with the 9-speaker Alpine system.

Both the Cold Weather and the Active Safety packages from the Sport S are also available on the Sahara, as well as an LED Lighting Group that includes LED headlights, tail lights, fog lights and running lights. And while the Sahara comes with cloth upholstery standard, it is also available with a leather interior. Unlike the other Wrangler models, it is only available in a four-door configuration.

While the Sahara is not really in the same class as luxury crossovers, it is arguably the best-looking Wrangler, at least in a conventional sense. While the base model adds little beyond some visual effects over the Sport S, the leather upholstery, improved infotainment and brighter headlights are all features that are not hard to appreciate. That said, most of the key features aside from those are also available on the Sport S, making the upgrade to the Sahara more about appearances than anything else.

If you find yourself wishing the Sport S looked a little nicer or you need your seats wrapped in leather, the Sahara can be a good option. Otherwise, the Sport S offers the same functionality at a lower price.

Compare the Wrangler Sahara vs Rubicon Trims. What is the difference?

Where the Sahara is all about comfort and visuals, the Wrangler Rubicon is all about maximizing off-road performance. It has a similar base feature set at the Sahara, though without the interior and exterior visual upgrades. Instead, it features locking front and rear differentials and a strengthened suspension. It has slightly smaller wheels than the Sahara, but they come with much larger off-road tires. The Rubicon also has the more advanced Rock-Trac all-wheel drive system compared to the other Wranglers’ Command-Trac units.

While the Rubicon is mostly focused on performance, it is far from short on creature comfort options. It comes with the same optional packages as the Sahara, which means it can also be fitted out with leather seats and premium audio. It is also available in both two-door and four-door configurations, and can be equipped with a set of steel bumpers.

The Rubicon is to other Jeep Wranglers what the Wrangler is to other SUVs in general. Named after and designed to traverse the Rubicon Trail in the Sierra Nevada mountains, this is the choice for the dedicated off-roader. In general, if you are an experienced off-road enthusiast, you will know if you need the additional capabilities of the Wrangler Rubicon for the trails you are planning to explore. If you are new to the hobby or aren’t looking for extreme challenges, then you can safely stick with the Sahara.

The Jeep Wrangler is a very specialized vehicle, so it makes sense that many of its trim levels would likewise be aimed at a specialized audience. For most drivers interested in the Jeep Wrangler, the choice will come down between either the Sport S or the Sahara, thanks to their good selection of standard features and a good choice when it comes to options.

Drivers looking for something relatively simple while still having everything important will find the Sport S to be the perfect balance, especially with a package or two. Drivers looking for something a bit more upscale will gravitate towards the Sahara instead. The other two trim levels are both designed for a very specific audience. Jeep’s designers have said that they see the Sport model as being a base on top of which Jeep customization enthusiasts can build their own custom off-roaders. The Rubicon, on the other hand, is a pre-made solution for traversing some of the most difficult trails.

In general, if you know what kind of Wrangler you need, you are probably going to buy a Sport or a Rubicon. If you are unsure, then either the Sport S or the Sahara will be your best bet.

Buying Tip: To avoid overpaying on a new car, shop prices online first. Get up front pricing before you walk into a dealership. We recommend the following free services; Car Clearance Deals,   Edmunds,   CarsDirect,   NADAguides  &  Motortrend. These free services will offer you the lowest prices and supply you with multiple competing price quotes. You will know the best price before you visit the dealer.
Save Money on a 2018 Jeep Wrangler:
Are you Shopping for a New Vehicle? Find the Best Deals with "Free - No Hassle" Prices Quotes.