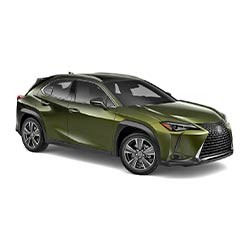 Should You Buy a 2021 Lexus UX? Here Are Some Reasons For and Against

The 2021 Lexus UX looks and feels like a luxury vehicle. As a crossover, some may consider it to be a subcompact SUV. Either way, it has a big personality and it's wrapped up in a small, tidy package. The UX will win a lot of customers over, especially if they have a taste for things that are sophisticated and still want something that's easy to drive.

Having debuted in 2019, the UX is a fairly new addition to the market. For the 2021 model year, Lexus has made a few changes to help the UX appeal to more consumers. First, blind spot monitoring and rear cross-traffic alert are now standard. Also, the hybrid version of the UX has been tweaked a bit so that it has more cargo space than before. It has about 22 cubic feet in comparison with the 17 cubic feet in the non-hybrid models.

The UX has an eye-catching design. Its front grille is distinct, with angles and geometric shapes cut into it. The angles of the headlamps contribute to the modern vibe of the car, and the slightly sloping roof help the UX seem more aerodynamic. Overall, this model has an innovative shape that will appeal to people who prefer something different than a traditional sedan or SUV.

While hybrids are becoming more popular, their availability isn't always guaranteed. With the UX, Lexus has made a hybrid version available. It's called the UX 250h. Like the UX 200, it uses an in-line four-cylinder engine, and it has a high-output electric-drive motor. Because it has two sources of power, the UX 250h is more powerful than the UX 200. Best of all, it can earn up to 41 miles per gallon.

Even if someone chooses to stick with a traditional powertrain, the UX can be fairly energy efficient. It can achieve an estimated 37 miles per gallon on the highway, which is an impressive feat. In the city, it's able to earn an estimated 29 miles per gallon. Many people will appreciate that this model is far from being a gas-guzzler.

There is a good amount of luxuries inside the cabin of this Lexus. Every trim has a leather-wrapped steering wheel and shift knob as well as power-adjustable seats in the first row. Synthetic leather seats are standard, and though they're not genuine leather, they look and feel pretty close to the real thing. The aesthetic in the car is very pleasant, and there's the opportunity to upgrade a UX to have heated and ventilated front seats, a heated steering wheel, and more premium features.

Standard on this crossover are Apple CarPlay, Android Auto, Amazon Alexa, SiriusXM, and a seven-inch center display. The interface is user-friendly, and people can use voice commands if they want to keep their hands on the wheel. The UX is ready to work with a smartphone that has the Lexus app on it. Through this app, someone can remotely start the engine, schedule a service, and check on vehicle diagnostics. A bonus feature is that every UX can act as a Wi-Fi hotspot, enabling people to stay connected to the network while they're on the move.

Available on the UX are navigation, a larger touchscreen, a head-up display, and wireless charging.

Technology isn't just found in the infotainment system; it also plays a major role in the safety package. Every Lexus UX comes with several driver-assist technologies that make up the Lexus Safety System+ 2.0. Some of the features are pre-collision braking, pedestrian detection, lane departure alert, and adaptive cruise control. These can all act as back-up mechanisms for when people find themselves in unexpected and unfortunate situations. They can provide useful warnings and could even correct steering or hit the brakes, as appropriate.

7. Parking Can Be a Breeze

The UX can be upgraded with an intuitive parking assist program. When it's engaged, drivers will be provided notifications when they get too close to objects while parking. Sensors are placed in the front and rear of the Lexus, so this feature works when parking in parallel or perpendicular spots. It can potentially prevent a lot of scrapes and dings.

If anyone is looking for a more exciting ride around town, he/she can consider getting the UX F Sport. It has improved handling because it uses a more finely tuned suspension. It comes with paddle shifters to give drivers more control, and it has some special details in the cabin. For instance, it has bolstered front seats, a steering wheel trimmed with perforated leather, aluminum pedals, and some instrumentation that is similar to what might be found in a race car.

The Lexus UX can be filled with surprises around every corner. Some of the higher trims have a power-operated liftgate that can be activated through the use of a kick sensor. People may use this feature more than they think they will, since they're likely to have their hands full when loading up their cars. In addition, the UX can come with LED-illuminated air-vent knobs that are both functional and futuristic. Further, the car can be enhanced with a rearview mirror that's more than meets the eye. This mirror can dim when it senses bright lights at night, it has a compass built into it, and it has HomeLink technology so it can act as a garage door opener.

If someone prefers "music" of a different sort, then the Active Sound Control (ASC) feature can be used. ASC uses the speaker system to enhance the sound of the engine. In other words, it can broadcast the noise made by the engine using the existing speakers. Some of that sound is artificially produced, such as when the hybrid model is relying on the electric motor. Lexus has put ASC in this model to mimic what it can be like to be behind the wheel of a race car.

Most people would expect a model made by Lexus to come with a somewhat hefty price tag. After all, people get what they pay for. That being said, someone could make an argument that the Lexus UX is overpriced. The higher trims get very close to the $40,000 mark, and this may simply be too much for an average customer to afford. By some accounts, the UX can be viewed as too expensive, especially considering its compact size.

As mentioned above, it's great that Lexus has given its customers two engines to choose from. The unfortunate part is what each engine is capable of. With the standard engine, the UX will only have 149 horsepower. This pales in comparison to what many sedans and SUVs can do, and this even includes models made by non-luxury brands.

The hybrid powertrain on the Lexus is a little better in this regard, but it's still nothing to be too excited about. The hybrid UX delivers 181 horsepower. It would have been more impressive if it would have taken horsepower up to 200 or more.

The Lexus UX isn't marketed as a large SUV, so no one should go into the vehicle-shopping experience expecting a cavernous cabin from this model. When someone sits inside the back of the crossover for the first time, he/she may still be surprised at how cramped it is. Second-row leg room is barely more than 33 inches. Most adults will be able to fit in the back, but it might not be super comfortable for them.

4. Not Much Cargo Room

Behind the rear seats, there is a dedicated cargo area that can be convenient for carrying gear. However, that gear has to be somewhat limited since the cargo area isn't cavernous. It's less than 22 cubic feet, making it a little bigger than a trunk on a sedan but much smaller than the cargo area on larger SUVs. From a practicality standpoint, the UX may have limited appeal.

The demand for smaller SUVs and crossovers seems to keep growing, and there are several other luxury models in the same category as the Lexus UX. Fortunately for the UX, there are some ways in which it stands out.

Cadillac makes a few SUVs, with the XT4 being its smallest. It has a similar size to the UX, but it's a bit more expensive. Some wouldn't consider the extra cost to be warranted after analyzing all of the features of both models. With the XT4, there isn't any hybrid option, so someone looking for an eco-friendly vehicle would have to look past it.

To be honest, the Porsche Macan is going to be the more exciting choice. It has a few different available engines, all of which will outperform what's found on the Lexus UX. That power, though, comes at a steep price. The Macan costs about $20,000 more than the UX does, and some Macan models could be almost $30,000 more than the UX. Most people don't have this much money to throw around. Plus, the Macan isn't going to win versus the UX in terms of interior space or versatility, and one more point is that the stylings on the Macan don't resonate with everyone.

If anyone out there is looking for something that's fun, upscale, and different than the standard vehicle, the Lexus UX should be on his/her short list. This model has a nice combination of features, and it could be a reasonable choice for people with healthy budgets.