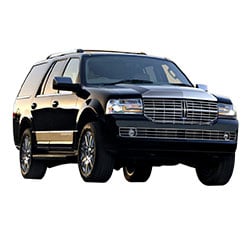 Should You Buy a 2016 Lincoln Navigator? Here Are Some Reasons For and Against

Even as critics claim the 2016 Lincoln Navigator handles poorly on the road, and a not-so-good body, they will appreciate that there has been some major improvement from the previous model. Some of the new teaks include a more powerful engine and pimped up interior to make the Lincoln Navigator a match for the likes of the Toyota Land Cruiser 2015. The Lincoln Navigator is ranked as a Luxury Large SUV, under a subcategory of SUVs with 3 Rows.

Unlike some automobile brands that recycle previous features for the next car model, everyone is happy that the Lincoln Navigator has made necessary improvements. At least at its going price it gives the consumer something to consider while placing it side by side with the Toyota Land Cruiser 2015. So what reasons will prompt one to reach for their wallet and make a trusted purchase of this 2016 SUV machine?

The Lincoln Navigator 2016 upgraded to leather upholstery that sits comfortable around a soft leather interior. This generous use of leather is complimented by rich wood details which completes a unique and luxurious look that appeals to the eye. The front and rear seats are heated and cooled for comfort during changing climates.

The spacious cargo area that was stepped up in the 2015 model has been maintained on the 2016 Lincoln Navigator. The 1st and 2nd seat rows are also quite supportive, and those who took this machine for a test drive report the 3rd row to be quite spacious of the three.

The Lincoln Navigator 2016 has been voted as one of the smoothest rides in the Luxury Large SUV category. Under the hood is a V6 Twin Turbocharged engine, a necessary upgrade from the lower engine performance in the 2014 model. The engine delivers a horsepower of 365 HP/5000rpm, enough power to deliver great maneuverability both on and off road—it generates a maximum towing power of 9000 pounds for an SUV in its class. The SUV is primarily a rear wheel drive and can be upgraded to a 4WD on request. The Land Cruiser 2015 packs about 381HP @ 5600rpm; quite higher comparatively but the Lincoln handles the competition well enough.

Packing so much power and speed, the Lincoln Navigator 2016 definitely needed some safety reinforcements to ensure passengers are protected while on a cruise. For airbags, they are installed in both the drivers and passengers’ area. Additional airbags are installed on the rear head, side head and all other sides. Braking capabilities are phenomenal as well given that the SUV is installed with 4-wheel ABS technology handling all the disc brakes.

More features to look forward to include:

The Lincoln Navigator 2016 maintained the same color options seen in the 2015. So the consumer can still enjoy different metallic color shades on the exterior like Ingot Silver, Midnight Sapphire, White Platinum, Magnetic Metallic, Bronze Fire and Java Metallic. It was considerate of Lincoln to bring in fresh new colors and step down from what they offered in 2015 like Tuxedo Black, Riviera Sands, White, Sterling Gray and Kodiak Brown.

With such remarkable fuel efficiency on the road, the Lincoln Navigator 2016 also doubles up as economical on the price tag. It retails for about $60,000 on the lowest, quite affordable comparing to the Toyota Land Cruiser retailing at $80,000. The consumer saves $20k extra while enjoying a car with smooth automatic transmission and less fuel consumption on the road.

For those who enjoyed the design of the 2015 Lincoln Navigator, the same design is maintained in this new one. The consumer gets the same exquisite look while the hood and interior packs better features and upgrades. On request, the vehicle can include sun and moon roofs and power sliding sunroof.

The driver can switch to cruise control on the road and park accurately in tight spots thanks to the rear parking aid. The Lincoln Navigator also comes with:

There is plenty of entertainment to choose from while cruising highways or tearing through terrains. The Lincoln Navigator 2016 comes with an in-built MP3 player, AM-FM radio, HD radio and Satellite radio. There are rear audio seats controls and a premium sound system as well to enjoy one’s self whenever they feel like.

Nothing has changed in terms of body design, which will be a disappointment for Lincoln enthusiasts who were looking for something new. The Toyota Land Cruiser also seems to have a much smoother body design, compared to the Lincoln that looks too, edgy especially on the rear. Some consumers also complained of an overly use of cheap plastic in the interior.

2) A Downgrade in Engine Power

The previous Lincoln Navigator 2015 boasted of a V6 power engine with horsepower of 381, which is definitely a downgrade in the new V6 model. The Toyota Land Cruiser packs more power with a V8 engine. This explains the many complaints of how poorly the vehicle handles, especially when off-road.

Some critics complain of a confusing navigation system and the voice command system also comes out as frustrating. The Toyota Land Cruiser 2015 always delivers on comprehensive command options, so the Lincoln takes a seat on this one.

Despite a few drawbacks, fans of the Lincoln Navigator will definitely appreciate the boost in fuel efficiency and an abundance of exterior color options. The engine packs enough power to make the Lincoln an ideal travel car on the road or major highways.
2016 Lincoln Buying Guides: