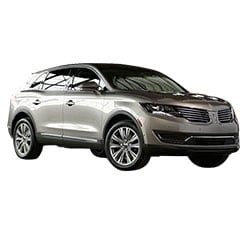 Should You Buy a 2017 Lincoln MKX? Here are the Pros and Cons

The Lincoln MKX is a luxury SUV that always draws a lot of attention each year, and the 2017 edition is no different. Today, we'll examine the MKX by listing 10 of the best reasons to buy one and then a few reasons to hold off on the purchase.

The 2017 Lincoln MKX is essentially the same as the 2016 edition. There are no new features, changes, or trim options, which is a positive thing considering how well-received the 2016 MKX was.

The safety features might be the best part of the MKX, which is saying something. It boasts a perfect five-star rating from the NHTSA and top-level "Good" ratings across the board from the IIHS, earning a Top Safety Pick award from that body. That puts it above and beyond most of its luxury midsize competitors. The top trims and the Driver Assistance and Technology packages provide advanced safety features.

Despite being a luxury SUV, the MKX is actually priced lower than most of its rivals. At each trim level, it is less expensive than each of its rivals without compromising on the feature set. In fact, the cheapest models are comparable to a fully-equipped ordinary SUV, with the addition of a superior interior design and features.

To be honest, a big part of the reason to buy a luxury vehicle is to enjoy it. The optional twin-turbo engine does just that. The basic V6 is fine, but the option has better acceleration, a smoother ride, and slightly better MPG. It is a big difference and changes the whole driving feel of the car, and it's one of the most important options for that reason.

The 2017 Lincoln MKX handles very well around corners, and it is almost impossible to notice the car leaning along the turn. Some extra features help out here, such as adaptive steering. This changes the car's response to the steering wheel based on road conditions, optimizing turning at all times. It's a midsize SUV but parks easily thanks to this feature and other driver assistance tools.

The drive is always smooth and comfortable in the 2017 Lincoln MKX. The vehicle has an optional Drive Control System that provides three modes- neutral, sport, and comfort. Comfort adds better suspension for city roads, sport is best for corners and twists, and neutral is good for straight highways. The total effect is luxury comfort in any road condition and a feeling of greater control over the ride.

The 2017 Lincoln MKX makes efficient use of its space, allowing you to use a total of 70 cubic feet of space. Of that, 37.2 cubic feet are located in the back behind the last row. That's plenty of room for luggage, groceries, sports bags, and most other family needs. It's the biggest difference between the MKX and the smaller Lincoln MKC.

The 2017 Lincoln MKX is quite comfortable to sit in, even for taller passengers and drivers. Of particular attraction is the optional massage seats for the front row, which are perfect for long drives. The rear seats offer over 39 inches each for headroom and legroom so there is space to stretch out. The optional telescoping steering wheel is another good comfort option for tall drivers.

The active sound cancelling makes for an incredibly quiet cabin. Pair that with the space and it's no wonder that this is an easy car to fall asleep in. However, the 2017 Lincoln MKX really shines in upper trims that use top-tier materials, including leather and wood in some cases. That adds to the feeling of luxury throughout the car and ensures a memorable riding experience.

The 2017 Lincoln MKX has a large 8-inch touchscreen along with plenty of extras, like smartphone integration and SYNC 3. The sound system upgrades consist of 13 or 19-speaker Revel stereo choices, which deliver a noticeable improvement to an already great sound. Using the console to navigate or perform other tasks is easy, especially with the optional voice controls that come in some packages.

Too many brands have trim options that don't vary much and are too similar to each other. The 2017 Lincoln MKX has four trims that vary significantly in their standard and optional choices, providing a wide range of selections for different budgets. The middle two trims, the Select and Reserve, are particularly good value because they include useful features and have important driver-assistance packages.

The MKX is not as fuel-efficient as its competition. It gets 16 MPG in cities and 23 on highways. This gets a little better with the optional engine and some other packages, but in general other midsize luxury SUVs do better with gas. You'll need to spend extra on fuel if you want to make this a daily driver.

Although the primary draw of the MKX is that it is the most budget-friendly luxury SUV, the top-end Black Label trim is rather pricey and adds little beyond the second-highest trim. Other luxury SUVs that cost in that range have better features for the price, so it's hard to justify choosing that trim unless you are absolutely in love with the upgraded interior.

In general, the design of the MKX is quite good and luxurious. However, there are a few spots on the dashboard that tend to use lower-quality materials and it is not clear why. This should not be a dealbreaker, but it is a curious oversight on the part of Ford.

The other comparable inexpensive luxury midsize SUVs are the Cadillac XT5 and its smaller cousin the Lincoln MKC. The MKX stands out with its safety features and rating. The MKX is also similar to Ford's nonluxury SUV, the Edge, and the two share very similar features lists, with the MKX having a significantly nicer cabin.

The 2017 Lincoln MKX is one of the least expensive luxury SUVs that still has lots of cargo space and a great feature set. It also has top-quality safety ratings, but lags in fuel efficiency and isn't quite as luxurious as the market-toppers.

Compare Local Dealer Prices
Find the Best Deal
Save Thousands on a 2017 Lincoln MKX! Start Your Own Online Price War