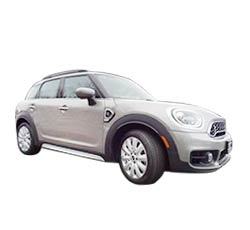 Should You Buy a 2020 MINI Countryman? Here Are Some Reasons For and Against

The Countryman is the largest MINI on the market. It feels a little more like a crossover/SUV than a sedan, and it has been available since 2010. It gives customers who love the look of a MINI a more practical option than a small, two-door vehicle; the Countryman has four doors with two comfortable rows of seating that can fit up to five people. There are several different engines, giving people the flexibility to choose whether they want to go with a budget-friendly model or get a higher trim that places a premium on performance.

The brand has done a nice job of mixing the old and the new with its 2020 MINI Countryman. The car retains some classic elements while managing to feel modern and fresh. Three models are available - the Cooper Countryman, Cooper S Countryman, and John Cooper Works Countryman. Various trims, packages, and accessories can be added on as well, so each Countryman has a distinct feel.

MINI has made a few changes to its Countryman. First of all, it has added a few different 18- and 19-wheels to the list of options, a move that's not surprising since the company knows how much its customers like to customize their vehicles. Active Driving Assistant, which is a driver-assist safety package, becomes standard on 2020 models. Additionally, several of the front-wheel drive models of the Countryman have switched to using a dual-clutch transmission with seven speeds; all-wheel drive models use an eight-speed automatic transmission. Other minor changes are related to things like exterior lighting and climate control.

All models of the 2020 MINI Countryman get to harness the energy that a TwinPower Turbo engine generates. The Cooper and Cooper ALL4 models use a 1.5-liter version with three cylinders, and the the other models run on 2.0-liter engines that have four cylinders.

The base models have 134 horsepower and 162 pound-feet of torque. The Cooper S models have much more pep, at 189 horsepower and 207 pound-feet of torque. Acceleration from zero to 60 miles per hour is decreased by over two full seconds when moving from the Cooper to the Cooper S. This is enough of a difference for some customers who will definitely move up to at least the Sport model.

The John Cooper Works All4 Countryman is in a class of its own. Its two-liter engine is built differently than the one in the Cooper S, and the result is an impressive 301 horsepower and 331 pound-feet of torque. In under five seconds, the car can zoom to 60 miles per hour. This puts it on par with luxury vehicles that are powered by very capable engines, and it makes the ride in a Countryman pretty thrilling.

The 2020 MINI Countryman feels like an SUV in more ways than one. The available all-wheel drive is called the ALL4 system, and several models can come with it. Since the system continually monitors how the wheels are doing, any loss of traction automatically leads to a redistribution of power so traction can be optimized. Having an ALL4 Countryman is great for peace of mind, especially if one sometimes runs into slippery conditions.

3. Ready for the Cold

In addition to the all-wheel drive system, there are several other features on the 2020 MINI Countryman that make it ready for the winter months. Heated side mirrors come standard across all models, an electric front window defroster is available if anyone wants to cut down on time spent scraping off the ice, and the available heated seats have three different heat intensities. With these features, there's no need to shy away from going on cold-weather adventures.

In a traditional MINI, people might feel a little cramped no matter where they're seated. In a 2020 MINI Countryman, this isn't necessarily the case. The overall length is over 169 inches, and the car stands relatively tall at 61.3 inches. This all translates into a larger cabin, with 40.4 inches of leg room in the front and 37.6 inches of leg room in the second row.

Behind the second row of seats is a sizable storage area that measures over 17 cubic feet. This is in the ballpark of what many other crossovers offer, which is notable since MINI's are traditionally thought to be compact in all dimensions. The rear seats can be lowered to create over 47 cubic feet of cargo capacity.

Though the base model only comes with four exterior paint colors, most models come with at least eight or nine choices. The Countryman can even come in with a modern, two-tone look, as the roof and mirror caps can be white or black to contrast the body color. Combinations like Island Blue and White or British Racing Green and Black are sure to leave an impression.

Inside the cabin, there are several available seating materials. Some of the choices are ones that seem like they came from across the pond. This include Chesterfield Leather in British Oak or Satellite Gray, as well as Cross Punch Leather in Carbon Black. They have elegant stitching and a soft feel to them, and passengers might even feel a bit royal as they drive around town.

The higher Countryman trims come with built-in navigation, which can be quite convenient when trying to get around traffic or find one's way in a new city, and they also come with wireless charging and Apple CarPlay. The screen can be up to 8.8 inches and has easy-to-read text and vivid colors.

If driving a MINI isn't flashy enough for someone, there's the option to enhance the car's appearance with accessories. Union Jack mirror caps or Black Jack mirror caps can immediately draw attention, and they can be completed by black or red sport stripes.

The MINI Countryman comes with standard roof rails to give drivers more options in terms of carrying cargo. Bulky items can be securely attached to the rails, and crossbars and a base support system are available at an additional cost to make it easier to load up skis, kayaks, or other gear.

Reasons Not to Buy a 2020 MINI Countryman – The Cons

Compared with the other MINIs, the Countryman is stretched out and comes with much more room. However, it still sits low to the ground. Some people may prefer the way the car hugs the ground, but this could prove problematic in uneven terrain. It seems like it would difficult to drive the Countryman over bumpy roads without scraping the bottom of the frame, and drivers may even have to go over speed bumps and dips in parking lots at very low speeds.

The base model of the 2020 MINI Countryman is priced under $30,000, but all the other models are above that 30K threshold. With add-ons and higher-end trims, the price just continues to skyrocket. A model at the top end of the spectrum could be well into the $40,000s, and some might not feel that all of the MINI features warrant such an expensive price tag.

It may be surprising that touchscreens aren't standard across all models of the 2020 MINI Countryman. Base models don't come with a touchscreen, only a media display. This may turn some people off, since many other vehicles that are much more affordably priced do come with standard touchscreens and advanced infotainment systems.

How it Stacks Up to the Competition:

The Honda Fit and Kia Soul are two vehicles that have some similarities to the 2020 MINI Countryman. With the Honda Fit, the Countryman wins the horsepower match-up by quite a bit, since the Fit only has up to 130 horsepower. The Kia Soul has a bit more oomph, with up to 201 horsepower, but it still can't compete with the tricked out John Cooper Works Countryman.

If someone is looking for a new vehicle that has great style and also has some room inside its cabin, the 2020 MINI Countryman should be considered. Equipped with the some of the same traditional elements that have made MINIs popular all over the world, the new Countryman has a unique appearance with a flat top and unmistakable body shape. In one way, it looks like it has just traveled in time from the 60s, but when one steps inside the cabin, it's clear that modern amenities are abundant. The infotainment system comes with an available touchscreen and wireless charging, and driver-assist features can help drivers stay safe. Overall, the MINI Countryman has a great blend of components, and it would be a fun vehicle to drive.

Save Money on a 2020 MINI Countryman:
Find New Car Clearance Prices - Many Vehicles are Selling Below Dealer Invoice Prices.

Every dealer offers a secret price. Many prices are below invoice. Find yours here.
2020 MINI Buying Guides: