2014 Nissan Pathfinder Pros vs Cons. Should You Buy? 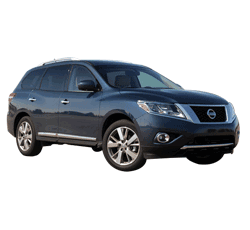 The Top 10 Reasons Why You May want to Buy a 2014 Nissan Pathfinder:

The arrival of the fourth generation Pathfinder in 2013 marked a radical departure from previous versions of the three-row SUV with the introduction of a unibody deign. Prior to 2013, the Pathfinder was built on a truck chassis, and fuel economy was marginal. The older Pathfinders were rugged, box-like vehicles that were decidedly more utilitarian than upscale. [ For the 2015 model see - Nissan Pathfinder Pros and Cons ]

The fourth generation Pathfinder is still quite capable in towing and off-road situations, yet it has shed a quarter-ton of weight. The 2014 version is certainly nimble and capable as a suburban runabout, but it is far more versatile than that.

The 2014 model year Pathfinder is now offered as an optional hybrid. A supercharged four-cylinder 2.5L gasoline engine combines with a 15kW electric motor to offer enhanced fuel economy. The hybrid's power plant is rated at 250 hp and 243 lb-ft of torque. The electric motor runs off of a lithium-ion battery pack located underneath the third row seat. The hybrid Pathfinder features an impressive EPA combined rating of 26 mpg. The only other seven-passenger hybrid SUV on the market is the Toyota Highlander hybrid.

Ten Reasons to Buy a 2014 Nissan Pathfinder - the Pros

Even the gasoline-powered version offers impressive fuel economy. The 3.5L, V-6 engine is rated at 20 mpg city, 26 highway and 22 mpg combined for the front-wheel drive version. Opt for all-wheel drive, and fuel efficiency only declines by a mile or two per gallon. These are competitive numbers among seven-passenger SUVs. The engine may not be quite as robust as that found in the Dodge Durango, but it is still rated at 260 hp and 240 lb-ft of torque.

The Pathfinder offers more realistic third-row seating than some of its competitors. In fact, a car seat in the second row does not have to be removed to gain third-row access. For certain families with multiple car seats to contend with, this can be a real plus. In many three-row vehicles, that last row is strictly the domain of children. By contrast, the third row in the Pathfinder can accommodate adults six-feet tall, albeit with slightly less than ideal legroom.

The 2014 Nissan Pathfinder is almost universally praised for its high-quality cabin materials and interior design. The Premium edition offers a particularly high-end feel. Add options like Bluetooth, navigation and/or a 13-speaker Bose audio system, and the creature comforts multiply.

Tow up to 5,000-lb, carry a couple of kayaks on top, and load the Pathfinder up with family and cargo. Now, try to imagine the same configuration with some of Pathfinder's competitors like the Ford Flex or Chevrolet Traverse. Pathfinder's comfort and sophisticated electronics belie the fact that this is much more than a crossover good on a snowy day in the suburbs. It's more than a vehicle to haul lots of kids and athletic gear around in. The 2014 Pathfinder will tow that boat or trailer and look competent while doing it.

Pathfinders are popular for road trips and family vacation, and the panoramic sun roof is an enjoyable addition on those journeys. Even a daily commute or a trip around town can be enhanced by this expansive sunroof that allows more of one's surroundings to be enjoyed.

Invest in a Pathfinder and enjoy the same precise, capable powertrain that the Infiniti SX60 has, but for thousands of dollars less. The Infiniti SX60 will be loaded with luxury appointments, to be sure, but it offers the very same towing capacity, for example.

The surround-view camera system in the Platinum edition uses four different cameras to provide the driver with a comprehensive view of activity on all sides of the vehicle. For many, this feature adds confidence during the operation of a substantial three-row vehicle. All other Pathfinders except the base "S" offer rear parking sensors and a rearview camera.

Dual-zone climate control is often touted as an advantage in numerous crossovers and SUVs. However, anyone wanting to transport children in the third row of larger vehicles like the Pathfinder will feel more assured that proper heating and cooling are experienced by those children.

The touchscreen that serves as the interface between driver and electronics is intuitive and easy to use. Whether its the seven-inch screen in the SV or the eight-inch one in the Platinum edition, users will find that only a short learning curve is required to master the interface.

The look of a multi-functional SUV may not be the most important consideration for everyone, but the Pathfinder's full makeover in 2013 makes it one of the more stylish vehicles in its class. Ironically, the old Pathfinder offered one of the boxier designs among three-row vehicles. Now, the dramatic re-design by Nissan has re-positioned Pathfinder to appeal to new demographics.

The continuously variable transmissions that are common featured in Nissans generate a certain amount of debate. Some feel that CVTs are less responsive than standard, geared transmissions. However, the CVT is at least partially responsible for the excellent fuel economy that the 2014 Pathfinder offers. Plus, because Nissan committed to develop the CVT concept years ago, the company's transmission technology is quite advanced.

2) Handling not as crisp

The Pathfinder does not corner or steer quite as crisply as the Mazda CX-9 does, and it therefore may not be as much fun to drive. However, this issue arises in part because of the superior clearance that this particular SUV offers. The trade-off is clear. Accept somewhat less precise handling while gaining performance over bumps and rough terrain.

If one takes a head count in the family and finds that accommodating eight passengers is important, then the Pathfinder will take a back seat to a couple of competitors that offer a spot to that eighth passenger.

The 2014 Pathfinder offers prospective buyers a well-conceived balance between different important needs. Fuel economy is impressive, but so is the 5,000-lb towing capacity. The Pathfinder can handle dirt roads and other inhospitable territory with greater ease than much of the competition. This is a legitimate seven-passenger SUV that can reasonably accommodate adults in the back row. Although the 2014 Nissan Pathfinder will appeal to many demographics, it is a truly family-friendly vehicle.

• 2018 Nissan Pathfinder trim levels. What you get with each trim configuration.