2015 Nissan Frontier Pros vs Cons. Should You Buy? 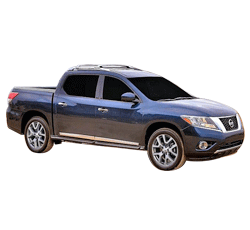 Should You Buy a 2015 Nissan Frontier? Here Are Some Reasons For and Against

1. Power of a Full-size Pickup in a Smaller Package

Despite its small size, the 2015 Nissan Frontier offers the power of a full-size pickup. However, because it's smaller in size, it offers better fuel economy and is more maneuverable overall.

Getting going from a stopped potion is no problem for the Frontier. This is thanks to all off the low-end torque provided by the Frontier's V6 engine. This power is amplified in the automatic transmission model, which downshifts at the right time to truly tap into all of the power the engine has to offer.

Thanks to the four-wheel ABS and four-wheel disc break systems, you will have no problem stopping no matter what you are hauling. The truck even comes with traction control and electronic stability control, giving the driver even more control on the road.

The 2015 is built on a rugged, high-quality platform that can easily handle off-road driving. Handling tough-to-haul loads is what the Frontier was built for. The V6 model gives owners the extra power when they need it most. Despite its rugged performance, the Frontier still has a smooth ride compared mid-size truck standards.

This may be a mid-size truck, but it's designed to handle the load of a full-size truck. The liner of the truck bed has been sprayed with a durable material that will stand up to even the roughest loads. It also comes with movable cargo ties and a sliding bed extender. This provides all of the features of a full-size truck without the high price tag.

When inside the cabin of the truck, there is no guessing about where the controls are located. This is thanks to a straightforward design. The dashboard is easy to read and your controls are easy to find, which lets you focus completely on the job at hand.

Unlike some other mid-size trucks, the inside of the 2015 Nissan Frontier is made out of sturdy materials that can stand up to the test of time. This isn't a truck that makes you feel that you have to be gentle. It's a working man's truck, so it's built to stand up to that lifestyle.

Most mid-size trucks are not known for having roomy back seats. Compared to others in its class, the 2015 Nissan Frontier delivers more space than most. This provides extra room for people who may be sitting in the back or extra room for cargo if needed.

This truck is one of the safest mid-size trucks on the market. This is thanks in part to the standard-equipped air bags. Not only does it come with driver and passenger air bags, but side air bags and rear head air bags are included as well.

The Frontier is not just about hauling big items; it is able to accommodate the small ones too. The cab has plenty of storage space, with a shallow tray in the center console that makes retrieving small items a breeze.

While there is a 4-cylinder option available, most drivers will want the more expensive V6 model. The 4-cylinder lacks any real power and is going to fall short when trying to haul large loads in rough environments.

The overall ride quality of the Frontier is great by pickup standards. However, the turning and steering leave a lot to be desired. When trying to make tight turns, the slow and heavy steering of the Frontier becomes a hindrance. While it's manageable, it takes some getting use to.

As mentioned above, the ride quality is great in terms of pickup standards, but the cabin becomes increasingly noisy as higher speeds are reached. This is caused not only by wind noise but also by the noise from the road and the engine. To make matters worse, this isn't a problem that can be easily fixed.

While the 2015 Nissan Frontier's interior is made out of high-quality materials, it doesn't offer much in terms of eye candy. The truck's interior is built more for standing up to rough treatment, and the result leaves the cabin feeling a bit drab.

Just like with any car or truck on the market, the 2015 Nissan Frontier has a few drawbacks. That being said, there is far more to like about this truck than not. For the price, you are not going to find a better mid-size truck in its class.

• 2018 Nissan Frontier trim levels. What you get with each trim configuration.