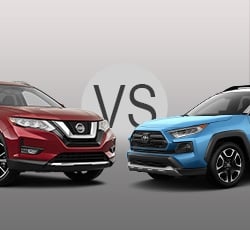 Small crossovers are ideal for drivers who desire an affordable family vehicle. They’re also easier to maneuver in city traffic. While the segment is extremely competitive, the Toyota RAV4 continues to outsell every other model. Many drivers love its extremely rewarding list of standard equipment and solid fuel economy.

The Nissan Rogue is another top-selling small SUV. It’s attractive, comfy, and good on gas. It’s a more affordable alternative to the midsize Nissan Murano. Although the Rogue is made for hardcore off-roading, good clearance makes the AWD-equipped models great for folks living snowy areas. Let’s find out whether the 2020 Nissan Rogue or the 2020 Toyota RAV4 is a better choice for you.

Only one powertrain is available for the 2020 Nissan Rogue. Motivating the SUV is a 2.5-liter, DOHC four-cylinder engine. Although the Rogue’s engine isn’t a powerhouse, it does produce a competitive 170 horsepower. An automatic CVT helps optimize fuel economy.

When test driving these SUVs, there’s no overlooking the RAV’s stronger performance. It’s noticeably quicker and has more passing power. Some drivers will also prefer the RAV4’s eight-speed transmission. Engaging the RAV4’s sport mode gives it an extra degree of driving fun. Although the Rogue’s continuous variable transmission is smooth, it does somewhat limit the SUV’s performance capabilities.

In terms of fuel economy, the more powerful RAV4 yet again comes out on top. It's rated by the EPA to deliver up to 28 mpg town/35 mpg freeway. By comparison, drivers can expect the Rogue to return up to 26 mpg town/33 mpg freeway. Both SUVs use regular unleaded gas.

Folks who need to pull a load will be much happier with the Toyota RAV4. It can tow up to 3,500 pounds. This means drivers should have no issues moving small boats and ATVs. Meanwhile, the Rogue has a low tow rating of around 1,100 pounds.

Like the Toyota Highlander, the Nissan Rogue handles well. It feels confident on curvy roads. However, a sportier steering feel and wider stance give the RAV4 an edge.

Both of these crossovers offer all-wheel drive as an option. While the RAV4 offers a maximum ground clearance of 8.6 inches, the AWD Rogue has a ground clearance of 7.4 inches. When encountering deep snow, drivers will be less likely to get stuck while behind the wheel of the RAV4.

In terms of off-road capabilities, the Nissan Rogue can handle a basic trail. However, outdoor lovers will prefer the Toyota RAV4. For 2020, Toyota has introduced an all-new TRD Off-Road trim into the lineup. It comes equipped with all-terrain tires and a trail-ready suspension. A Dynamic Torque Vectoring AWD system also helps the RAV4 TRD Off-Road to manage slippery terrain.

When it comes to braking, the Toyota RAV4 delivers an average performance for the class. However, drivers find the Nissan Rogue’s brakes to feel less grabby. They smoothly bring the crossover to a stop.

The RAV4 has long held a reputation for being reliable. However, don’t expect the latest generation to be quite as dependable. It received a 3.0 out of 5.0 rating in J.D. Power’s dependability test. Meanwhile, a 4.0 out of 5.0 dependability rating ranks the Rogue among the most reliable models in the class. Rogue owners rarely report any major mechanical problems.

In regard to warranty coverage, neither SUV has a clear advantage over the other. They both have a 36,000-mile bumper-to-bumper warranty and a 60,000-mile powertrain warranty.

Both of these SUVs have an easy-to-drive nature. They drive more like a hatchback as opposed to a truck-based SUV. Ride comfort is also quite similar.

Like its rival, the Toyota RAV4 seats up to five people. However, families will find the Nissan Rogue to be roomier. It has a total passenger volume of 105.8 cubic feet, which is better than the RAV4’s total passenger volume of 98.9 cubic feet. While passengers won’t notice a big difference in rear legroom, there’s significantly more hip room in the Rogue’s second row. This is a key advantage when traveling with three people in the back.

The Rogue is also a better pick for taller drivers. It provides an extra 2.0 inches of legroom. Tall folks will also appreciate the additional front headroom.

The edge in overall seat comfort goes to the Rogue. Nissan’s Zero Gravity front seats are outstanding. They are engineered to reduce back discomfort by keeping the spine in an ideal anatomical position. However, most people will also find the RAV4’s seats remain comfy for hours at a time.

From a standpoint of overall interior quality, most experts choose the Rogue over the RAV4. Soft-touch cabin materials give the Rogue a premium feel on the inside. Toyota lines the RAV4’s interior with more hard plastics. Another nice feature is the Rogue’s flat-bottom steering wheel, which adds a sense of sportiness.

On the road, the Nissan Rogue’s peaceful cabin will put you at ease. There won’t be a significant amount of wind or road noise entering the cabin. Although the RAV4 isn’t loud on the inside, don’t expect it to be quite as quiet as the Rogue.

Whether a person chooses the Rogue or the RAV4, they’ll be rewarded with an easy-to-use infotainment system. They both come standard with a 7.0-inch touchscreen. However, only the Rogue's infotainment system provides Android Auto smartphone support. On the other hand, a built-in Wi-Fi hotspot and sharper graphics are found on Toyota’s Entune interface.

The Rogue provides a decent view of the road. Unfortunately, it does suffer from some distracting blind spots. On the other hand, many RAV4 owners rave about the SUV’s great outward visibility. Even the RAV4’s side mirrors help give drivers a good line of sight.

Both SUVs are deemed by the IIHS to offer superior frontal crash protection. However, their standard headlights received a poor rating. When equipped with upgraded LED headlights, the RAV4 offers better visibility at night.

Luckily, these SUVs don’t charge extra for the most important safety technologies. Intelligent lane control, automatic emergency braking, and smart cruise control are standard on both vehicles. However, only the RAV4 comes standard with blind-spot monitoring. Studies show this safety feature can dramatically reduce the chances of you being involved in a highway accident. While Road Sign Assist and drowsiness detection are standard on the RAV4, these driving aids are not offered on any Rogue trim level.

Pro Pilot Assist is on the Rogue’s list of options. This feature does a great job to lower the driver’s stress levels. It automatically controls steering and braking under certain conditions.

Some drivers will also be thankful for the Rogue’s optional Around View Monitor. By providing a 360-degree view, this four-camera system helps drivers to avoid crashing into parking lot obstacles. Moving Object Detection is built into the system for even greater protection.

Both SUVs are loaded with a satisfying amount of standard features. Some of the common features include a touchscreen interface, satellite radio, and Bluetooth. However, the RAV4 adds a Wi-Fi hotspot. It also features a six-speaker stereo as opposed to a four-speaker system.

Drivers seeking more luxurious accommodations will be comparing the Toyota RAV4 Limited to the Nissan Rogue SL. Prices for the Rogue SL start around $31,590, which makes it nearly $2,800 cheaper than the RAV4 Limited. Toyota also charges extra for heated seats and a heated steering wheel. While the leather-trimmed Rogue SL feels more upscale on the inside, only the RAV4 Limited offers optional ventilated front seats.

It’s a close match between the 2020 Nissan Rogue and the 2020 Toyota RAV4. In terms of pricing, the Rogue has the upper hand. This is especially true for the higher trim levels.

When it comes down to performance, the Toyota RAV4 leaps past the Nissan Rogue. Toyota’s Direct Force engine is much stronger. Drivers can also expect the RAV4’s automatic transmission to do a better job of transferring power to the wheels. While the RAV4 has a tested 0-60 mph time of 8.2 seconds, expect the Rogue to hit 60 mph in 8.9 seconds. Because of the RAV4’s strong fuel economy, drivers won’t have to give up any gas mileage.

Drives who prefer an outdoor lifestyle should pick the RAV4 over the Rogue. Although the Rogue is rugged enough to take you camping, the RAV4 is less likely to get stuck in the mud and snow. This is certainly true for the RAV4 TRD Off-Road, which has a trail-tuned AWD system and a more rugged suspension.

Styling is a draw. Some drivers may favor the RAV4’s bolder exterior. However, others may find it to be a bit too edgy. The Rogue’s sporty front fascia with a signature V-Motion grille stands out.

Whether a person chooses the RAV4 or the Rogue, their family and friends will be comfortable. Rear-seat legroom is excellent. However, taller drivers will have more leg space in the Rogue.

Another important factor is safety. Today’s hottest driving aids, such as automatic emergency braking and active lane control, come standard. To get blind-spot warning, RAV4 buyers must move up to a pricier trim. To enjoy a more stress-free drive, opt for Nissan’s Pro Pilot Assist system.

At the end of the day, neither SUV will leave you disappointed. However, the RAV4’s more inspiring performance helps it to win this head-to-head comparison. Many people will enjoy the RAV4’s snappy acceleration and sportier driving dynamics. A 3,500-pound tow rating also makes the RAV4 a more versatile crossover. Of course, outdoor enthusiasts will cherish the rugged RAV4 TRD Off-Road.

While the RAV4 may have won this battle, don’t overlook what the 2020 Nissan Rogue has to offer. It’s perfect for drivers who prioritize everyday comfort over performance.

Save Money on a 2020 Nissan Rogue:
Find New Car Clearance Prices - Many Vehicles are Selling Below Dealer Invoice Prices.