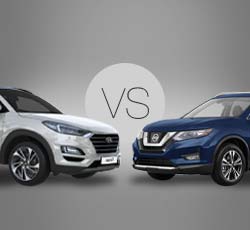 Due to their versatility and practicality, the compact crossover SUV market is an incredibly crowded one. Buyers have so many choices that it is difficult for a vehicle to stand out from the pack. Two options that have managed to become quite popular are the Hyundai Tucson and the Nissan Rogue.

The 2020 Hyundai Tucson has a low starting price and a long list of standard features, making it an attractive choice to many buyers. It also comes with peace of mind, thanks to its impressive warranty. At the same time, this is not an SUV designed with off-roading in mind. It also reserves some of its driver aids for the very top trims.

As for the 2020 Nissan Rogue, it has perks such as a large cargo area. It also has a nice amount of standard technology features and impressive fuel economy to factor in. On the downside, the only available transmission seems to struggle on the highway and it has an above-average starting price.

It can be hard to choose the right new vehicle in such a crowded market. Buyers who find themselves considering these two options for their next crossover compact SUV will need to know how they are the same as well as different in order to make an informed choice. This is a guide that makes it easier to see how the 2020 Hyundai Tucson and 2020 Nissan Rogue stack up.

Two engines have to be considered when shopping the 2020 Tucson. For the first two trim levels, buyers will find a 2.0L four-cylinder engine that produces 161-horsepower and 150 lb-ft of torque underneath the hood. The top three trim levels go with a 2.4L four-cylinder instead. Tucson models with this engine are able to produce 181-horsepower and 175 lb-ft of torque. Properly equipped versions of the Tucson can only tow up to 1,000 pounds.

There is only one transmission available for the 2020 Tucson. It is a six-speed automatic that seems to struggle at times to find the right gear. Front-wheel-drive is standard across the line but buyers who want all-wheel-drive have that option as well.

For the Nissan Rogue, there is only one powertrain available. It is a 2.5L four-cylinder that provides 170-horsepower and 175 lb-ft of torque, putting it roughly in between the two Tucson choices. A continuously variable transmission is standard and seems to have a hard time keeping up. Like the Tucson, the Rogue comes with front-wheel-drive standard with the option of upgrading to all-wheel-drive for a bit more. The maximum towing capacity is not much more impressive here, with properly equipped vehicles able to handle only 1,102 pounds.

Fuel economy is often a deciding factor for buyers. The Tucson offers disappointing numbers for a vehicle of its size. With the base engine, drivers will see just 23mpg in the city and 28mpg on the highway. Those who opt for the more powerful engine will drop down a tad, seeing 22mpg city and 27mpg highway.

The Rogue, on the other hand, gets drivers 26mpg in the city and 33mpg on the highway. Accordingly, the Rogue is the clear winner in the fuel economy battle with the Tucson. Even going up to all-wheel-drive, which drops both numbers down by one, the Rogue will still give buyers better numbers than they'd see in a front-wheel-drive Tucson.

As for reliability, both of these vehicles have done well. J.D. Powers awarded both the 2020 Tucson and the 2020 Rogue with four out of a possible five stars. This is better than average and a great selling point for both options.

Whether the Nissan Rogue or Hyundai Tucson is more comfortable to ride in partially depends on where one sits. The Rogue has more room in the front seats, with 41.6-inches of headroom and 43-inches of legroom. This is compared to 39.6-inches head and 41.5-inches legroom in the Tucson. The Tucson does have slightly more shoulder and hip room in the front, however.

When it comes to cabin materials, buyers will find that the Rogue manages to come off a little classier than the Tucson. It has more soft touch surfaces, whereas the Tucson has quite a bit of hard plastic. Standard for both options is cloth upholstery.

For the Tucson, all models except the entry-level SE add heated front seats as well as power-adjustment for the driver's seat. The SEL and up add dual-zone automatic climate control, while from the Limited on buyers get leather upholstery. The Limited model also adds a heated steering wheel and power-adjustment for the front passenger. At the top of the line sits the Ultimate trim, which gains heated rear seats and ventilation for the front ones.

There are only three trim levels for the Rogue. Skipping over the entry-level S for the SV or SL will mean getting heated front seats. They also come with power-adjustment for the driver, a leather-wrapped steering wheel, and the dual-zone automatic climate control. The SL option has similar features to the Tucson Ultimate, including leather upholstery, power-adjustment for the front passenger, and a heated steering wheel. Buyers should note that they cannot get ventilated front seats or heated rear seats inside any model of the Rogue, however.

As far as ride comfort goes, drivers will find little to complain about in either the Tucson or the Rogue. They both offer a smooth ride that can absorb road bumps fairly easily. The Rogue does offer more steering feedback, however, making it more fun to drive than the Tucson.

Technology features are intuitive and extensive for both the Tucson and the Rogue. Both come standard with Android Auto and Apple CarPlay for every trim level. They both also have Bluetooth and multiple USB ports for further connectivity. Since both offer a combination of physical knobs and touch controls it is difficult to say which system is easier to use.

It is worth noting that while both come standard with 7-inch touchscreens, the Tucson also offers an 8-inch option. On the flipside, the Rogue comes standard with satellite radio, which is merely an option for the Tucson. HD radio, premium sound systems, and navigation are available features for both.

Although both the 2020 Tucson and 2020 Rogue come with plenty of active driver aids, buyers will find that the Nissan has more. Standard for the Tucson is a rearview camera, lane-keep assist, a driver drowsiness monitor, and forward collision warning with automatic emergency braking. The Rogue also has forward collision warning with automatic emergency braking, as well as a rearview camera. Its other standard driver aids are a blind-spot monitor, rear cross-traffic alert, lane departure warning, pedestrian detection, and automatic high beams.

Blind-monitoring, pedestrian detection, and rear cross-traffic alert are all available on upper trim levels of the Tucson. Drivers can also get a surround-view camera system as well as adaptive cruise control. For the Rogue, available driver aids include lane-keep assist, rear parking sensors, rear automatic emergency braking, and adaptive cruise control. It, too, can be equipped with a surround-view camera setup.

The National Highway Traffic Safety Administration gives the Tucson a slight edge over the Rogue. It gave the Tucson five out of five stars in crash testing, including five stars in front and side-impact tests. The Tucson received four stars in rollover testing.

Those are the initial costs, but how much will these SUVs cost over time? When comparing the entry-level models of both vehicles over a five year period, the numbers are nearly identical. Buyers who drive approximately 15,000 miles a year can expect to spend around $10,300 on either the Rogue or the Tucson.

Considering the fact that the Rogue gets much better fuel efficiency, it is a bit surprising that it costs nearly as much to drive over time as the Tucson. While it is true that the Rogue will cost drivers around $2,000 less in fuel over five years, its projected maintenance costs are considerably higher than those of the Tucson. In fact, the Rogue is estimated to cost drivers over $5,500 in this category, compared to around just $3,500 in the Tucson.

Both the 2020 Nissan Rogue and the 2020 Hyundai Tucson fall in the middle of the compact SUV rankings. The Rogue costs more but has more standard safety features and better fuel efficiency. At the same time, the low price of the Tucson and long warranty is hard to ignore. So which is the better choice?

For buyers on a budget, the Tucson is the obvious choice. It has a decent number of standard features and will not cost more to own over time than the Rogue would, despite fuel economy numbers that are lacking. The long coverage of the warranty is also reassuring, proving that Hyundai believes they have made a high-quality product that is built to last, despite its low price.

Those who spend a lot of time on the road, however, may find themselves willing to pay extra for the Rogue. Its more engaging drive is going to be a big draw. It also has more cargo space, making it a better choice for those long weekend getaways or for big grocery shopping trips.

Save Money on a 2020 Hyundai Tucson:
Are you Shopping for a New Vehicle? Find the Best Deals with "Free - No Hassle" Prices Quotes.