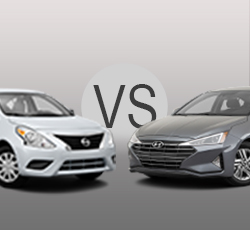 Buyers who need a practical commuter will want to learn more about the 2020 Nissan Versa and 2020 Hyundai Elantra. Both of these vehicles offer a long list of perks. At the same time, they both fall short in some important ways. So which is the smarter choice?

The Versa is kicking of a brand new generation in 2020. It has a sleek new exterior look and a fresh design for the cabin. Drivers also now get more power from the standard engine as well as more available advanced safety features. On the other hand, the backseat is smaller and acceleration is still a bit of an issue for this subcompact sedan.

Hyundai's Elantra is still in the generation is kicked off back in 2017. It manages to keep up with the competition by adding new standard features, such as dual-zone automatic climate control. The Elantra also gets a more efficient automatic transmission to help it keep up with the other vehicles in its class. However, the Elantra also has a cramped backseat and also does not offer drivers any thrills behind the wheel.

On the surface, it may seem like the new Versa and Elantra share the same strengths and weaknesses. A closer look will reveal that these are actually very different vehicles. To assist buyers in choosing between the two, the following guide will point out the differences and how they will impact daily life.

For the 2020 Versa, Nissan sticks with only one engine option. The 1.6L four-cylinder makes 122-horsepower and 114 lb-ft of torque. While this may be more than Versa models previously made, it is still fairly weak compared to the competition. Base models of the sedan get a five-speed manual while upper models go with a continuously variable transmission.

The standard engine for the 2020 Elantra is a 2.0L four-cylinder that can make 147-horsepower and 132 lb-ft of torque. While these numbers are better than the Versa's, they are still far from impressive. Buyers should also keep in mind that the Elantra is a larger vehicle than the Versa. A new continuously variable transmission comes standard with this engine.

A buyer who has their heart set on more power can go with the top-of-the-line Elantra Sport trim. It has an exclusive turbocharged 1.6L four-cylinder that pumps out 201-horsepower and 195 lb-ft of torque. There is also the slightly more fuel-efficient turbocharged 1.4L four-cylinder to consider. It makes 128-horsepower and 156 lb-ft of torque and is only available in the Eco trim. Both of these engines use a dual-clutch seven-speed automatic transmission instead of the CVT.

For some consumers, the fuel economy estimates for the Versa will make up for its lack in other areas. With the manual transmission, drivers can expect 27mpg city and 35mpg highway. Going with the CVT means getting even more impressive numbers, with estimates sitting at 32mpg city and 40mpg highway.

Braking statistics have the Elantra coming out ahead. The front rotors for most trim levels are 11-inches. Going with the Sport trim means getting 12-inches instead. All models of the Versa have 10-inch front rotors. As a result, the Elantra can go from 60 to 0mph in just 116 feet. It takes the Versa 124 feet to accomplish the same.

J.D. Power offers buyers an estimation of how reliable a vehicle will be in the future. For the Versa, they gave three out of five stars. This is considered about average. The Elantra, on the other hand, got a very impressive score of four out of five stars.

Both of these sedans are designed to seat up to five people. The front row of the Versa is actually a bit roomier, offering up 44.5-inches of legroom. This is significantly more than the Elantra's 42.2-inches. On the flip side, the back passengers get only 31-inches of legroom in the Versa but 35.7-inches when in the Elantra.

Although the Versa has more legroom in the front, it lags behind the Elantra in all other measurements. Buyers will find more head, shoulder, and hip room in the front of the Hyundai sedan. The same is true in the backseat.

The Versa is going to be the easier option for maneuvering into tight parking spaces and around busy city streets due to its smaller size. This sedan is 177-inches in length, which is nearly five inches shorter than the Elantra. The Versa is also nearly 2.5-inches narrower in comparison to the Hyundai sedan. It is worth noting that the Versa is a bit taller, measuring in at 106.3-inches while the Elantra is just 103.1-inches in height.

When comparing ride quality, the Elantra comes out on top due to the fact that it absorbs the bumps in the road more efficiently. Neither of the options is particularly athletic, however. The Versa struggles with body lean on corners which may negatively impact the ride comfort.

The optional tech features for the Versa and the Elantra are similar. Select models can be equipped with an 8-inch touchscreen and satellite radio. The Elantra has more optional features to offer, including a premium stereo system, HD radio, and wireless device charging.

Crash tests performed by the National Highway Traffic Safety Administration help the Versa look like a more appealing option. It received an overall score of five out of five stars. It got five stars for both frontal and side crash testing. As for rollover testing, it received four stars. The Elantra received only four stars overall in the same tests. This is due to the fact that it got four stars in all three categories.

Testing done by the Insurance Institute for Highway Safety is a little more encouraging for the Elantra. It received a score of "Good" in all six of the crash testing categories. Headlights are a different story, however, with some trims getting a "Good" rating while others received "Poor." Overall, the 2020 Elantra was named a top safety pick.

The Nissan Versa sedan has only been tested in two categories by the IIHS. They are "moderate overlap front" and "side" crashworthiness. It received a score of "Good" in these tests.

Standard safety features between the two options are quite similar. They both come equipped with anti-lock brakes as well as driver, passenger, front side, and curtain airbags. It is worth pointing out that the Versa also has rear side airbags while the Elantra does not.

The Versa offers a driver attention monitor. Both options offer blind-spot monitoring, rear cross-traffic alert, and adaptive cruise control. The Elantra also offers the lane departure warning and automatic high beam features that buyers get standard on the Versa. A rear-seat reminder is standard on select models of the Versa. It will remind drivers to check their backseat if the back doors were opened prior to the start of the journey.

An easy-fill tire system is standard on all models of the Versa. It alerts drivers when a tire has been filled to the proper pressure. This is not a standard or available feature for the 2020 Elantra.

One of the biggest draws for the Nissan Versa is its low starting price. Buyers can get it for just $14,730. Not so long ago, the Versa was actually the cheapest new car available. While this is no longer the case, it is still quite affordable for a brand-new car.

The Elantra's entry-level trim, on the other hand, will set buyers back at least $18,950. The argument could be made that this is justified by the more powerful engine and better warranty. However, the Versa comes with a larger touchscreen and more driver aids, potentially making it the better value here.

Of course, the initial price is not the only thing to keep in mind when it comes to how much a vehicle is going to cost. Savvy buyers also factor in out-of-pocket expenses as well as how much a vehicle is estimated to depreciate. This gives a better picture of how well a vehicle will fit into the buyer's budget.

Moving onto to the Elantra, it is going to cost roughly $15,750 in out-of-pocket expenses. This is less than the Versa, largely due to fuel costs. At the same time, the Elantra is estimated to lose just over $13,000 in value in five years. Due to this, this Hyundai sedan will also cost almost $29,000. As a result, the cost of ownership is not a determining factor when deciding between the two.

The Elantra is going to be an appealing choice for drivers who like to play it safe. It may cost more, but it also has a great predicted reliability rating as well as a phenomenal warranty. The Elantra is also more fuel-efficient and powerful, which is an enticing combination for pretty much everyone.

As for the Nissan Versa, this will appeal to the more frugal shopper. This option is definitely not lacking when it comes to standard and available features, making it a great value. It also has more driver aids and did better in safety testing, potentially making it the better small family sedan.

Save Money on a 2020 Nissan Versa:
Are you Shopping for a New Vehicle? Find the Best Deals with "Free - No Hassle" Prices Quotes.