2017 Subaru Forester Pros vs Cons. Should You Buy? 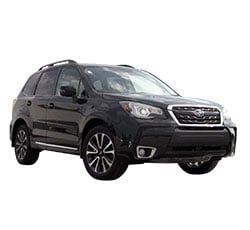 Should You Buy a 2017 Subaru Forester? Here Are Some Reasons For and Against

Loaded with cutting-edge safety features and offering a comfortable, roomy interior, the 2017 Subaru Forester is a real standout in the world of compact crossover SUVs. An available turbocharged engine lends this Subaru plenty of pep, but the continuously variable transmission may miss the mark for some drivers. Largely redesigned since last year, the 2017 Forester is worth a closer look.

Subaru stopped short of completely redesigning the 2017 version of the Forester. Still, the manufacturer made many much-appreciated changes, including the addition of extra noise insulation for an even quieter driving experience. A few small exterior styling changes were made and are likely to go mostly unnoticed. However, the EyeSight safety system has been upgraded to include lane departure intervention and a blind-spot monitor with rear cross-traffic alert. Reverse automatic braking, adaptive LED headlights and automatic high-beam control have all been added as available options.

Despite being a compact crossover SUV, the latest Subaru Forester offers a surprising amount of interior space. Indeed, two full-size adults can comfortably sit in the backseat along with a small child, if need be. Large windows add to the spacious, airy feel of the interior of the 2017 Subaru Forester.

Those who need a lot of cargo space will be tickled by the 2017 Forester. Behind its back seats, the base 2.5i trim has 34.4 cubic feet of cargo space. When the 60/40 split folding rear seat is folded down, however, that number jumps to 74.7--almost four more cubic feet than the Honda CR-V. All other trims include the panoramic sunroof, so the roof is lower. This means that cargo space is reduced to 31.5 cubic feet behind the seats and 68.5 with the seats folded down.

When equipped with the continuously variable transmission, 2.5i models have a fuel economy of 28 mpg combined--26 mpg in the city and 32 mpg on the highway. For a small crossover SUV, this is excellent. Fuel economy drops a bit with the standard transmission, but it is still very good for this class.

The latest Subaru Forester is offered in six trim levels. Base/2.5i, 2.5i Premium, 2.5i Limited and 2.5i Touring all come with a 2.5-liter 4-cylinder engine. The real excitement is in the 2.0-liter 4-cylinder turbocharged engine, which is standard on the 2.0XT Premium and 2.0XT Touring trims. It delivers a whopping 250 horsepower and 258 pound-feet of torque while still managing to be very fuel efficient.

While some would argue that the base model of the 2017 Subaru Forester is a bit sparse in terms of features, it comes standard with many that aren't included on other base models. Standard features include Bluetooth, a rearview camera, a 6.5" touchscreen with the Starlink technology interface, a 60/40-split folding backseat, smartphone app integration, a height-adjustable driver's seat and a sound system with a HD radio, CD player, auxiliary audio jack and a USB port.

For 2017, Subaru has loaded the Forester with an array of great standard safety features, including a rearview camera, side curtain airbags, front side airbags, driver knee airbags, antilock disc brakes and traction and stability control. The Starlink system, which is standard on most Foresters, delivers automatic collision notification, emergency assistance and door unlock, stolen vehicle notification and other remote services.

Blind spots aren't an issue with the newest Forester, as the crossover boasts massive windows. Also, the back seat is elevated, which further enhances visibility. Of course, the standard rearview camera helps too.

Although it's not a Jeep, the 2017 Subaru Forester holds its own off roads. It is helped along by its very high ground clearance as well as by the X mode traction control system with hill-descent controls.

In addition to offering plenty of space for four full-size adults, the 2017 Forester has a simple yet attractive interior design. The elevated rear seats provide exceptional thigh support and extra legroom, which is nice, and even the base model has a snazzy touchscreen interface with smartphone app integration.

Previous incarnations of the Forester suffered from excessive road noise--especially when traveling at highway speeds. Luckily, Subaru has addressed this by adding more noise-cancelling insulation, and it helps.
Buying Tip:

Reasons Not to Buy a 2017 Subaru Forester – The Cons

Loaded with great features though it may be, this crossover misses the mark in a few ways, including:

Although the CVT on the 2017 Subaru Forester enhances fuel economy, it suffers from high-RPM noise when hard acceleration occurs. It also tends not to be quite as responsive as the standard automatic transmission.

Due to its height and the nature of its suspension, the 2017 Forester leaves something to be desired when it comes to traveling on curvy roads. Cornering is not its strong suit, but most drivers won't be too bothered by this.

Although the base model comes standard with quite a few features, it still lacks many prime features that are included on all other trims. It is well worth it to upgrade to one of those trims--especially the ones that include the turbocharged engine. The fact that AWD is standard on all trims mitigates this issue to a certain extent.

With standard all-wheel drive across all models, a powerful available turbocharged engine, great fuel economy and tons of cargo space, the 2017 Subaru Forester is one of the top offerings in the compact crossover SUV category. It has broad appeal and is sure to meet the needs of most drivers.