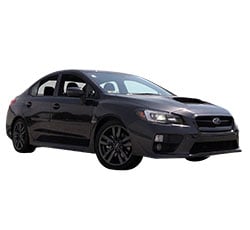 Should You Buy a 2017 Subaru WRX? Here Are Some Reasons For and Against

Although it may not offer the most refined cabin or the kinds of bells and whistles that are found on other sedans, the 2017 Subaru WTX delivers a fast, fun driving experience that is sure to please those who have a need for speed. Virtually unchanged from last year, the 2017 WRX is a unique option to consider in the compact sport sedan field.

Subaru held off on making very many changes to the 2017 version of the WRX. However, all models now come standard with auto-up switches for the front windows and automatic headlights. Additionally, the Eyesight safety package now offers reverse automatic braking for extra safety.

Some of the best reasons to purchase the 2017 WRX include:

The 2017 Subaru WRX isn't really designed for those who require tons of creature comforts. Instead, it's meant for people who want to feel speed and power at their fingertips. Handling is exceptional, and cornering is a dream. Thanks to the all-wheel drive, which comes standard on all models, it also offers excellent traction even when traveling on wet, slick roads.

Because the 2017 WRX is designed with speed and power in mind, it makes sense that all models come standard with all-wheel drive. This configuration makes the most of the two turbocharged engines as well as the six-speed manual and continuously variable transmission. Drivers who live in wet or snowy areas will especially appreciate this touch.

Base models of the Subaru WRX for 2017 include an array of compelling standard features. The base WRX trim includes a rearview camera, a trunk lid spoiler, automatic climate control, cruise control, a 60/40-split folding back seat, Bluetooth, sporty front seats with cloth upholstery and the Starlink six-speaker infotainment system with a 6.2" touchscreen interface, an auxiliary audio jack, smartphone app integration, a USB port and a CD player.

The 2017 Subaru WRX can be jazzed up with a variety of exciting dealer-installed options. These include unique shift knobs, an auto-dimming rearview mirror, carbon fiber trim, interior lighting accents and a performance exhaust.

It's easy to stay safe while behind the wheel of the latest Subaru WRX thanks to the many standard safety features that are included on all models. These include driver knee, side curtain and front seat side airbags; antilock disc brakes; traction and stability control; and active front head restraints. Optional safety features include a lane departure warning system, blind spot monitoring and rear cross-traffic alert.

Visibility is never an issue with the 2017 Subaru WRX, as the car has very few blind spots to worry about. The few that do exist can be managed with the option blind spot monitoring technology. Large side mirrors give drivers a clear view around them, and thin roof pillars further enhance visibility.

The 2017 Subaru WRX has all kinds of get up and go. The WTX with the manual transmission can go from zero to 60 in just 5.4 seconds. The STI with the same transmission cuts that time down to a nimble 5 seconds flat, which makes it the leader in its class in terms of acceleration. This responsiveness adds to the overall fun of driving this sedan.

Purists will insist on the manual transmission, which definitely unleashes the sedan's most roadworthy features. However, the clutch on the manual can be difficult to modulate consistently and smoothly, and this may be troublesome to some drivers. Fortunately, a continuously variable transmission is also available.

A few drawbacks of the latest version of this sport sedan include:

Unlike most sedans in this class, the 2017 Subaru WRX is not offered in a hatchback version. This undoubtedly limits the potential pool of customers, as hatchback styles offer more cargo space and versatility.

No one is going to buy the 2017 WRX for its interior. It's not bad, per se--just a bit utilitarian. Although it's a bit better than last year's model, road noise and wind noise continue to be a problem--especially when traveling at highway speeds.

As a sedan, the Subaru WRX isn't designed to have a ton of cargo space. However, its trunk only offers 12 cubic feet of space, which is below average for vehicles in this class. Since no hatchback version is available, this is a bit of a liability.

Even though it falls short in terms of cargo space and doesn't offer the plush, luxurious environs that many drivers insist upon, the 2017 Subaru WRX is a fun, thrilling sports sedan with plenty of power and excitement to spare.